The construction business is also expanding as a result of the rising demand for green and energy-efficient buildings, due to their related advantages, such as improved indoor environmental quality and a lower overall load on metal structures compared to conventional settings. Consequently, it is expected to drive the demand for building and construction plastics. 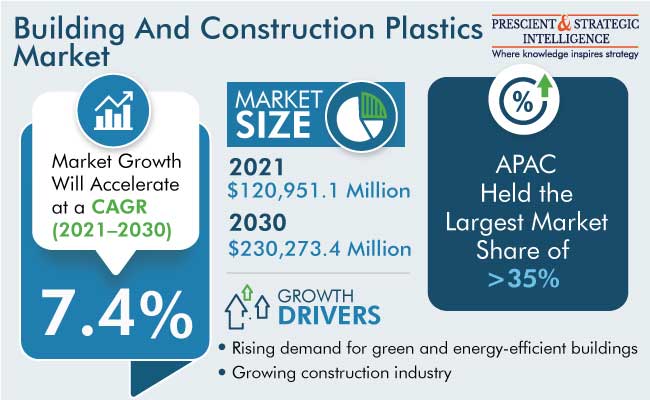 The market is fragmented due to the existence of several important players as well as small- and medium-sized regional firms doing business in various regions of the world. The regional players with strong distribution networks and in-depth regulatory knowledge compete fiercely with major companies in their respective regions. The players in the industry compete on the basis of the product quality they offer along with their advanced plastic production techniques.

The cost of finished products is significantly influenced by raw materials used to make plastics. Therefore, it is projected that the price of raw materials, including ethylene, vinyl chloride monomer, and styrene, would have a significant impact on the market for building and construction plastics throughout the forecast period. Most firms compete in the global industry by employing methods, such as strategic partnerships, mergers and acquisitions, geographical expansions, and the development of new products, to increase their market share and presence in various geographies.

The expansion of the manufacturing sector in developing nations is being driven by rapid industrialization and the rise in the number of skilled workers. Additionally, the improving economic growth and a corresponding surge in consumer spending in these countries are driving the demand for buildings and consumer goods, which, in turn, is boosting the need for plastics in a variety of applications like the construction of structures, as well as housewares and convenience goods.

Polyvinyl Chloride Is the Largest Revenue Contributor to the Industry

Polyvinyl chloride (PVC) is the largest category, which accounted for more than 30% of the total market share, in terms of revenue, in 2021. PVC is one of the major thermoplastic polymers, which are widely used in building and construction applications, globally. PVC is utilized in the construction industry for applications, including roofing, windows, doors, and ducting. Due to its properties, including hardness, strength, thermal conductivity, scratch resistance, design flexibility, insulation, durability, and cost-effectiveness, it is also utilized in pipes and fittings.

Whereas, the polyethylene category will grow at a tremendous rate in the coming years. In addition to roofing, it is utilized in construction as vapor retarders, window films, flooring, and countertop protectors. Polyethylene sheets can be used in lead abatement initiatives to cover construction materials and close off rooms. Polyethylene helps conserve energy and water by generating almost leak-free pipelines that are resistant to corrosion and environmental stress. Thus, being an important material, its demand is increasing during the construction of buildings. 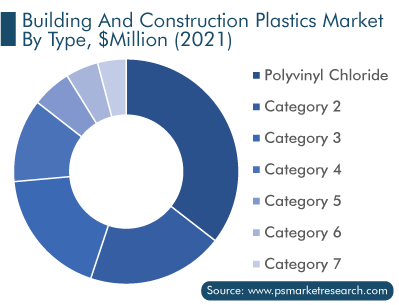 The demand for building and construction plastics in roofing applications is projected to be driven by their characteristics, such as high strength, weather resistance, excellent transportation efficiency, simple to install, high rigidity, and low weight. The growing public awareness of plastics' potential to replace conventional roofing materials is another factor fueling the sector's expansion. In addition, the high recycling rates of some plastics and the increasing popularity of green construction projects will open up new industry prospects.

Moreover, these plastics are mostly used to insulate walls and roofs, which aid in thermal insulation, sound insulation, and fire protection. By limiting leakages, they keep a building's temperature at a comfortable level. They also help regulate moisture and save energy. The two main materials utilized in insulating applications are polyurethane and polystyrene.

Pipes & ducts are the largest application category in the market, which accounted for more than 30% of the total revenue share in 2021. For a variety of purposes, including water service, plumbing, hydronic heating and cooling, fire prevention, snow melting, and geothermal piping, plastic pipes and tubing systems are utilized both inside a building and on the exterior of the property.

Plastics are frequently used to make windows because they are more affordable than other materials like wood and aluminum. Plastics also offer better insulation than conventional materials, are lightweight and waterproof, and require little maintenance. Therefore, during the course of the projection period, the aforementioned reasons are projected to increase the sales of these polymers for windows applications. 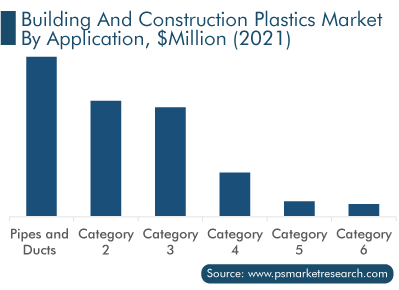 The building and construction plastics market growth in North America is being fueled by the growing industrial infrastructure, increasing product commercialization, and rising need for PVC, PP, and PE-based plastics in the construction sector in the U.S. and Canada.

The European market is expanding steadily and will keep doing so during the projection period. The main nations in the region that make these plastics are Germany, Italy, Spain, France, and the U.K. The surging greenhouse gas emissions are predicted to increase consumer need for plastics in the building sector, along with sustainability and environmental awareness. Moreover, the expansion of the construction industry in the region is projected to be fueled by favorable macroeconomic conditions and the development of industrial facilities in European nations, which is therefore expected to increase the need for these plastics throughout the forecast period.

The APAC region is projected to hold more than 35% market share in 2030. APAC has experienced a significant increase in demand for these polymers as a result of increased attention being paid to infrastructure development, rapid economic expansion, an improvement in living standards, and the rise in disposable income, particularly in emerging markets of the region.

Due to the economic and industrial growth, the LATAM market is projected to experience significant growth during the forecast period. The growing construction industry is being fueled by the rising GDP, particularly in countries like Argentina, Brazil, and Chile, as well as increasing disposable income. Thus, these factors are expected to have a positive impact on the market outlook in the coming years. Also, the market is being accelerated by the accessibility to raw material suppliers and the low cost of manufacturing in the region.

The consumption of these plastics in MEA has increased significantly and will continue to rise in the coming years. This is due to the accelerated construction of infrastructure and water distribution systems in nations such as Saudi Arabia and Turkey.

Top Players in the Building and Construction Plastics Market Are:

Frequently Asked Questions About This Report
What was the size of the building and construction plastics market in 2021?+

What will be the growth rate of the building and construction plastics market during the forecast period?+

During 2021–2030, the growth rate of the building and construction plastics market will be around 7.4%.

Which is the largest application area in the building and construction plastics market?+

Pipes and Ducts is the largest application area in the building and construction plastics market.

What are the major drivers for the building and construction plastics market?+