The global brain implant market was valued around $4.5 billion in 2020. The major factors contributing to the growth of the market are the increasing cases of neurological disorders, such as Alzheimer’s, epilepsy, Parkinson’s, and essential tremors; rising healthcare expenditure, growing geriatric population worldwide, and surging number of people with depression.

As a result of the COVID-19 pandemic, governments in a number of nations have enforced lockdowns and social distancing measures to safeguard the public and break the infection chain. Owing to this, the economy of most of the nations has been severely affected. Though there is an increase in the healthcare expenditure presently, most of the resources are diverted to COVID response. This has shifted the focus from other healthcare services, thereby negatively impacting the global market for brain implant. 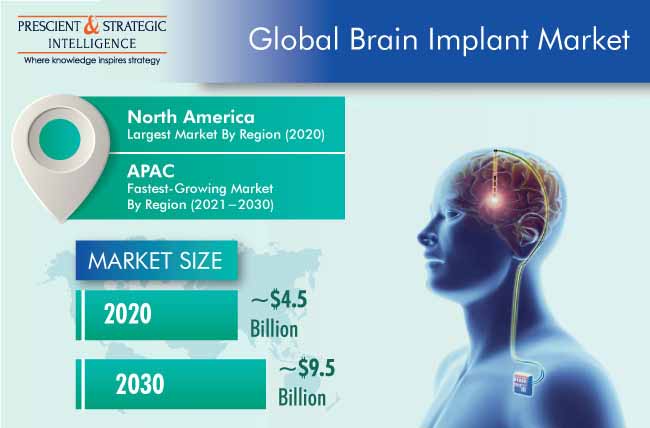 Due to Its Ability to Reduce Symptoms, Deep Brain Stimulation Devices Held Largest Share in Market

The deep brain stimulation category held the largest share in the brain implant market in 2020, based on type. This was majorly due to the several advantages of deep brain stimulation over other therapies, such as the reduction in the degree of stiffness, slowness, and walking difficulties caused by different neurological illnesses, such as dystonia, Parkinson's disease, and essential tremor. Patients who have not responded to medication for at least five years are often advised to try this treatment.

Due to Its Increasing Prevalence of Neurological Disorders, Chronic Pain Category Will Be Fastest Growing

The chronic pain category is set to be the fastest growing in the market during the forecast period, based on application. This will mainly be due to the increasing incidences of chronic pain among patients suffering from neurological disorders.

Due to Rising Incidence of Neurological Disorders, North America To Hold Largest Share

Geographically, North America is expected to lead the market for brain implant during the forecast period. This will primarily be due to an increase in the elderly population, technical developments in brain implants, presence of a large number of market players, and rising frequency with which new products are being approved. Furthermore, the rising cases of neurological illnesses, as well as the increasing expenditure on brain implant devices, will be the important factors driving the growth of the brain implant market in the future.

Due to Increasing Need for Long-Term Treatment, Asia-Pacific (APAC) To Witness Fastest Growth

Geographically, the APAC region is expected to grow fastest in the market during the forecast period. This will majorly be due to the increasing investments because of the lack of long-term treatment solutions for neurodegenerative and psychiatric disorders. Moreover, the healthcare infrastructure is rapidly improving, along with the affordability of the procedures, thus contributing to the growth of the market. 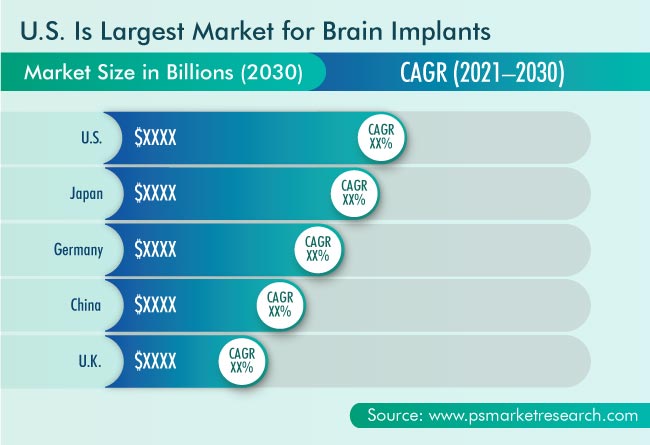 Globally, the brain implant market has witnessed a considerable number of product approvals during the last decade. For instance, in December 2020, the Food and Drug Administration (FDA) approved Boston Scientific Corporation's fourth-generation Vercise PC and Vercise Gevia deep brain stimulation devices. These implantable devices provide low-intensity electrical pulses to the nerve regions in the brain, by varying the amplitude, pulse width, and frequency. When medicine does not manage the signs and symptoms of advanced levodopa-responsive Parkinson's disease, patients utilize these systems as an extra treatment.

The increasing life expectancy and falling death rate are the major contributors to the growth in the geriatric population. According to the United Nations, globally, the proportion of the population aged 65 and above climbed from 6% in 1990 to 9% in 2019. This number is expected to further surge to 16% by 2050. The elderly require extensive care since they are more susceptible to neurological illnesses, such as Alzheimer's, epilepsy, Parkinson's, and essential tremors, as well as depression. Thus, the booming elderly population contributes significantly to the demand for improved brain implant technologies.

Growing Awareness about Neurological Diseases and Their Treatment Driving Market

Due to the various measures undertaken by for-profit and not-for-profit healthcare organizations across the world, the awareness of mental disorders has grown. The World Health Organization (WHO) has designated October 10th as World Mental Health Day in order to raise awareness on the various related illnesses, reduce stigma, promote access to services, and educate people about various treatment choices. Similarly, in the U.S., the National Alliance on Mental Illness (NAMI), a mental health organization active in treatment, support, research, and raising awareness about mental diseases, was founded in 1979 to offer support and psychoeducation to enhance the lives of those suffering from mental illnesses. Such initiatives are propelling the demand for brain implant devices.

In recent years, players in the industry have engaged in product launches to offer a better portfolio than their competitors.

Frequently Asked Questions About This Report
What was the value of the brain implant market in 2020?+

The value of the brain implant market was around $4.5 billion in 2020.

How much will the brain implant industry grow by 2030?+

The brain implant market will reach around $9.5 billion revenue by 2030.

What are the major brain implant industry trends?+

Product approvals and launches are the major trends currently being witnessed in the market for brain implants.

Which region will dominate the brain implant industry during 2021–2030?+

North America will hold the largest share in the market for brain implants between 2021 and 2030.

What are the major brain implant industry growth drivers?+

The mushrooming geriatric population and growing public awareness about neurological diseases and their treatments are the major factors driving the expansion of the market for brain implants.