In 2014, the global market for biomass pellet valued at $6,976.3 million, and is projected to witness a CAGR of 11.1% during the forecast period of 2015-2020. Further, Europe held the largest market volume, with a consumption of 20,000.0 million tons 2014. The major factors behind the region’s significant demand were low GHG emission from biomass and increased government initiatives for renewable technologies. This significant market in European region is expected to continue its global dominance, majorly owing to various subsidies and legislation. 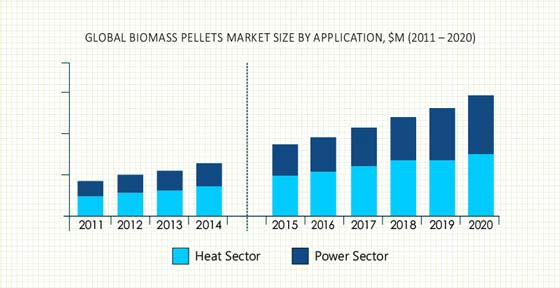 Biomass pellets can be produced from various sources such as timber industry, sawdust, woody plants, switch grass, and sugarcane crop, and commonly used as a heating fuel. The growing use of these pellets in power industry is impacting positively the growth of the biomass pellet market. Also, the rise in demand for renewable energy source is another important factor, which supports the adoption of these pellets in the power industry.

Based on the application, in 2014, the market demand of the heat sector stood at 14,256.0 million tons consumption volume, and is anticipated to reach 27,122.3 million tons by 2020, with a CAGR of 8.7% during the forecast period. In addition, the power sector is expected to witness the higher growth rate (12.4% CAGR) in the forecast period, in the global market.

On the basis of region, North American biomass pellet market stood second, both in terms of value and volume, in 2014. The major factors behind this growth in the region were strict environmental regulations, rise in demand of biomass pellets in industrial sector, and growing concern for global warming. Thus, in result, the significant rate of depletion of fossil fuels and growing demand for the reduction of greenhouse gases are creating growth opportunities for North American biomass pellet market players.

The major driving factor for growth of the market is the implementation of stringent environmental regulations throughout the major developed and developing economies across the globe is propelling the demand for efficient renewable energy sources. Fossil fuels, including coal, petroleum, and natural gas are the major non-renewable sources of energy. The growth trend of the global demand for fossil fuels remains in upward direction, which drives the rapid depletion of fossil fuels. Additionally, global warming is a key environmental challenge across the globe. In order to curb the carbon emissions, several governments and international organizations are making stringent environmental regulations. The usage of biomass pellets offer an efficient solution to control the global dependency on fossil fuels and reduce the emission of greenhouse gases in the atmosphere.

Further, the increase in the level of investments in the biomass industry has propelled the technological advancement. Also, there is an upsurge in co-firing of biomass with coal globally, since it is a carbon neutral fuel, which helps to reduce emissions from thermal power plants. The rise in demand for the biomass based power generation, along with traditional methods of power generation using fossil fuels is expected to fuel the growth of biomass pellets market globally.