The global bioethanol market stood around $38.0 billion in 2020, and is expected to grow at a significant rate during the forecast period. The major factors responsible for the growth of the market are the increasing need for sustainable alternative fuels, depletion of natural resources, surging energy consumption, and excessive greenhouse gas production. Moreover, the large amount of biomass available for its production is driving research in the domain, which is leading to the market growth.

Due to the COVID-19 pandemic, the market for bioethanol has been negatively impacted. This is mainly attributed to the reduction of vehicle usage during the lockdown. Moreover, manufacturing plants were temporarily closed, and the distribution network was also disrupted due to the strict government regulations implemented to curb the spread of the disease. This, in turn, resulted in the decreased sale of bioethanol across the world. 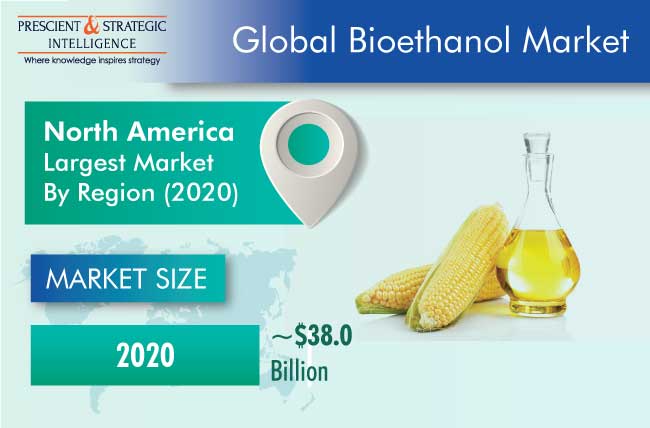 The E10 category held the dominating share in the bioethanol market in 2020, based on fuel blend. This can be attributed to the fact that it can be used in most new cars and light-duty diesel vehicles without any engine or fuel system modification.

The transportation category accounted for the largest share in the market for bioethanol in 2020, and it is expected to retain its position during the forecast period, based on end user. This will be majorly due to the rising adoption of bioethanol as a transportation fuel and biofuel blending mandates by several regulatory bodies. Bioethanol is more cost-effective and ecologically friendly as compared to other fuels, which also encourages people to use it in their automobiles.

The solid category accounted for the largest share in the bioethanol market in 2020, and it would have a substantial growth rate during the forecast period, based on feedstock type. This will majorly be due to the fact that ethanol derived from sugarcane is a sustainable fuel, with direct emissions up to 90% lower than those of gasoline or diesel. Ethanol produced from biomass has been considered a suitable automobile fuel since the invention of automobiles, particularly for vehicles powered by spark-ignition engines.

Geographically, North America contributed the highest revenue to the bioethanol market in 2020, and it is further expected to lead the market in the coming years. This will mainly be due to the large-scale production of bioethanol in the region in order to meet the demands of consumers. Additionally, the U.S. and Canada have mandated the usage of bioethanol blends in vehicles. Apart from the favorable biofuel policies, the rapid growth in the production of corn-based bioethanol, rise in crop yields, and surging focus on energy efficiency are propelling the market growth. 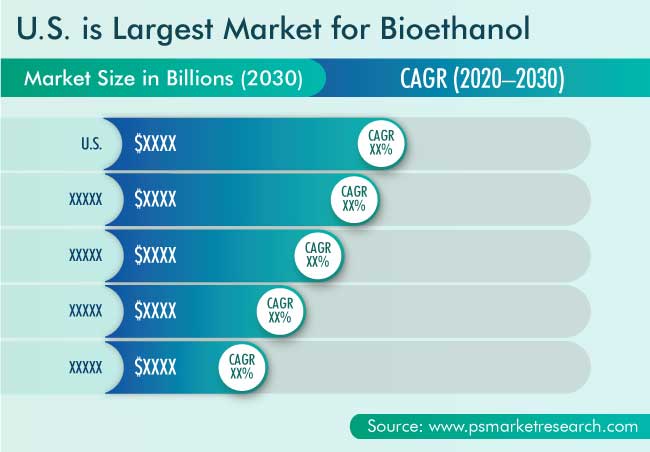 The increasing research activities for sustainable production methods of bioethanol are the major trend in the market for bioethanol. Extensive research is being conducted so that bioethanol production from plant residues, which are suitable to produce second-generation bioethanol (SGB), can be improved. To successfully replace petrol and diesel with bioethanol, many projects have been initiated. For instance, the European Union has launched the Bioethanol for Sustainable Transportation (BEST) project with six participating countries in order to develop bioethanol vehicles. Moreover, the New Improvements for Ligno-cellulosic Ethanol (NILE) project brings together 21 industrial and research organizations from 11 member states to research on bioethanol manufacturing.

The depletion of natural resources due to the booming energy consumption is one of the major factors leading to the advance of the bioethanol market. Non-renewable resources, such as oil and natural gas, which are used for the production of energy, are depleting at a high pace. Hence, to sustain the global demand, natural resources must be used more efficiently. Since bioethanol is mainly produced via the fermentation of the sugars derived from crops containing starch, it is a promising alternative fuel.

In recent years, players in the bioethanol industry have been involved in geographical expansions in order to attain a significant position. For instance,

The bioethanol market report offers comprehensive market segmentation analysis along with market estimation for the period 2015-2030.

Based on Fuel Blend

Based on Feedstock Type

Frequently Asked Questions About This Report
How much was the global bioethanol market worth in 2020?+

How did the COVID-19 pandemic impact the bioethanol market growth?+

The COVID-19 pandemic hampered the advancement of the bioethanol industry.

Which was the largest end use category in the bioethanol industry in 2020?+

The transportation category dominated the bioethanol industry, under the end use segment, in 2020.

Why did the bioethanol industry boom in North America in 2020?+

The market for bioethanol boomed in North America in 2020, because of the extensive production of bioethanol, on account of its huge requirement in the region.

What is currently trending in the market for bioethanol?+

The increasing research and development (R&D) activities being carried out for developing new and sustainable production methods is currently trending in the market for bioethanol.