The global biodiesel market generated revenue of around $39.0 billion in 2020. The major factors responsible for the growth of the market are the increasing demand for biodiesel to replace crude oil, surging research and development (R&D) activities on it, and different government initiatives and mandatory regulations for its adoption.

Due to the COVID-19 pandemic, governments of various countries have sealed their borders and enforced lockdowns to prevent the spread of the virus. This caused a major downfall in manufacturing, freight transportation, and logistics activities. In addition, there has been a major drop in automobile usage, which, in turn, has been reducing the demand for biodiesel since 2020 till date. Due to the above-mentioned factors, there is a negative impact on the market for biodiesel. 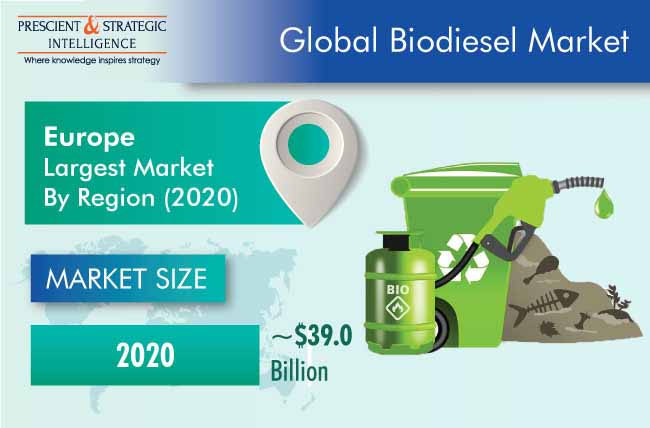 High Availability of Vegetable Oils Leads to their Domination

The vegetable oils category held the larger share of the biodiesel market in 2020, based on feedstock. This was mainly due to the easy availability of vegetable oils and their renewable nature. Moreover, oil crops provide a high oil yield, and they are cost-effective.

The fuel category accounted for the largest share of the biodiesel market over the past few years, and it is further expected to grow at the highest CAGR during the forecast period, based on application. This is attributed to the increasing adoption of biodiesel as a fuel in the automotive, agriculture, and marine industries. In addition to its eco-friendliness, biodiesel has better lubricity (50:1) than conventional diesel, which helps in reducing friction and wear in the engine.

Due to Balanced Performance, B5 Blend Held Largest Market Share

The B5 category held the largest share in the biodiesel market in 2020, based on blend. This is mainly attributed to the balanced performance, low emission, fuel economy, and cost-effective nature of B5 over other blends.

The pyrolysis process held the largest shares of the biodiesel market in 2020, and it is further expected to retain its position in the coming years, based on production technology. This is mainly attributed to the fact that it is relatively a simple and inexpensive technique for processing a wide variety of feedstock.

Geographically, the Europe region held the largest share in the biodiesel market in 2020. This is mainly attributed to the increasing implementation of government regulations and initiatives to mitigate greenhouse gas emissions. 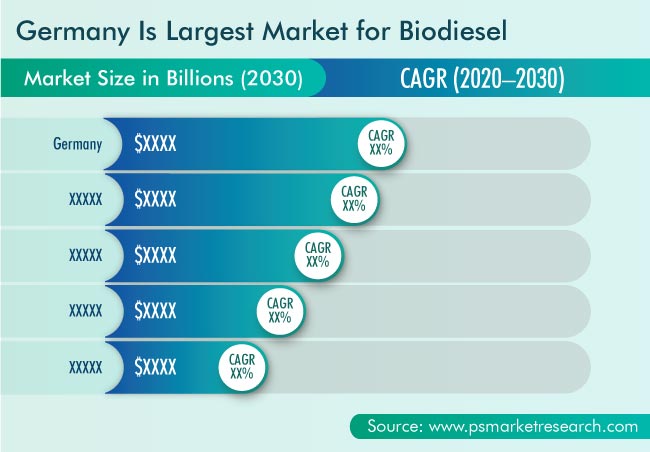 Investments in renewable energy, both in R&D and commercial production, have risen significantly during the current decade. Advanced technologies in genomics and biotechnology, process chemistry, and designing are being applied to deliver new kinds of energy feedstock and transform them into novel biofuels. On and off chances that these ventures prove to be fruitful, biodiesel can possibly replace a significant volume of crude oil in the coming years, with a restricted adverse consequence on food supply. Hence, the increasing research on new methods for the production of biodiesel is the key trend in the market for biodiesel.

Biodiesel emits 50% less carbon dioxide (CO2) and other greenhouse gases as compared to conventional fuel, and it is also free of sulphur and aromatic compounds. According to the U.S. Environmental Protection Agency (EPA) and U.S. Energy Information Administration (EIA), approximately 43 billion gallons of biodiesel were consumed in the U.S. in 2019. Biodiesel is a fuel that can be produced domestically and used in a diesel engine with little-to-no change to the engine or fuel system, thus allowing many countries to reduce their reliance on foreign oil reserves. These factors lead to the growth of the market for biodiesel.

Market Players Are Focusing on Collaborations for Competitive Edge

In recent years, players in the biodiesel industry have focused on collaborations in order to gain a significant position.

Key Players in Biodiesel Market Include:

The biodiesel market report offers comprehensive market segmentation analysis along with market estimation for the period 2015-2030.

Based on Production Technology

Frequently Asked Questions About This Report
How much was the global biodiesel market worth in 2020?+

Why did the biodiesel market growth slow down during the COVID-19 pandemic?+

The progress of the biodiesel industry slowed down massively during the COVID-19 pandemic, because of the disruptions in the transportation industry and the decline in automobile usage.

Which feedstock category dominated the biodiesel industry in 2020?+

The vegetable oils category dominated the biodiesel industry, under the feedstock segment, in 2020.

Which region dominated the biodiesel industry in 2020?+

Europe dominated the market for biodiesel in 2020.

Why is the market for biodiesel booming?+

The market for biodiesel is booming because of the increasing requirement for environment-friendly fuels across the world.