The global biocontrol agents market accounted for a revenue of $4,851.7 million in 2021, and it is set to increase to $13,634.3 million by 2030, advancing at a CAGR of 12.2% during 2021–2030. The rising use of biological products over chemical-based crop protection products driving the market growth. Moreover, the biocontrol agents are environmentally friendly, have no harmful effects on humans, and are effective throughout the season, making them ideal for pest control.

Europe held the largest market share in 2021, globally, and the regional industry is also expected to grow at a steady pace in the coming years, due to the strict regulations by governments on the use of chemical pesticides. For instance, Europe targets to reduce by 50% the usage of hazardous pesticides by 2030.

To meet the increasing demand for biopesticides, companies are actively involved in partnerships, which create several opportunities for market players. For instance, in May 2022, UPL Limited and Chr. Hansen Holding A/S signed a partnership agreement to launch ZOATIN, a new bio solution, which effectively facilitates plant uptake and utilization of phosphorus to improve crop health and yield. 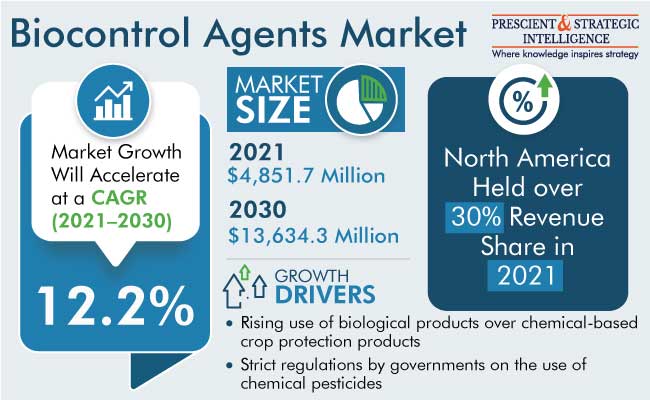 The microbials category held the largest biocontrol agents market revenue share, of around 60%, in 2021, and it is also expected to witness the fastest growth during the forecast period. This is because microbes have the magnificent ability to eliminate pests from the field and enhance crop production. Moreover, microbial agents are extremely precise against targeted pests, aid in the survival of beneficial insects in treated crops, and stimulate their growth.

Furthermore, microbicides, which are less harmful than chemical agents, characteristically distress only the target pests and other creatures closely related to them, as opposed to conventional insecticides, which can be injurious to other organisms such as insects, birds, and mammals. 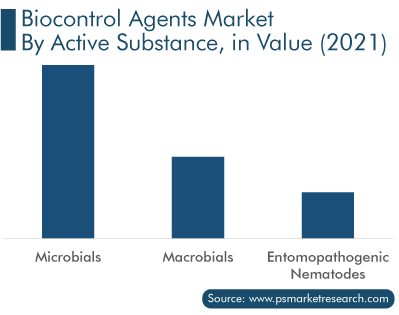 Organic farming is a distinct and rapidly expanding segment of the food industry. For instance, as per a government source, the demand for organic farming rose by 34% in 2021, as compared to the previous year, globally. In the U.K., it increased by 3.6% in the same year, as compared to 0.8% in 2020. Moreover, stringent regulations to stop the usage of synthetic pesticides, ionizing radiation, and chemical fertilizers, and produce biological items will boost the demand for organic products. For instance, companies must be certified in order to produce organic products, and also, there are specific organic standards for animals, crops, wildcrafted products, and agricultural processing products.

The organic certification and inspection in the EU are carried out by approved organic control bodies in accordance with EU standards. Similarly, in North America, since 2000, the National Organic Standards of the United States Department of Agriculture (USDA) have defined organic farming, and there are numerous accredited organic certifiers across the country. Thus, the increasing organic farming, along with the increasing resistance of pests against chemical agents, is driving the biocontrol agents market.

The cereals & grains category captured more than 40% of the market share, based on crop type, in 2021. This is primarily due to the high demand for cereals and grains by the growing population across the world, and pesticide residue is generally a source of concern among consumers in their food products. Moreover, as per the government source, farmers lost around 40–45% of crops due to pests, globally. Therefore, biocontrol agents are widely used to protect cereal & grain crops from damage.

On-Field Is the Most Popular Application

The on-field category held the largest share in the market in 2021. The elimination of some chemical pesticides and the numerous advantages of on-field services have a positive impact on the market growth in this category. Also, as on-field spraying is considered safe, most farmers use biocontrol agents on the field to increase crop yield.

Moreover, the seed treatment category held the second-largest market share in the same year. This is due to the easy availability and low cost of seed treatment products. Also, the treatment reduces the biotic stress while combating plant pathogens, resulting in increased crop production.

North America accounted more than 30% revenue shares in 2021. This is due to the abundance of fertile land available, the rise in demand for organic items, and the surge in awareness of the effectiveness of microbial pesticides.

Moreover, in the U.S., the highly developed agriculture sector has just begun to adapt to natural and organic farming methods. For instance, according to a source, the demand for organic farming rose by around 30% in the country in 2021. Consequently, there is an increasing tendency for the usage of biological control products. The main elements influencing the market in the nation are the increasing expense of chemical inputs, their negative impact on soil quality and the environment, and the growing awareness regarding balanced plant nutrition.

Moreover, conventional agriculture, recent revisions to municipal and provincial rules controlling the cosmetic use of pesticides, and legislation and the consequent marketing of lower-risk pest management methods all contribute significantly to the demand for biological control products in Canada.

Furthermore, in Europe, the major biocontrol agents market share is captured by France, due to the surge in consumers’ preference for organic products. Also, the organic area jumped by around 30% in 2021 in the country. France added around 5,000 organic farms in the same year. In addition, the early adoption of stringent regulations and policies for the usage of chemical agents in the country boost the demand for biopesticides in the nation.

Fruits and vegetables are exported from LATAM countries to various European countries, and prominently corn to China. So, farmers are using more biocontrol products as a result of strict rules against the use of chemical pesticides and the quantity of residue in food. Thus, countries such as Brazil, Argentina, and Mexico are increasingly adopting biopesticides over chemical agents. Moreover, regulations aiming at limiting the use of pesticides during agricultural processes are being pioneered by these nations. In addition, international biological corporations are also concentrating on the LATAM market and expanding the accessibility of their products through numerous channels in the region. Therefore, these factors drive the regional market growth. 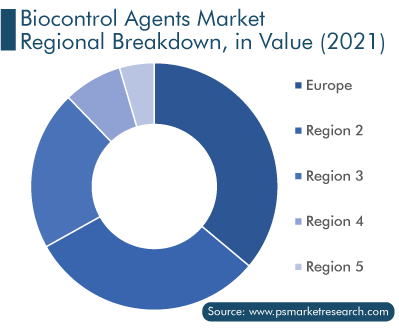 Key players in the biocontrol agents industry have been actively launching new products in order to enhance their product portfolios and achieve a larger market share. For instance:

In March 2021, Bayer AG announced the launch of Vynyty citrus, a crop protection product based on biological and pheromone to control pests on citrus farms. The product is currently being used in Spain and available to growers of citrus and other crops in other Mediterranean countries.

Similarly, in March 2022, Syngenta Crop Protection AG announced the launch of Spiropidion, a technology for insect control, which aids growers to guard their crops against destructive sucking pests in an environment-friendly and effective manner.

Top Producers of Biocontrol Agents Are:

Based on Active Substance

Based on Target Pest

Frequently Asked Questions About This Report
What was the size of the biocontrol agents market in 2021?+

What will be the growth rate of the biocontrol agents market during the forecast period?+

Which is the largest crop type in the biocontrol agents market?+

Cereals & grains are the largest crop type in the biocontrol agents market.

What are the major drivers for the biocontrol agents market?+

The major drivers of the biocontrol agents market include the rising demand for organic farming globally, stringent regulations against chemical fertilizers, and surging consumer preference for biocontrol agents.