The global battery management system market was valued at $5,661.0 million in 2020, and it is expected to grow at a CAGR of 15.0% during the forecast period (2021–2030). The key factors responsible for the growth of the industry include the increasing demand for electric vehicles (EV) and rising usage of rechargeable batteries in consumer electronics.

The COVID-19 pandemic forced governments around the world to impose various measures, such as temporarily suspending imports and exports, partially closing down manufacturing facilities, reducing the workforce, and locking cities down. Due to the above-mentioned factors, the market saw reductions in sales. Furthermore, since most of the offices were shut during the lockdown period, the supply chain of industry and that of related electronic component manufacturers was disrupted, thereby causing the manufactures to scale down or suspend manufacturing activities. 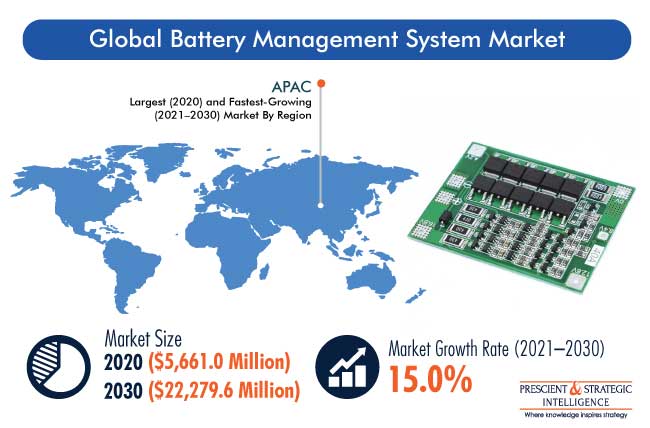 In 2020, the Li-ion category held the largest share in the battery management system market, mainly because Li-ion batteries have several advantages over other battery types, such as a longer life cycle, higher energy density, lower maintenance requirements, and better resilience. Furthermore, Li-ion batteries are eco-friendly, as they contain relatively lower levels of toxic heavy metals when compare to other battery types, such as lead–acid and nickel–cadmium (Ni–Cd).

On the basis of connectivity, the wired category held the larger market share in 2020, and it is further forecast to hold the larger share in 2030. This is mainly due to the fact that wired systems have a wide application area in consumer electronics and hence witness the higher demand.

Distributed BMS is installed with each battery cell using a single communication cable between the controller and battery. Distributed topology is easy to install and offers a better assembly of parts when compared to the other topologies, which is why it is preferred among the three topologies.

Automotive category to show the fastest growth in forecast period

Based on vertical, the major applications, the automotive industry is expected to witness the fastest growth in the battery management system market during the forecast period due to the fact that the adoption of EVs is increasing globally. Many governments across the world are introducing policies to promote the manufacturing and usage of EVs. Since the BMS is an important part of EVs, the market will be impacted positively by the surging environmental concerns and resulting adoption of such new-energy automobiles.

Asia-Pacific (APAC) to have largest market size during forecast period

Globally, the Asia Pacific (APAC) region was the largest market for battery management system in 2020 because China has been dominating the global EV industry for quite a while now. According to the Organisation for Economic Co-operation and Development (OECD), in 2018, 3.1 million electric cars are on the road globally, among which 1.48 million are in China alone. Hence, due to the strong presence of automakers, China is the largest market. Moreover, due to the above-mentioned reasons, the APAC region is projected to grow at the highest rate during the forecast period.

Similarly, the government is taking initiatives to promote EVs in order to reduce the emissions from petrol and diesel vehicles. For instance, government of India has launched the Faster Adoption and Manufacturing of (Hybrid &) Electric Vehicles (FAME) scheme in two phases to support 1 million two-wheelers, 500,000 three-wheelers, 55,000 four-wheelers, and 7,000 buses. Furthermore, the demand for Li-ion batteries is increasing there due to the high production volume of consumer electronics. 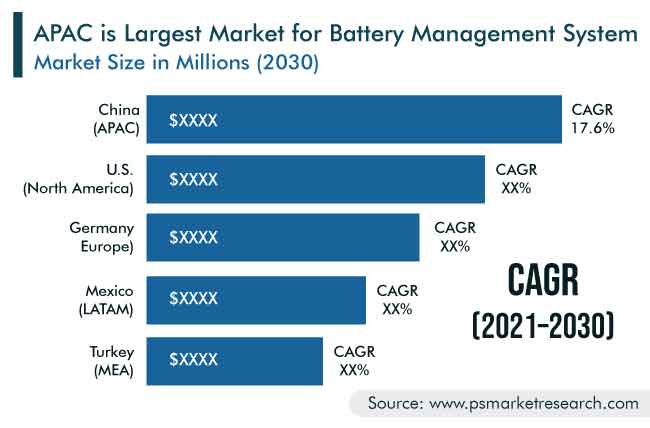 Increasing adoption of cloud-connectivity is a major trend

Cloud-connected BMS offers various advantages a, such as online monitoring and analysis of the battery data, estimates precise state of charging (SOC) and state of health (SOH), and helps identify the possible critical failures at an early stage. It also helps predict the remaining useful life of the battery cells, thereby allows for the monitoring of the condition of the battery. Due to such benefits, companies have started to adopt cloud-connected battery control systems.

Due to the presence of a great number of petrol- and diesel-engine-powered vehicles, global carbon emissions have increased significantly in the past few decades. According to Our World in Data, in 2018, the transportation industry generated 16.2% of the total greenhouse emissions around the world. Since EVs can help reduce the emissions, they will contribute toward reversing climate change and improving public health. Hence, since the BMS is an integral part of EVs, the rise in EV production will have a positive impact on the market for battery management system.

BMSs are used in consumer electric products to control the operation of the battery. Furthermore, they also manage rechargeable batteries by monitoring their state, collecting and reporting data, and monitoring the battery health. Since the usage of consumer electrics, such as mobile phones, laptops, digital cameras, and wearable devices, is increasing globally, the industry is being impacted positively.

They are focusing on product launches and mergers and acquisitions to improve their product portfolios. For instance;

Some Key Players in Battery Management System Market Are:

Frequently Asked Questions About This Report
What is the current battery management system market value?+

Which is the preferred topology in the battery management system industry?+

The distributed topology is the most popular among battery management system industry end users.

What is the regional scenario of the battery management system market?+

APAC is the largest and fastest-growing battery management system market.

Why is the battery management system industry growing?+

What is the battery management system market nature?+

The battery management system market has a fragmented nature.