The Middle East & Africa region offers significant growth opportunities to the baby diaper market players. The market in Saudi Arabia is primarily driven by rapid urbanization. On the contrary, the significant poverty among the population in Nigeria is a major factor hindering the growth of the Nigerian market. Wemy Industries Ltd. was the largest baby diaper manufacturer in Nigeria in 2015. 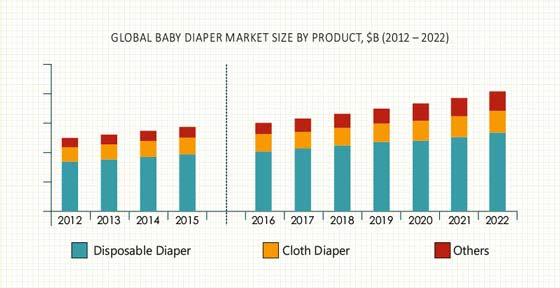 The North American baby diaper market is showing notable prospects for growth due to the increasing number of working women and increased awareness about potential applications of baby diapers in sanitation. According to an article published by the U.S. Bureau of Labor Statistics, the number of women in the workforce (number of people working or looking for work) increased from 18 million in 1950 to 66 million in 2000 in the U.S., and it is expected to reach 92 million by 2050. Working women are increasingly using disposable diapers, as they save time and offer convenience. Thus, the growing number of working women has increased the demand for baby diapers in the country.

Hybrid diapers include reusable inserts, called g-pant, diapers that are disposable and can absorb the waste output of the baby. Every year, ten billion disposable diapers are thrown away into landfills, where they take years to decompose. G-pant diapers are an environment-friendly alternative to regular disposable diapers, as they are organic and biodegradable. The materials used to make G-diapers are quite soft, comfortable, and breathable, which makes them preferred among mothers, thus creating growth opportunities for the global baby diaper market. Apart from their comfort and breathability, G-diapers are expected to boost the growth of the market, as they have become the preferred choice of mothers due to their chlorine and perfume-free nature. All the above-mentioned factors make hybrid diapers safe for a baby’s sensitive skin. With the growing advancement in diaper-making techniques, the development of hybrid diapers with two or three different parts, depending upon the baby’s fit, is expected to provide various growth opportunities in the near future.

According to the World Bank, the percentage of women in the workforce between 1990 and 2013 grew more than 4% in 60 countries. The growth in the baby diaper market is driven by the increasing number of women working outside their home. As many working mothers return to their jobs shortly after giving birth, baby diapers provide convenience for working women. The average disposable income of the family has increased because of the growing number of working women. This has increased the affordability for costly diapers, which has contributed to the growth of the market.

The overall threat of new entrants to the established players is medium in the baby diaper market. There are a number of factors balancing each other for the moderate intensity of threat by new entrants.

The presence of large players in the baby diaper market, such as Kimberly-Clark Corporation, Procter & Gamble, and Unicharm Corporation, display a high brand identity, and thereby lead to a low threat of new entrants. However, the access to distribution channels is high (as the baby diapers are easily available on small or big marts and shops), which makes the threat of new entrants high.