The autonomous mobile robots market value was $29.3 billion in 2019, and it is predicted to rise to $220.6 billion by 2030. Furthermore, the market is predicted to advance at a CAGR of 18.3% from 2020 to 2030. The burgeoning requirement for automation solutions and expansion of the e-commerce industry are the main factors fueling the advance of the market. 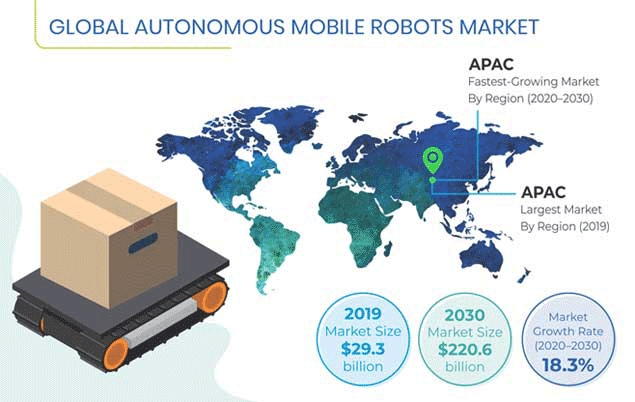 The boom in the global e-commerce industry is one of the major factors fueling the expansion of the market for autonomous mobile robots. Because of the increasing penetration of the internet and growing usage of smartphones, the popularity of online shopping is rising sharply, which is, in turn, propelling the advance of the e-commerce industry. As per various reports, e-commerce sales grew by nearly 22% from 2017 to 2018. The boom in e-commerce sales, especially in India and China, is pushing up the requirement for greater efficiency in warehouses and fulfillment centers. 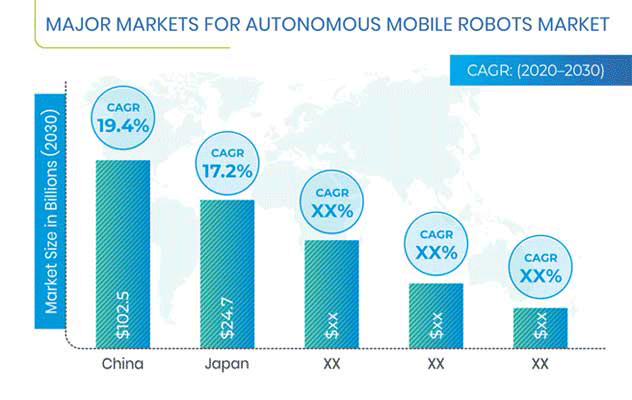 The service category had the largest autonomous mobile robots industry share in 2019, under the offering segment. This category includes the revenue generated from the sale of various aftermarket parts and components, consulting services, and the deployment/integration of these robots. Organizations such as Fetch Robotics Inc., OMRON Corporation, and KUKA AG are offering the robot-as-a-service (RaaS) ownership model. This subscription model leads to a huge reduction in the total cost of ownership (TCO) of these robots, which is why it is becoming popular, predominantly in the manufacturing and logistics sectors.

The unmanned maritime vehicle (UMV) category is predicted to demonstrate the fastest growth in the future, under the robotic system classification of the offering segment. This is ascribed to the surging usage of UMVs for commercial and defense applications. Autonomous mobile robots market players, such as Lockheed Martin Corporation, L3 ASV, and General Dynamics Corporation are building-military grade UMVs. Additionally, due to the rapid advancements being made in the acoustic sensor technology, the efficiency for underwater navigation and mapping is increasing sharply. 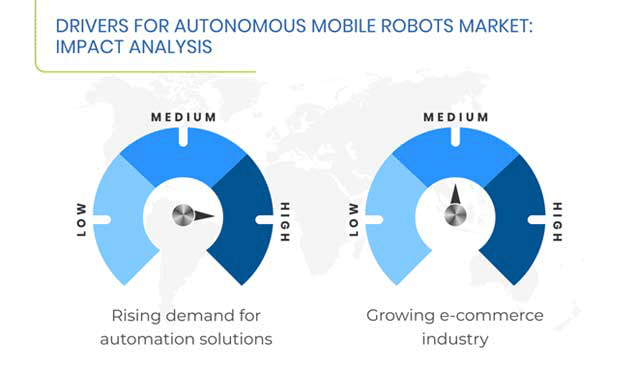 Asia-Pacific (APAC) dominated the industry historically, primarily because of the high sales of these robots in South Korea, Japan, and China. Moreover, the market is predicted to demonstrate the fastest growth in this region in the forthcoming years. This is ascribed to the expansion of the e-commerce industry and the subsequent surge in the requirement for a streamlined supply chain. These robots are increasingly being used in warehouses for simplifying product delivery and storage processes.

Europe was the second-largest autonomous mobile robots market during the last few years. In this region, Germany generated the highest market revenue in 2019, and the industry is predicted to exhibit rapid advance in the country in the future years. This is ascribed to the high economic and social stability of Germany. As per World Bank, Germany recorded a gross domestic product (GDP) growth of nearly 1.5% in 2018. This indicates that the country had stable economic conditions for customers and retailers.