The global automotive sunroof market values stood at $6.43 billion in 2021, which is predicted to rise to $14.19 billion by 2030, growing at a CAGR of 9.2% between 2021 and 2030. The growth is ascribed to the rise in automotive manufacturing, increase in per capita income, and growth in the pace of the technological advancements in sunroof systems.

Moreover, the increasing sales of passenger vehicles and rising consumer expenditure on brighter vehicle interiors and better ventilation, to improve the driving experience, are expected to fuel the demand for automotive sunroofs. These components are becoming more popular as customer preferences move toward a better driving experience. Another important factor that helps in the market growth is the increasing tendency among manufacturers to provide these components as an optional feature in the majority of the passenger cars.

The demand for such auto parts is also projected to be driven by the technological developments in their materials and designs, to improve safety, performance, and aesthetics and reduce the failure rate. This is due to the center of gravity being altered when certain heavy glasses are installed in a car's sunroof system, which compromises the vehicle stability and structural integrity. In order to minimize weight and ensure stability, continual design improvements and material developments are being brought about. 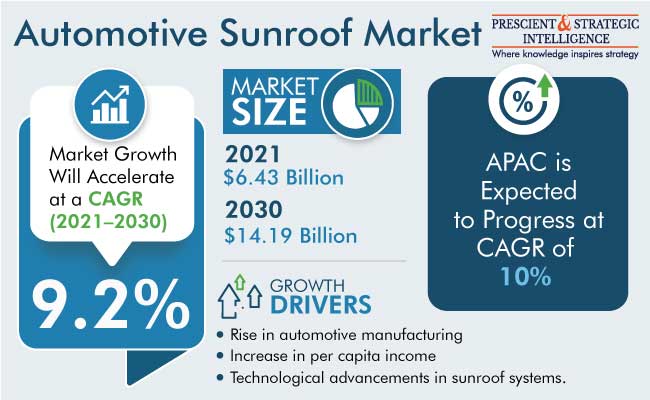 Glass variants held a major share in the sales value in 2021, and they will maintain their dominance over the coming years. This may be attributable to technological improvements, which have enabled the production of numerous types of glassware, such as tempered glass, laminated glass, and glass that can protect against UV radiation. Unlike fabric sunroofs, which are frequently seen on convertibles, those made of glass allow users to better regulate natural light and enjoy natural ventilation, rather than depending solely on the car's AC. 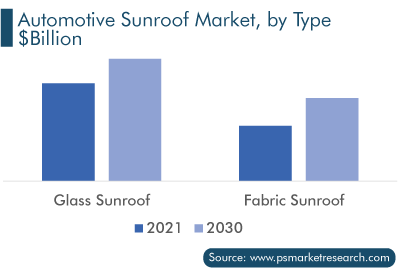 Premium and luxury Cars with Sunroofs Gaining Popularity among Consumers

Premium and luxury cars held a significant market share in 2021, owing to the increasing spending power of the consumers in emerging economies, as well as in developed countries, such as the U.S., the U.K. Germany, Italy, France, and Spain. The early adoption of sunroofs in advanced economies is largely credited to luxury automobile OEMs’ emphasis on enhancing the whole travel experience and comfort of the vehicle.

Moreover, class E and class F automobiles, which include mid-size and full-size luxury sedans, have the highest number of premium models across OEMs. These cars often come with a wide selection of luxurious and comfort-inducing amenities, including sunroofs, which improve the customer's entire travel experience. In this regard, the early adoption of sunroofs by numerous upscale automobile manufacturers worldwide has greatly helped in driving the market growth.

The Asia-Pacific region accounted for the largest market share in 2021, and it is projected to grow at a CAGR of more than 10% over the next few years. This growth is attributed to the rising demand for premium vehicles, coupled with the increasing disposable income of the consumers in emerging economies, such as China and India. Additionally, the growing investment by automotive manufacturers to optimize their production capacity across the region is driving the market growth.

Furthermore, the presence of major automotive OEMs, such as Suzuki, Hyundai-Kia, Mitsubishi, Toyota, Lexus, and Tata Motors; growing preferences for vehicle personalization, and rising demand for post-sale sunroof installation from the younger population are some other factors propelling the growth of the market.

Additionally, governments in the Asia-Pacific region are launching programs to advance the automobile industry, which will help in the growth of the related markets. The rising demand for mass-segment automobiles, with sunroofs as an optional feature, and the government attempts to promote the use of electric vehicles are to credit for the growing demand for these auto parts. For instance, the Indian government has announced a number of subsidies for EVs, to encourage manufacturers to increase their output over the forecast period.

Furthermore, Europe was the second-largest market for automotive sunroofs in 2021, and it is expected to grow at a substantial CAGR in the coming years. This is majorly due to the growing popularity of premium vehicles and strong tendency of OEMs to integrate extra features to improve comfort and the driving experience. Moreover, the region serves as a hub for major luxury automakers, especially Germany, which is home to Volkswagen, BMW, Audi, and Daimler. 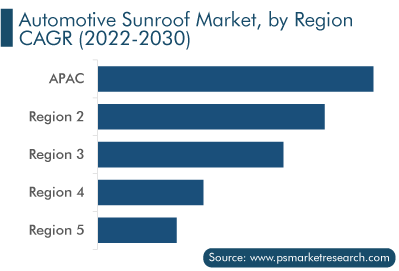 Sport utility vehicles are one of the most-popular car classes because of their high variation in range, power output, and amenities and high adaptability on rough terrain. In the coming years, SUVs are expected to see significant acceptance, particularly in emerging economies, such as China and India. As a result of these considerations, automakers, such as Ford, Chevrolet, Kia, and Toyota, have been pushed to adopt sunroofs in their vehicles. Furthermore, Audi Q3, Q7, and BMW X3, X5, and X6 are among the new, popular SUV models equipped with panoramic sunroofs.

Manufacturers of sunroof glass are combining numerous features with technical improvements to create tempered glass, laminated glass, and green glass, which may protect against UV radiation. These components also improve the air circulation in automobiles, while those with the glazing technology reduce noise and increase thermal comfort.

In addition, Audi has collaborated with Alta Devices to build panoramic glass roofs combined with solar cells for key Audi models. The electricity generated by the solar cells may be utilized to power the car's electrical equipment, such as seat warmers and air conditioning systems. As a result, the energy/fuel efficiency improves, which enhances the driving range of a pure-electric, HEV, or PHEV. As a result, OEMs’ eagerness to engage in R&D, along with the attractive government financing, has spurred the progress of the solar roof technology, which is likely to boost the market growth in the future.

Frequently Asked Questions About This Report
What is the leading application in the automotive sunroof market?+

Premium and luxury cars are the largest application in the market for automotive sunroofs.

What are the upcoming trends in the automotive sunroof industry?+

Sunroofs integrated with solar panels are a key future trend in the automotive sunroof industry.

What is the predicted growth rate for the automotive sunroof market from 2021 to 2030?+

What was the value of the global automotive sunroof industry in 2021?+

What are the regional insights of the automotive sunroof market?+

APAC is the largest market for automotive sunroofs, led by the rising auto sales in China and India.