The market is witnessing healthy growth on account of the burgeoning automotive industry. Moreover, recent advancements, such as interactive safety systems, self-driving cars, and automobile connectivity, are expected to change the global scenario of the automotive industry over the forecast period.

Automakers are also actively engrossed in the integration of various mechanical technologies, such as automatic transmissions, gasoline turbochargers, gasoline direct injection, and power steering. With the rapidly changing dynamics of the automotive industry, these technologies are expected to positively impact the fuel transfer pump demand. The growing purchasing power, which is encouraging people to buy automobiles, would further propel the demand for this component in the near future.

Furthermore, component sales in the APAC region are primarily influenced by the renting and reselling of automobiles. Moreover, countries such as Brazil and Mexico are expected to contribute significantly to the LATAM automotive industry. In the same way, the mining and industrial sectors are forecast to boost the sales of light and heavy commercial vehicles in the MEA region, thus propelling fuel transfer pump sales. 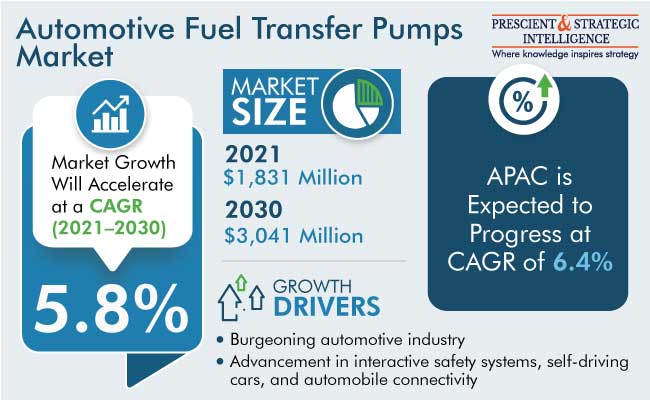 Additionally, the presence of numerous automobile giants in European countries, such as Germany, France, and Italy, and the growing hybrid passenger vehicle preference are projected to augment the growth in component sales in this region.

As a result, auto parts companies are actively strengthening their supply chains, particularly in North America and APAC. Suppliers are catering to the specific requirements of automakers by focusing on developing high-quality automotive pumps that adhere to the prevalent emission and efficiency regulations. Most of the suppliers have long-term contracts with OEMs for such components, in order to ensure a steady inflow of revenue and stay relevant amidst the intense competition.

Electric-technology-based pumps dominated the market in 2021, because of their better performance and higher efficiency compared to mechanical pumps.

Moreover, electric pumps offer various benefits, such as enhanced pressure regulation, a lower risk of wear and tear, and high durability. These devices are proficient in operating at pressures between 30 and 40 pounds per square inch. Automobiles featuring advanced injection systems use such pumps as these components are quite safe and supply fuel to the engine efficiently, with a low power loss. Electric vacuum fuel transfer pumps also help in the reduction of carbon dioxide emissions from engines.

Therefore, the adoption of electricity-based injecting machines is comparatively high, resulting in an increment in the automobile price. With the growing awareness about the benefits, consumers are demanding automobiles equipped with electric pumps for gasoline transfer. Hence, the majority of the vehicles nowadays are equipped with this component, and this trend is likely to continue over the forecast period.

Moreover, gasoline direct injection is an innovative technology that is progressively replacing the gasoline port injection technology due to the steep rise in the adoption of novel technologies by automotive manufacturers to comply with the stringent emission norms across the globe and achieve the desired fuel economy.

This is primarily on account of the improved combustion and mechanical efficiency offered by this technology, which lead to an improved automotive performance and lower vehicular emissions. Manufacturing giants offering gasoline direct-injection engines include General Motors, Hyundai Motor Company, Ford Motor Company, BMW AG, and Volkswagen of America Inc.

On parallel lines, automakers are launching commercial vehicles with diesel direct-injection systems, owing to their high efficiency and superior performance. 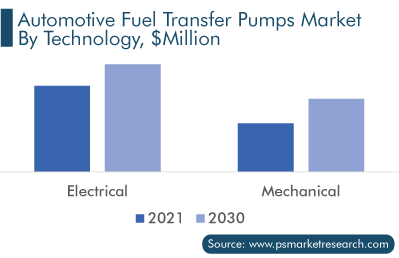 The market for automobile fuel transfer pumps was dominated by Asia-Pacific and is expected to register the highest CAGR, of more than 6.4%, in the forecast period. The expansion of the automotive sector in China has drawn the attention of various international automakers. Home to the largest auto sector in the world, the country continues to witness a boom in the integration of components that transfer fuel from the tank to the engine. Moreover, the country's rapid embrace of hybrid vehicles has created a rise in car sales, which offers an appealing potential to auto component makers in China.

The encouragement given to the production of hybrid vehicles has also made a significant contribution to the growth in the integration of such pumps. The Ministry of Industry and Information Technology of China has issued regulations that allow automakers to manufacture more petrol–electric hybrids and fewer all-electric automobiles, which are more expensive, between 2021 and 2023. In an effort to boost the usage of such automobiles, while lowering pollution, the government also provides tax exemptions on their purchase.

Additionally, it is predicted that the demand for fuel transfer pumps in the Middle East and Africa region will expand at a high rate over the next few years. The increasing expenditure on technological advancements and the soaring demand for passenger cars and light commercial vehicles are contributing to the rapid expansion of the domain in this region. Middle Eastern governments also have created policies to encourage financial investments in the auto sector.

Moreover, in 2021, Europe was the second-largest buyer of such components. This was due to the presence of giant automakers in Europe, which is also expected to have a positive effect on the industry during the projection period. This would be, in part, due to a surge in the demand for green vehicles, such as conventional hybrids and PHEVs, in Germany, France, and Italy. 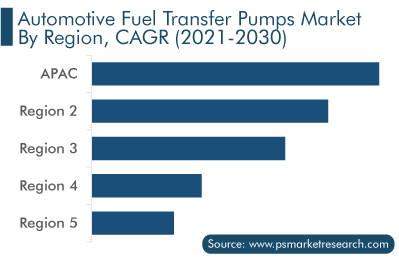 A plug-in hybrid vehicle is an electric automobile that combines an internal-combustion-engine-powered generator with an external power source, to replenish the battery. The passenger car sector is seeing a strong penetration of PHEV variants of motorcycles, mopeds, vans, cars, and commercial automobiles, such as utility trucks, buses, and trains. PHEVs combine the advantages of internal combustion engines and electric motors. As they have a typical IC engine, wherein the pump is utilized to transport fuel from the tank, which is then injected into the carburetor or fuel injector, the rise in the preference for such vehicle types is set to present a lucrative potential for the growth of the fuel transfer pumps market.

Based on Pump Type

Frequently Asked Questions About This Report
What is the growth potential for the automotive fuel transfer pumps market?+

The market for automotive fuel transfer pumps has been forecast to witness a CAGR of 5.8% during 2021–2030.

Which is the more-popular technology in the automotive fuel transfer pumps industry?+

Most end users in the automotive fuel transfer pumps industry prefer electric pumps to mechanical ones.

The greatest opportunities of growth for the market for automotive fuel transfer pumps are available in APAC and the MEA.

Emission norms are a key driver for the automotive fuel transfer pumps industry because this component is specifically designed to reduce the consumption of fuel and lower GHG emissions.

Players in the market for automotive fuel transfer pumps have made the most money by selling pumps for passenger cars.