The global automotive catalytic converter market size was $14,233.0 million in 2021, and it is expected to reach $28,342.9 million revenue by 2030, advancing at a CAGR of 8.0% during 2021–2030. This can be attributed to the strict emission regulations for automobiles and growing vehicle production and sales. 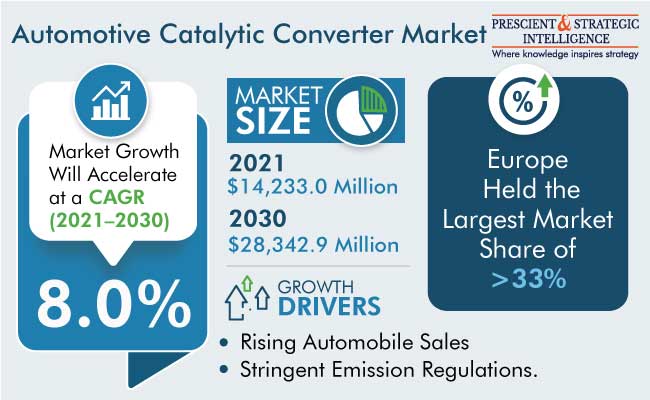 The European region accounted for the largest revenue share, of around 33%, in 2021, and this trend is expected to continue during the forecast period. This will be due to the large number of automobile manufacturers and high adoption of catalytic converters in the region. Additionally, the market size is being stimulated by the expanding demand for high-end vehicles, increasing count of auto parts production facilities, and high capital investment and R&D spending in the automotive industry by market giants. Furthermore,

APAC will register the fastest growth in the market during the forecast period. This can be ascribed to the increasing usage of passenger vehicles, as the region has a high number of daily commuters and a high production capacity. In addition, the rising disposable income and improving lifestyles are responsible for the significant market growth in the region. Furthermore,

North America also holds a significant revenue share in the global market, owing to the rising awareness regarding the effects of automotive emissions, stringent government regulations, and innovations in catalytic converters. In addition, the U.S. is the key contributor to the regional market revenue due to the increasing environmental consciousness among consumers and rising strictness of the regulations surrounding vehicle emissions.

The governments of numerous countries have implemented strict regulations to limit hazardous emissions from vehicles due to the combustion of petroleum-based fuels. For instance, in December 2021, the EPA published updated national greenhouse gas emission regulations for light trucks and passenger automobiles for Model Years 2023–2026. Similarly, the Stage V standards were implemented by the EU Parliament in July 2016, which were released in the Official Journal of the EU as Regulation (EU) 2016/1628 in September. The Stage V standards tighten the regulations on non-road engines and machinery and set stringent limits on particle emissions.

In addition, Euro VI, the sixth and the most-recent regulations implemented by the EU, aims to lower the level of hazardous emissions emitted by new automobiles. These strict regulations regarding vehicles emission control are expected to drive the automotive catalytic converter market demand.

Three-way oxidation–reduction catalytic converters contributed the highest revenue in 2021, and they are expected to maintain the same trend during the forecast period. This will be due to the usage of these converters in an increasing number of ICE vehicles. Primarily, their greater effectiveness and reactive action toward hydrocarbon emissions, nitrogen oxides, and carbon monoxide are responsible for the market growth in the category.

Furthermore, diesel oxidation catalyst converters generate significant revenue in the market, and their sales will witness a substantial CAGR during 2021–2030. This can be ascribed to the wide usage of these converters in on-road and off-road diesel vehicles, including agricultural machinery and construction equipment. In this regard, the growing necessity for goods transportation will drive the overall market by propelling the sale of diesel trucks and other logistical vehicles. 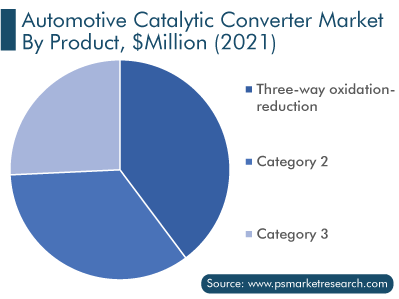 Rhodium-based catalytic converters are the highest revenue generators, and their sales will rise with the highest automotive catalytic converter market growth rate, of over 8%, during the forecast period. This will be because the metal is more cost-effective than platinum and has a better ability to reduce the emission of hazardous gases.

Moreover, palladium-based catalytic converters are more likely to be preferred by consumers for gasoline catalytic converters than platinum-based variants, as they are cost-effective. Additionally, their durability and reactivity at high temperatures, which allow them to deliver better oxidation, make them popular. 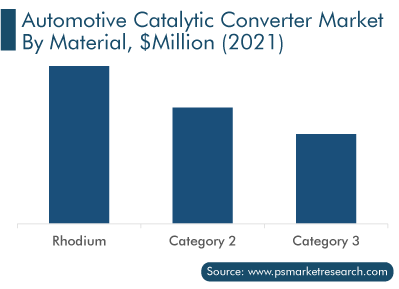 Strategic Developments by Market Players to Gain a Competitive Edge

Frequently Asked Questions About This Report
How much is the automotive catalytic converter market worth?+

The market for automotive catalytic converters generated $14,233.0 million in 2021.

What are the key drivers for the automotive catalytic converter industry?+

The automotive catalytic converter industry is driven by the rising automobile sales and stringent emission regulations.

Which is the leading product in the automotive catalytic converter market?+

The market for automotive catalytic converters is led by three-way oxidation–reduction variants.

Europe is the largest region in the automotive catalytic converter industry.

What is the most-effective automotive catalytic converter market strategic development?+

Product launches are the most significant in the market for automotive catalytic converters.