The global automotive air suspension market size was $6,262.00 million in 2021, and it will grow at a CAGR of 6.25% during 2021–2030, to reach $10,805.66 million by 2030. This is ascribed to the increasing demand of commercial vehicles along with the vehicle comfort and safety which eventually derive the demand for the air suspension system in heavy vehicles specially. 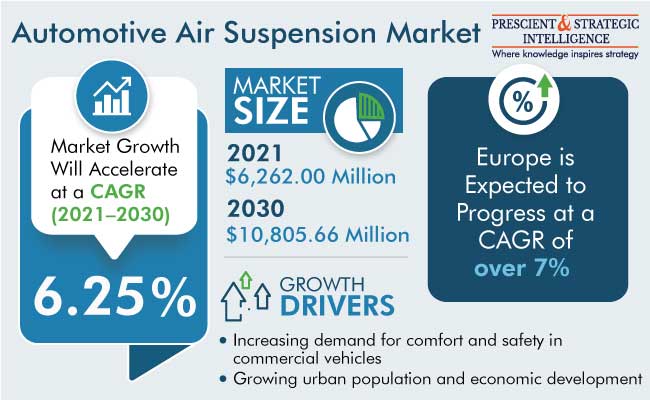 The passenger cars category garnered the largest market share of more than 50% in 2021. This is accounted to the demand for the greater driver comfort, less wear and tear on the suspension system which can eventually reduce the harshness and vibration of heavy-duty driving causing less discomfort and fatigue.

Passenger cars with air suspensions have a greater transport capacity because these components improve the grip and level the suspension as a whole. The feel of an air suspension system may also be changed, giving drivers the option of a softer ride for cruising down the highway or a rougher ride for better handling on winding, challenging roads.

There are various benefits associated with the air suspension system. There are growing demand from the countries like China, India for the Sales of opulent automobiles are being boosted by the rising demand for cars with comfort features. It saw a substantial increase in vehicle sales in Asia Pacific, according to luxury automakers Mercedes-Benz, Audi, Lamborghini, BMW, MINI, and Rolls-Royce.

The sale of luxury vehicles in the area is being driven by rising disposable income levels in China and India. Luxury carmakers like Mercedes-Benz, Audi, BMW have observed significant increase in vehicles sales. This is driven by the growing awareness and enhanced demand comforts, vehicle safety against vibrations and better control over the vehicles.

The growing urban population and economic development of developing countries are driving up the demand for safe and convenient rapid transit options. Initiatives are being taken by several governmental and non-governmental organizations to enhance the transit system user experience. Passenger cars offer a comfortable and safe ride, which improves client satisfaction and contributes to swift, pleasant transportation, thus encouraging manufacturers to install air suspension systems in their premium models.

Electronically Controlled will be Fastest during the forecast

Electronically controlled air suspension will expect to witness the fastest CAGR of around 7% during the forecast period. In order to give height references for all four corners of the vehicle, the electronically controlled air suspension additionally has height sensors that are based on measuring resistance in contact with the terrain. Further developments are starting to include Electronic Control Units (ECUs) that can fit beneath the floorboard of the car, expanding the use of air suspension in regular driving.

Moreover, the improvement of the comfort and safety of the passengers of the vehicle has been the primary goal of technological breakthroughs in the global automotive air suspension market growth. The ride comfort and handling capabilities of the car are increased with an upgraded suspension system.

Sports suspensions occasionally include an air suspension system as well, however air suspension is typically employed to provide a smooth and consistent driving quality. Similarly, in heavier vehicle applications, such as trucks, tractor-trailers, passenger buses, and even passenger trains, air suspension takes the place of a traditional steel spring suspension.

Non-Electronically controlled is largest used in market. This is the majorly due to the cost-effective than electronically air suspension and this can make loading and unloading simpler when entering and leaving the vehicle. This is very helpful when transporting passengers, disabled individuals, or animals. 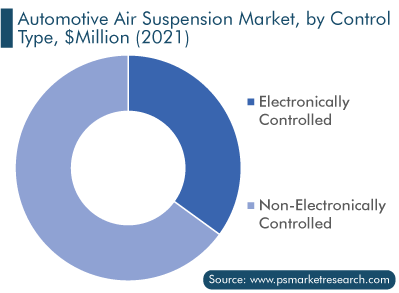 The Asia-Pacific region dominates the market in 2021. After the pandemic the region is growing majorly due to the resumption of the offices which eventually increase the demand. The customers are preferring towards the premium vehicle which includes superior components so as to get the high-quality rides from their cars, which has led OEMs to include air suspension systems more frequently in their designs. Demand for air suspension systems is only seen in the high-end passenger car market and in trucks and buses in the commercial vehicle category.

The majority of car ownership in this region is concentrated in China, India, Japan, and South Korea, which has an impact on the market. Due to its vast population and post-pandemic increase in demand for passenger cars, China is predicted to continue to be the region's largest market.

Production has nearly returned to pre-pandemic levels in the nation. India is anticipated to experience the fastest rate of growth in terms of value due to the rise in demand for passenger cars as the nation's economy recovers from the pandemic's effects.

Moreover, the focus on the technological advancements in automotive sector will propel the market growth due to the rising adoption of advanced technology systems. The manufacturers are focusing to make necessary modifications in the struts or shocks in order to have a smooth ride. For instance, there are various car models like Mercedes C-Class, Audi A6 All road, Volvo XC60 models have the air suspension which can make long journeys relaxing and comfortable. 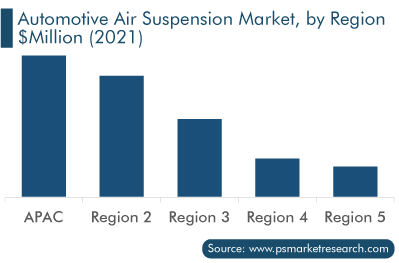 The regulatory environment for the automotive sector is getting stricter and stricter. OEMs are required to produce cars with higher levels of driver safety and lower pollution levels. It necessitates the creation of lightweight suspension systems. Manufacturing and R&D costs for manufacturers are increased as a result.

Furthermore, consumers are getting more aware about vehicle safety and various countries are taking initiatives for the vehicle safety. India has announced standards and programs to regulate the safety of the driver.

Geographically, Europe is expected to have the fastest growth in the global automotive air suspension market during the forecast period. This is attributed to the surging demand for comfortable public transit, which is likely to augment the market growth over the forecast period. Germany and France are the two major manufacturing hubs for the automotive giants in Europe.

North America will also witness around 6% growth during the forecast period. The U.S. will hold the major share, followed by Canada. Major automotive OEMS are based in the nation, which additionally benefits from a substantial infrastructure support and the government's support for electric vehicles. In addition to these, the increasing propensity of young people for luxury and premium vehicles is predicted to present lucrative opportunities. This will further bolster the market towards the market.

Based on Vehicle type

Frequently Asked Questions About This Report
What is the current size of the automotive air suspension market?+

The market for automotive air suspensions valued $6,262 million in 2021.

What is the growth rate of the automotive air suspension industry?+

The automotive air suspension industry will have a CAGR of 6.25% till 2030.

What is the key opportunity in the automotive air suspension market?+

The rising demand for luxury cars offers opportunities to the market for automotive air suspensions.

Which is the most-lucrative technology for automotive air suspension industry players?+

The electronic technology is highly lucrative in the automotive air suspension industry.

Which is the largest country in the APAC automotive air suspension market?+