The Asian charcoal briquettes market stood at $952.5 million in 2019, and the market size is expected to showcase a CAGR of 6.2% during the forecast period (2020–2024). The increasing popularity of barbecued food and growing steel and cement industries, where heat is of high importance, are some of the key factors behind the expansion of the charcoal briquettes industry in the region.

Further, due to the complete lockdown throughout several countries, the hospitality sector has been shut down to a large extent, in order to avoid unnecessary gatherings, which may increase the risk of the spread of the coronavirus disease. This has severely affected the consumption of barbecued food in this region, which requires charcoal briquettes for grilling. 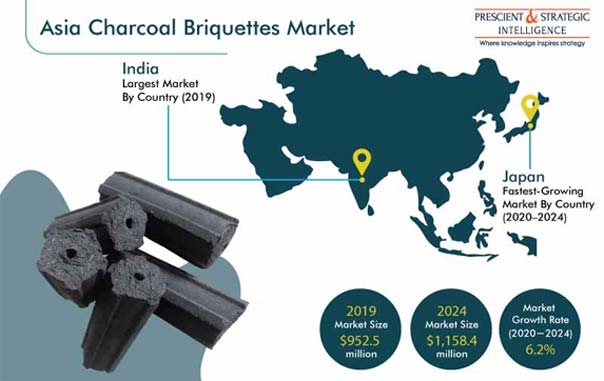 The hexagonal category accounted for the largest share in the Asian charcoal briquettes market in 2019, based on type. This is mainly ascribed to its preference among restaurants and hotels for the preparation of barbecued food. The hexagonal shape provides uniform heating during grilling, thus resulting in tasty food. Further, the easy conversion of non-uniformly shaped charcoal to the hexagonal shape, which results in its higher availability, is also propelling its demand.

Based on application, the use of charcoal briquettes in industrial applications is projected to showcase the fastest growth during the forecast period. Industries are preferring charcoal, in place of coal, in order to contribute in the mitigation of global warming, as their burning does not lead to any smoky emission. Further, in several countries, governments are imposing stringent regulations to protect the environment, which, in turn, has added to the demand for non-smoky fuels, including charcoal.

Moreover, charcoal briquettes are utilized in silicon manufacturing, which is increasing in the region because of the growing use of aluminum–silicon alloys in the automotive sector. This, in turn, is contributing to the growth of the charcoal briquettes market in Asia.

India held the largest market share, in terms of volume, in the Asian charcoal briquettes market in 2019. As per theFood and Agriculture Organization of the United Nations(FAO), India produced 2,880.0 thousand tons of charcoal in 2018, which was the highest in Asia. In India, the presence of a large number of charcoal manufacturers and high-volume consumption of charcoal for food preparation in rural areas and in the metallurgical industry, for various heat-intensive processes, drive the growth of the market. Further, the changing consumer food preferences are also propelling the demand for charcoal briquettes in the county.

The most prominent trend being observed in the charcoal briquettes market of Asia is the increasing demand for barbecued food. Barbecue is a food tradition deeply rooted in the history of developed economies, such as the U.S. and Germany. However, in recent years, the barbecue culture has extended beyond these developed nations, to all parts of the world, especially Asian countries. With the growing interest of people in barbecued meals, the demand for barbecue fuel and accessories is on the rise.

Charcoal briquettes are increasingly being utilized as a fuel for barbecue applications, with the barbecues themselves being preferred over gas grills, as they not only provide a caramelized exterior to the food, but also lend a smoky flavor to it. Hence, the growing consumer inclination toward barbecued food is resulting in the increasing consumption of charcoal briquettes in the Asian region.

Increasing Use of Charcoal Briquettes in Recreational Cooking

The use of charcoal briquettes in cooking is significantly increasing across Asian countries. Asia has a diverse culture, with every country having its signature cooking styles and cuisines. However, the increasing awareness on a healthy lifestyle and changing food preferences of people can be seen in every country. As a result, the consumption of food that is grilled or barbecued is increasing in the region, which, in turn, is providing impetus to the demand for charcoal briquettes as cooking fuel.

Grilled food is gaining popularity among people across the region, owing to the various health benefits associated with it, especially low fat content, as the excess oil drips off the grates during the cooking process. Moreover, grilled food retains much of its nutritional value, as the process locks in more moisture and consumes less oil or butter. Owing to such benefits, the demand for grilled food is expected to surge in the foreseeable future, which, in turn, would result in an increase in the demand for charcoal briquettes.

Charcoal briquettes are a cost-effective raw material, which is why they work well as a substitute for traditional fuels. In addition to this attribute, charcoal briquettes have a low production cost, and they are also considered a clean and renewable source of energy.

Companies are using various strategic initiatives to increase their revenue. For instance:

Some Key Players in Asian Charcoal Briquettes Market Are: