The global armored vehicles market size was $22.5 billion in 2021, and this number is expected to increase to $35.2 billion by 2030, advancing at a CAGR of 5.1% during the forecast period. This can be attributed to the militarization of law enforcement agencies, rise in the frequency of cross-border disputes, growth in the demand for compact, robust, and highly efficient armored vehicles, and surge in the defense budgets of several nations. Moreover, the high R&D spending by industry giants and government collaborations with private organizations to develop highly innovative and precise solutions for defense support the market growth. 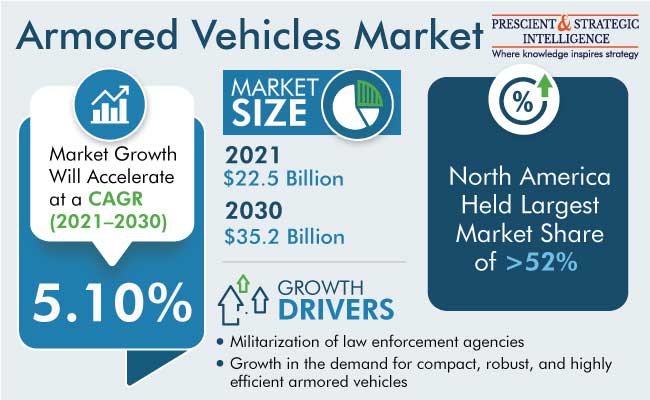 Unmanned armored ground vehicles will register the fastest growth during this decade, This can be ascribed to the growing demand for them owing to their essential function in supporting terrestrial combat and assisting logistics operations onshore, as they can operate in a range of high-risk situations. Moreover, numerous industry giants are investing heavily in R&D to develop indigenous technologies for armored UGVs.

Combat vehicles accounted for the highest revenue contribution in 2021, and they are expected to maintain their position during the projection period. This is due to the mounting demand for armored personnel carriers (APCs) and light protected vehicles (LPVs) across the globe. Moreover, the burgeoning defense budgets and growing need for these platforms, especially in Asian countries, fuel the market growth.

The global military spending experienced an increase of 6.7% in 2020–2021 from 3.1% in 2019–2020. The primary causes of this rise in spending are the conflicts between different nations, the internal and external security threats, rising terrorism, numerous border security issues, and various technological developments in the field of defense.

The U.S., the world’s leading power, is increasing its defense spending, having spent around 3.7% of its GDP on the military in 2020. The increasing military spending gives the armed forces more freedom to buy new armored automobiles and strengthen their land-based capabilities.

Wheeled armored vehicles accounted for the larger revenue share in 2021 and will register the faster growth in the coming years. Such automobiles are gaining popularity due to their low weight, better mobility, and improved combat capabilities. Additionally, the rising incidence of terrorist and hostile attacks in urban areas creates a strong need for armored cars and other wheeled vehicles. 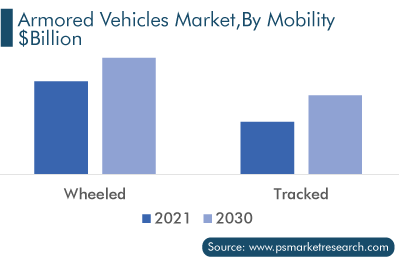 Defense forces must prioritize better monitoring of maritime and land borders, due to the rising number of terrorist attacks worldwide, particularly those that target border areas. The reaction time between the identification of threats and their interception is often very high, making it challenging for the armed forces to deal with the situation successfully and quickly in some circumstances. Since robots can conduct enhanced cross-border surveillance and intelligence gathering with a quicker reaction and greater precision, they can serve as the ideal human substitute in certain situations. Such robots can efficiently and successfully patrol national boundaries and continuously transmit up-to-the-second information to ground stations. Such vehicles are being provided with armor for enhanced durability.

Moreover, as they are deployed by defense forces of many nations to carry out target acquisition and surveillance activities, such robots are increasing in demand all over the world, which propels the overall armored vehicles market expansion.

The defense category accounted for the larger share of the revenue in 2021, and it is further expected to maintain its dominance during the forecast period. This can be attributed to the mounting usage of armored personnel carriers (APCs), infantry fighting vehicles (IFVs), LPVs, MBTs, mine-resistant ambush-protected (MRAP), and tactical vehicles for different purposes, growing need to protect armed forces personnel from mine explosions, and the strong focus on safer deployment of infantrymen to battlegrounds or high-risk areas.

Moreover, the burgeoning terrorism and cross-border criminal activities have triggered asymmetric warfare between nations, which is expected to further propel the demand for such defense-grade automobiles.

North America accounted for the largest revenue share, of more than 52%, in 2021, and it is further expected to maintain its dominance during the forecast period. This can be attributed to the presence of a large number of military machinery and equipment manufacturers, high adoption rate of advanced technology, and ongoing programs under which the U.S. government is collaborating with industry players to develop advanced vehicles for defense purposes.

APAC will register the fastest growth during this decade, at a CAGR of around 5.4%. This can be ascribed to the increasing need for armored vehicles owing to the rising terrorism and cross-border issues, complex geopolitics, growing demand for the modernization of the military, and rising number of industry players. In addition, the growing military spending and increasing demand for medium-sized LPVs for patrolling operations are expected to boost the market growth in the region over the forecast period. Furthermore,

Europe too held a significant revenue share in 2021 due to the increasing frequency of border conflicts among neighboring countries, for instance, the Russia–Ukraine War. Moreover, considering the burgeoning terrorism activities, several governments in the EU are increasingly aiming at procuring vehicles for battle and personnel transportation, for strengthening their defense capabilities. 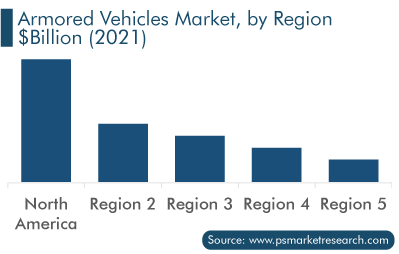 Frequently Asked Questions About This Report
What are the growth prospects for the armored vehicles market?+

How much is the armored vehicles industry worth?+

Which is the leading mobility category in the armored vehicles market?+

The market for armored vehicles is dominated by the tracked category.

Who are the potential customers for armored vehicles industry players?+

Which region is the most lucrative for the armored vehicles market growth?+

APAC, led by Japan, India, China, and South Korea, is the most lucrative in the market for armored vehicles.