The AI in genomics market was valued at an estimated $519.0 million in 2021, and it is expected to advance at a CAGR of 49.7% during 2021-2030. The major factors leading to the market advance include the increasing size of genomics research data sets, emergence of startups in the field, and extensive research and development (R&D) activities. Genomics research is expected to generate an astonishing amount of data, of 2 to 40 exabytes, in the next 10 years. The increasing size and complexity of DNA sequencing and other biomedical data sets have resulted in the need for AI computational tools to analyze it, to discover genetic diseases in patients. This helps in providing precision medicine treatment to them. 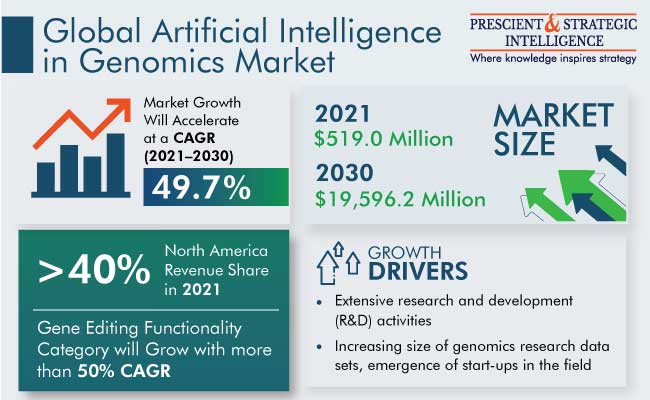 However, whole-genome sequencing, the advanced genetic test that allows for the study of the entire human DNA, is quite expensive, costing $500–$1,000. Thus, getting tested is not economically feasible for all income groups. As a result, Illumina Inc. is targeting to reduce the test cost to $100, by incorporating advanced AI. With the lower testing cost, 50–60 million people are expected to get DNA sequencing done every year.

As of now, traditional gene panel analysis takes around two weeks; however, researchers from Stanford University, University of California, Baylor College of Medicine, Google, Oxford Nanopore Technologies, and NVIDIA have developed a method to perform DNA sequencing in 5 hours 2 minutes, using AI for the end-to-end process. This would help clinicians identify genetic clues and inform patient care plans early, as it optimizes the diagnosis pipeline in 7–10 hours.

The COVID-19 pandemic boosted the overall AI industry; however, sectors linked closely to COVID-19 saw a strong increase in investments, with a year-on-year growth of 44% during 2020 compared to the 12% year-on-year growth in 2019. Thus, the R&D investments in and the adoption of AI in genomics also augmented. AI had been used to identify the sequence of SARS-COV-2 initially, as well as of its Delta and Omicron variants.

The cloud-based AI in genomics market is projected to witness the faster growth compared to the on-premises market. The major reason behind this growth is the ability of cloud-based solutions offer to access, analyze, and store data and compile all of it in a single location. Moreover, on-premises solutions are becoming unfeasible with the increasing size of genomics databases. The size of the raw data generated from a single human sequence is approximately 200 Gigabytes, and the increasing awareness about genome sequencing would result in a surge in the number of human genome sequencing studies conducted during the forecast period. This would make on-premises AI solutions even more difficult to work with, thus boosting the demand for their cloud deployment.

Gene Editing Functionality To Be Fastest Growing during Forecast Period

For the treatment of most genetic diseases, gene correction is required, rather than disruption. The technology developed so far for the same is clustered regularly interspaced short palindromic repeats (CRISPR), which slices DNA to treat diseases. Its systemic delivery in a human body was first demonstrated in a clinical trial in June 2021. Thus, gene editing is projected to witness the highest CAGR, over 50%, over the forecast period.

AI in Genomics Is Most Widely Used for Translational Precision Medicine 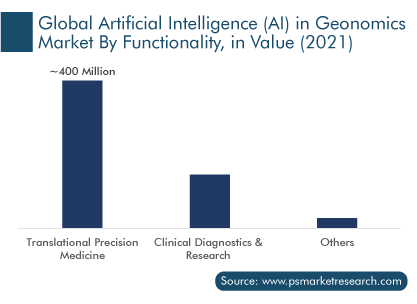 Pharma and Biotech Companies Are Generating Largest Proportion of Revenue

Pharma and biotechnology companies generate the highest revenue for the artificial intelligence in genomics market, and this category is expected to maintain its position during the forecast period. Companies are using AI for improving decision making and the efficiency of research and clinical trials, along with optimizing innovation and creating new tools for regulators, physicians, insurers, and consumers. According to a study conducted in 2021, 62% of the healthcare organizations were thinking of investing in AI, and 72% of the companies believe AI would be crucial to how they do business in the future. Additionally, 50% of the organizations plan to implement AI strategies and adopt them by 2025.

North America dominates the AI in genomics market, with more than 40% market share in 2021, due to the heavy research funding received by biotech and IT companies from governments and private equity entities in the region. For instance, in March 2022, the CDC announced a new competitive cooperative agreement that would provide funding to establish the Pathogen Genomics Centers of Excellence (PGCoE) network in the U.S. Additionally, in April 2021, the U.S. government announced an investment of $1.7 billion for future genomic sequencing needs, with a focus on detecting, monitoring, and mitigating SARS-CoV-2 variants. 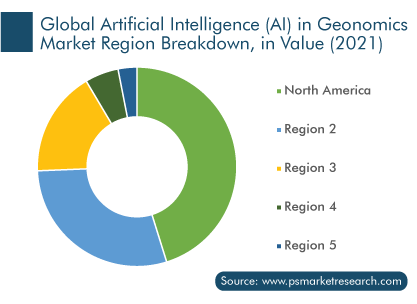 In recent years, major players in the AI in genomics market have actively collaborated for R&D on new platforms, to analyze varied types of datasets for identifying rare genetic diseases. For instance:

Key Players in AI in Genomics Market Are:

Based on Delivery Mode

Frequently Asked Questions About This Report
What is the forecast for the AI in genomics market in 2030?+

What is the key application in the AI in genomics industry?+

Translational precision medicine is the higher-revenue-generating application in the AI in genomics industry.

How did COVID-19 impact the AI in genomics market?+

The COVID-19 impact on the market for AI in genomics was positive.

Which region holds the largest AI in genomics industry share?+

The largest region in the AI in genomics industry is North America.

Which is the most-significant development in the AI in genomics market?+

The key development in the market for AI in genomics is the receipt of heavy funding by companies engaging in genomics research using AI.