Asia-Pacific (APAC) is expected to witness the fastest growth in the industry, during the forecast period. This can be mainly attributed to the rising income level, increasing spending power of the people in countries such as India, China, and Indonesia, and the surging demand for food, which, in turn, are boosting the adoption of agricultural micronutrients for different types of crops. 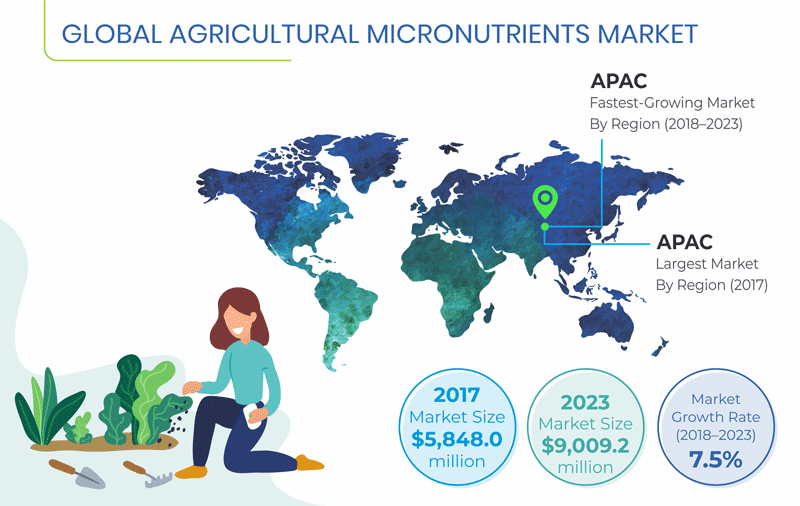 In recent years, there has been a substantial increase in horticulture and the farming of high-value crops, such as fruits, nuts, vegetables, and ornamental crops. Horticulture crops utilize substantially greater quantities of micronutrients, on a per hectare basis, than other agronomic crops. Additionally, the agricultural sector has witnessed major acquisition of farmlands by large companies. These developments are being seen as a major trend in the agricultural micronutrients market.

According to the United Nations Department of Economic and Social Affairs (UNDESA), the global population was 7.6 billion in 2017, and it is expected to reach nearly 9.8 billion by 2050, growing by 30.9% in this period. The population boom is expected to create an increasing demand for food and horticulture crops in the coming years. Additionally, the spillover effects caused by this increased population would include an increased pressure to improve the volume of the crops produced from farmlands. These factors create the need for the optimum utilization of existing farmlands and maximizing their yield. The adoption of agricultural micronutrients can solve the problem, which would drive the agricultural micronutrients market. 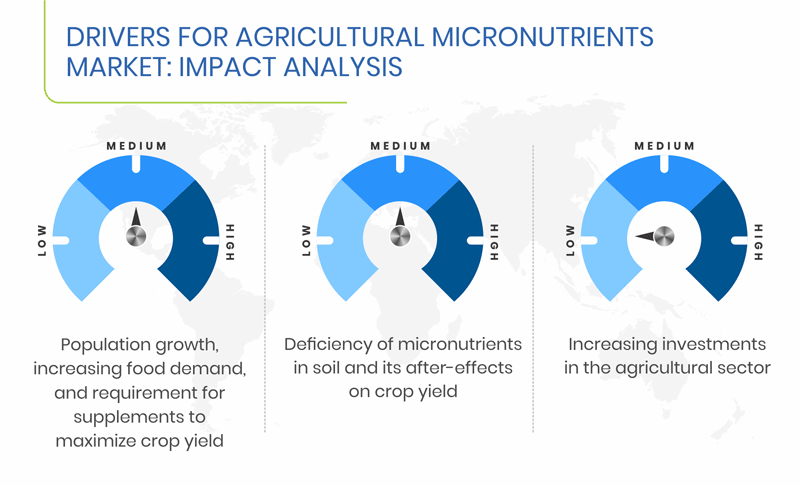 The practice of contract farming, one of the initiatives launched and supported by governments in countries such as India, is the major opportunity area for the growth of the global agricultural micronutrients market. It involves an agreement between farmers and processing firms, for the production and supply of agricultural products at predetermined prices. Additionally, the agreement involves these crop buyers to provide a degree of production support, such as supply of raw materials or technical expertise, to the farmer.

The zinc category generated the highest revenue, by type, in 2017. This can be ascribed to zinc being a major constituent of many proteins and enzymes in a plant and its importance in metabolic processes, including the production of hormones and elongation of the internodes.

The N,N'-Bis(2-hydroxybenzyl)ethylenediamine-N,N'-diacetic acid (HBED) category is expected to witness the fastest agricultural micronutrients market growth among all form factors, in terms of revenue, during the forecast period. This can be attributed to the higher stability constant of HBED than any other chelating agent and lower sensitivity to ultraviolet (UV) radiation. Additionally, such products do not contain any isomer, and hence the micronutrient content bonded with HBED is always fully available for the plant.

The fertigation category would exhibit the fastest revenue growth in the agricultural micronutrients market, during the forecast period, with a CAGR of 8.0%. In comparison to other application modes, fertigation better minimizes the risk of roots contracting soil-borne diseases, reduces soil erosion, decreases water consumption, increases nutrient absorption by the plants, and controls the rate of the fertilizers being released.

APAC was the largest agricultural micronutrients market during the historical period, and it is expected to maintain the trend during the forecast period, during which it would also witness the fastest growth. This can be mainly attributed to the high micronutrient deficiency in the soil and low biofortification of crops due to the continuous sowing and reaping cycles. In addition, the government of numerous regional countries is taking initiatives to educate farmers about the addition of micronutrients to the soil. Considering the future industry scenario, China is expected to lead the APAC market, generating revenue worth $1,485.2 million in 2023. 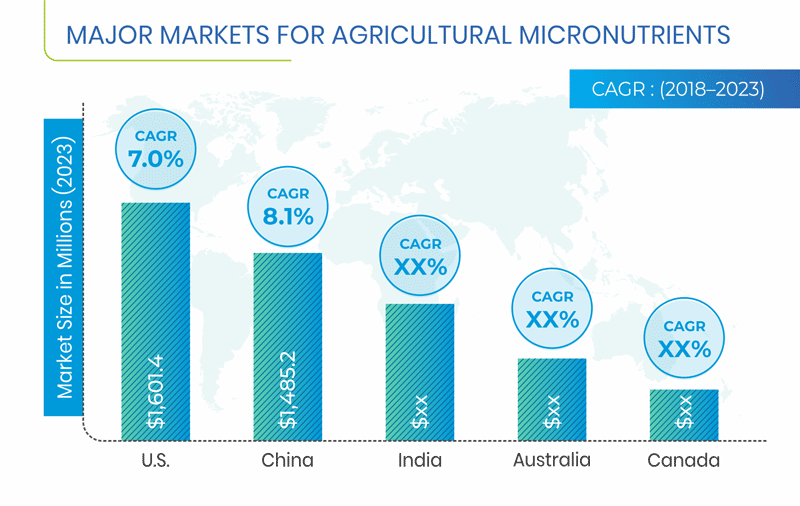 Some of the other key players operating in the agricultural micronutrients market are Haifa Group, Chambal Fertilisers and Chemicals Limited, Coromandel International Limited, and The Mosaic Company.

In recent years, the major players in the agricultural micronutrients market have taken several strategic measures, such as product launches and geographical expansions, to gain a competitive edge in the industry. For instance, in July 2018, Haifa Chemicals Limited launched a range of coated micronutrients, namely Multicote Micro, in the global market. The new product range provides balanced nutrition to plants, with the controlled release of calcium, zinc, and boron. The product launch will enhance the product portfolio of the company, thereby aiding it in tapping the growing market for agricultural micronutrients.

Moreover, in June 2018, BASF SE announced the strengthening of its value chain for chelated micronutrients, in Germany, through capacity addition at its production plant in Ludwigshafen. The investment for the capacity expansion is yet to be disclosed.

Based on Form Factor

Based on Application Mode