The global 5G satellite communication market revenue stood at $2,548.2 million in 2021, expanding with a robust CAGR of 33.3% during 2021–2030, to achieve $33,896.7 million by 2030. This is ascribed to the technological advancements and surge in the need for high-speed connectivity with low latency.

5G networks are playing a critical role in assisting governments and policymakers in transforming cities into smart cities, thereby allowing inhabitants to participate and realize in socioeconomic benefits provided by an advanced, digital, data-intensive economy. As a result, authorities will be required to build and upgrade passive assets, such as fiber networks and data centers. 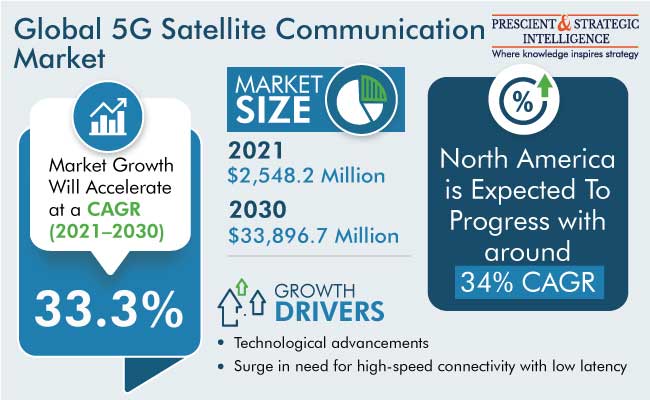 The backhaul and tower feed solutions accounted for the largest revenue share, over 80%, in 2021, and the category is expected to maintain its position in the coming years as well. This is attributed to the ability of the solutions to multicast high and ultra-high design content and videos to a huge coverage area across several systems. Furthermore, over the projected period, the demand for backhaul and tower feed satellite solutions will increase at a rapid pace, due to the rising number of 5G gadgets and customers’ desire for high-speed 5G connectivity with low latency.

Whereas, the hybrid multiplay category is expected to witness the fastest growth in the coming years. This can be ascribed to the capabilities of high-speed connectivity, including backhaul to individual homes and offices, as well as the capacity to multicast the same video across a vast coverage area. It also enables efficient BB connectivity for aggregated IoT data.

Increasing Demand for IoT in Defense

The integration of non-terrestrial technology has become increasingly crucial for defense forces, due to the evolving and growing aspect of geopolitical conflicts and wars. Advanced 5G satellite communication systems can help defense agencies improve their decision-making and strategic capabilities. A vital factor driving the adoption of satellite-enabled IoT in the defense sector is the lack of network services in remote terrains such as deserts, oceans, and mountains. Furthermore, as more innovative technologies are developed in the 5G satellite communication market, the demand for IoT solutions in the defense sector will likely grow in the coming years. Furthermore, future 5G networks integration with AI and machine learning will expand the potential for new applications and provide major revenue prospects to market players and stakeholders. 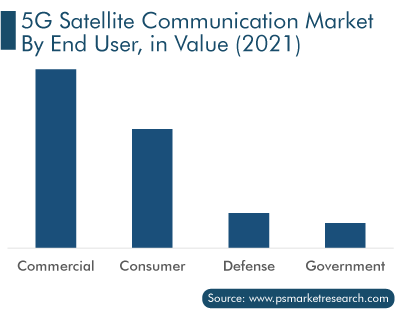 5G satellite communication technologies can provide cost-effective broadband and connectivity to the unconnected and remote areas of the world. Utilizing the latest generation of networks and satellite technology, the defense, government, and commercial industries, as well as individuals, are eager to adopt technologies that can assist in connecting and communicating with the remote parts of the world, where terrestrial networks do not operate. These aforementioned factors are responsible for the market growth.

Demand for LEO Satellites Will Propel the Market Growth

The GEO category will register the fastest growth in the market, with a CAGR of around 34%, during 2021–2030. This growth can be because of the various applications of GEO satellites, such as navigation, telecommunication, and real-time imaging. Whereas, the LEO category accounted for the largest revenue share in 2021 and it is further expected to maintain its position in the coming years. This is due to the cost-efficient structure for launching small satellites, such as nano, micro, and pico, in this orbit.

The commercial sector held the largest revenue share, of around 50%, in 2021, and it is further expected to maintain this trend in the future. This is primarily due to the increased need for 5G and satellite connections in several commercial fields, such as logistics and shipping, automobiles, and commercial aircraft. On the other hand, the government sector is projected to record the fastest growth during the forecast period. This growth can be ascribed to a variety of factors, including the rise in the need for high-speed communication and efficient monitoring of government valuable assets, as well as the emergence of improved 5G communication satellite services in the sector.

The North American 5G satellite communication market accounted for the largest revenue share, of over 30%, in 2021, and it is projected to reach around $12.0 billion by 2030, with the highest growth rate during the forecast period. This is due to the presence of a large number of key players in the region, which are highly involved in developing and offering 5G satellite communication solutions. Moreover, the U.S. brings the majority of the revenue to the regional market and it is also expected to maintain its position during 2021–2030.

Furthermore, the APAC market is expected to register the second-highest growth rate during the forecast period. Emerging economies, including China, contribute significantly to the regional market growth. This is mainly due to the high connectivity demand from a huge population base for consumer and industrial applications. Moreover, the technological advancements, the increase in R&D expenditure, and the development of new space systems by governments are some of the other key reasons propelling the APAC market extension. 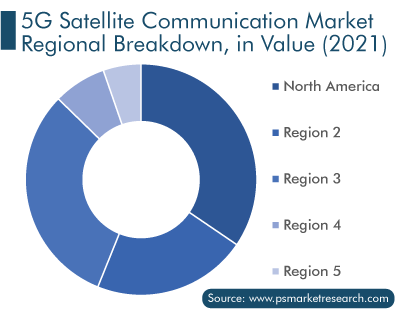 In recent years, players operating in the 5G satellite communication market have been involved in several strategic and technological developments, in order to achieve their respective industry dominance. Some of the strategic measures taken by the players are product developments and innovations, partnerships and collaborations, and business expansions and investments. For instance:

Based on Solution Type

Based on Spectrum Band

Frequently Asked Questions About This Report
What was the size of the 5G satellite communication market in 2021?+

What will be the growth rate of the 5G satellite communication market?+

Which is the largest end user of 5G satellite communication solutions?+

The commercial sector is the largest end user of 5G satellite communication solutions.

What are the major drivers for the 5G satellite communication market?+

The major drivers of the 5G satellite communication market include the rising demand for high-speed connectivity with low latency and the surging need for communication networks in rural or remote areas.