Valued at $16.9 billion in 2019, the global optical networking and communication market size is set to reach $32.8 billion by 2030, witnessing a CAGR of 6.2% during the forecast period (2020–2030). The factors resulting in the growth of the industry include the surging demand for high bandwidth, emergence of the internet of things (IoT) and machine-to-machine (M2M) technologies, and rising mobile data traffic.

The optical networking and communication market growth has shown a dip in 2020, owing to the disruption in global supply chains, due to the lockdown scenario implemented in the wake of the coronavirus (COVID-19) pandemic. Several factors, primarily the closure of manufacturing units, shopping malls, sports centers, hotels, and other facilities, due to the global lockdown, have been considered for forecasting the market numbers for 2020. The market will experience a resurgence in its growth rate in the coming years, due to the focus of organizations on fulfilling the surging demand for telecommunication equipment, owing to the rapid 5G deployment around the world. 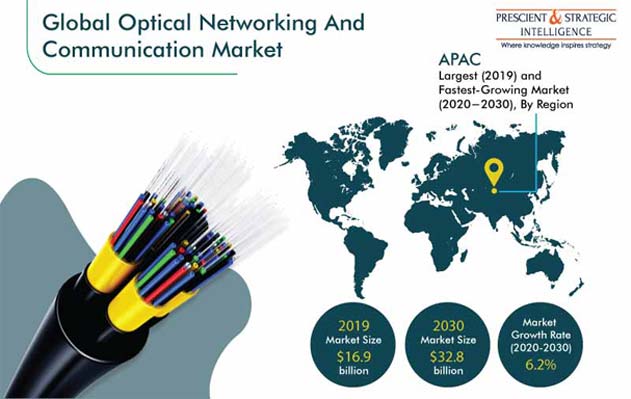 The WDM category is projected to attain a healthy growth rate during the forecast period in the optical networking and communication market, among all technology types. The consistent demand for high-speed data transfer is projected to result in the substantial growth of the WDM category. Additionally, the coarse wavelength division multiplexing (CWDM) technology can efficiently transport large volumes of data across telecom or enterprise networks. The fiber channels category is predicted to witness the highest CAGR during the forecast period.

Among all data transfer rate categories, the up to 40 Gbps category dominated the optical networking and communication market during the historical period (2014–2019). The demand for products that offer data speed greater than 100 Gbps is expected to record the fastest growth during the forecast period. Data centers that host massive amounts of content and cloud computing applications are at the center of the global information network, which is contributing to the market growth. Equipment makers are racing to keep up with the rapid growth in the content volume and demand for bandwidth, to process and distribute all of this information around the world.

Telecommunication End User To Continue Its Domination during Forecast Period

The telecommunication category, among all end users, is projected to continue its dominance during the forecast period in the optical networking and communication market. This would majorly be due to the rising smartphone and internet penetration and social media usage.

In developing countries, such as China and India, the focus on rapid infrastructure development, as well as network management and planning, in order to enhance optical networking and communication in their digitally paced landscapes, is high. For instance, Government of India is leveraging the increasing smartphone subscriber base in the country and acting proactively, with numerous initiatives and policies, to attract investments in the telecom sector and improve the connectivity in the country.

The APAC region held the largest revenue share in the global optical networking and communication market in 2019. The evolution of broadband services depends on the deployment of optical networks, and a considerable rise is being witnessed in broadband penetration in APAC countries.

In APAC, China, India, Malaysia, and the Philippines are displaying a high adoption rate of wireless communication and advancements in the IoT field, which are resulting in the rising demand for fiber optic cables in the region. Moreover, the presence of large market players, such as Fujikura Ltd. and Furukawa Electric Co. Ltd., offering optical fibers, electric fiber cables, and other optical network components, is another powerful factor supporting the market growth. In addition, a number of countries, such as India, China, and South Korea, are expected to increase the deployment of fiber-to-the-home (FTTH) solutions, backed by a constantly increasing expenditure on communication network infrastructure. 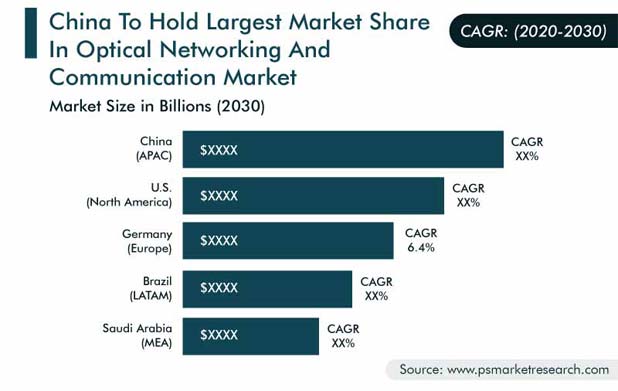 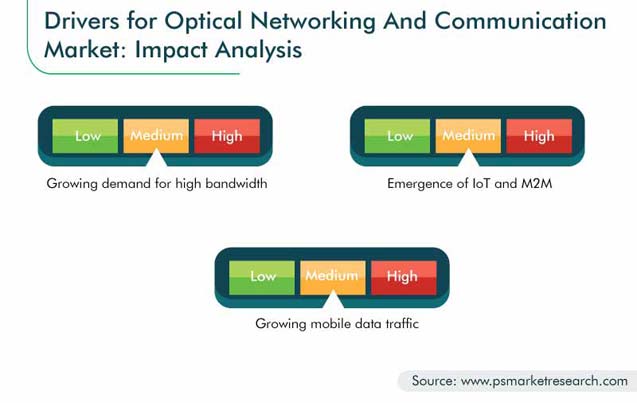 The growing bandwidth requirements, in the light of the increasing internet users and data traffic, are notable in the industry. The increasing dependence of economies and businesses on uninterrupted data connectivity is leading to a relentless demand for higher bandwidth, thereby further revolutionizing the optical networking and communication market, globally.

In addition, the increasing smartphone users and demand for data-intensive applications and data center growth across the globe are propelling the market. According to a report published by McKinsey & Company in 2019, India will see a rise of about 40% in internet users, while the number of smartphone users will double by 2023. All such factors are projected to help in the industry growth during the forecast period.

Emergence of IoT and M2M Is Propelling Industry

The emergence of the IoT and M2M technologies is propelling the optical networking and communication market. With the widespread adoption of the IoT and M2M technologies, robust network capacity has become imperative. The increase in the number of connected devices, along with the adoption of data-intensive applications, is driving the need for fiber optic networks offering higher data transfer speeds.

The deployment of IoT requires expanded data capabilities and high bandwidth, to support multiple connections with varying bandwidth needs; reliable internet connectivity is essential for IoT. Additionally, the surging data browsing and downloading rates across the globe are driving the optical networking and communication market.

The Industry Is Driven by Growing Mobile Data Traffic

Mobile data traffic is projected to grow by eightfold in the coming five to six years. This is mainly attributed to the perpetual demand for high-speed internet and adoption of IoT and other advanced technologies in almost all commercial and industrial settings, from manufacturing plants to commercial offices.

With the growing mobile data traffic, the demand for optical networking solutions is stimulating, globally, in order to cater to the high bandwidth requirements. Additionally, the global mobile data traffic is expected to grow two times faster than the global fixed internet protocol (IP) traffic. Technological advancements in networks, devices, and content ecosystems, in addition to the 4G traffic outpacing the 3G traffic, are further creating optical networking and communication market opportunities around the globe.

In recent years, companies have partnered with each other in order to improve their competitive edge in the industry. For instance: 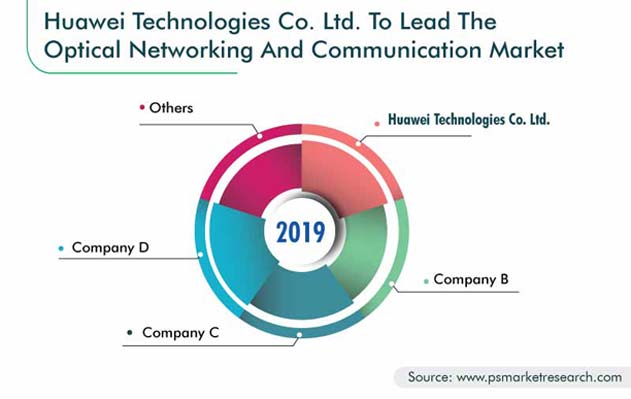 Some of the key players included in the global optical networking and communication market report are:

The optical networking and communication market report offers comprehensive market segmentation analysis along with market estimation for the period 2014–2030.

Based on Data Transfer Rate