From $2,035.3 million in 2019, the global VoWiFi market size is projected to reach $22,801.2 million by 2030, growing with a CAGR of 24.5% during the forecast period (2020–2030). The tremendous rise in the global Wi-Fi hotspot availability and significant improvement in the overall quality of service (QoS) for users are driving the growth of the voice over Wi-Fi (VoWiFi) industry across the globe.

The VoWiFi market growth has shown a spike in revenue generation during the coronavirus disease (COVID-19) pandemic, owing to the increasing usage of Wi-Fi at homes, for better connectivity in calling. Furthermore, the industry would experience rapid growth in the coming years, due to the consistently rising need of organizations to establish efficient employee communication, for smooth operations, and integration of advanced technologies, such as artificial intelligence (AI) and the internet of things (IoT). 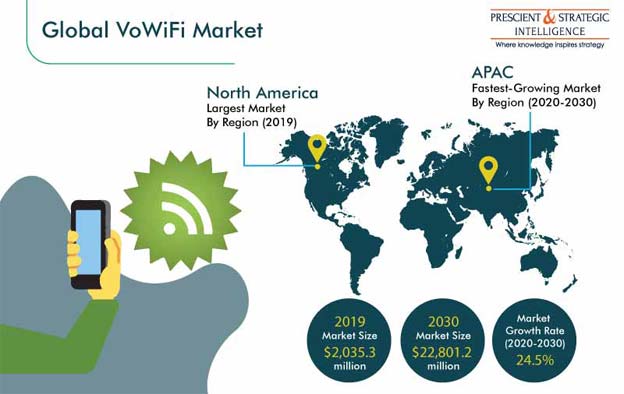 The integrated voice client category, on the basis of voice client, accounted for the major share in the VoWiFi market in 2019, primarily due to its use in smartphones. The category is also expected to advance at the highest CAGR, during the forecast period, as the smartphone adoption rate has witnessed substantial growth in recent years. The browser voice client category records the minimum CAGR, due to the fact that it is used only in laptops.

Voice Over IMS Category Generated Highest Revenue in Market in 2019

The voice over IP multimedia subsystem (IMS) category generated the highest revenue in the VoWiFi market in 2019, on the basis of technology, owing to the rapid deployment of the voice over long-term evolution (VoLTE) technology. The voice over LTE generic access (VoLGA) category is expected to witness the fastest growth during the forecast period, on account of its ability to provide VoLTE services by simply taking advantage of the network operator's 3G infrastructure.

The evolved packet core (EPC)-based architecture accounted for the major market share in the VoWiFi market in 2019, on the basis of architecture. Numerous companies around the world are focusing on improving their products and solutions and are thus deploying new and improved architecture, to serve their customers in the best possible way. For instance, in December 2019, an Australian communications service provider, Telstra Corporation Limited, signed an agreement with Telefonaktiebolaget LM Ericsson (operating as Ericsson) and successfully deployed a live cloud-native container-based evolved packet core, for 4G and 5G services.

Smartphones Category To Grow at Highest Rate during Forecast Period

The smartphones category is projected to attain the fastest growth, among all device types, during the forecast period in the VoWiFi market. The high adoption rate of smartphones across the globe is among the primary driving factor for this category. The most populous countries in the Asia-Pacific (APAC) region, such as China and India, are expected to have a sizeable share of the global smartphone market by 2030. For example, in 2019, for the first time, the Indian smartphone industry surpassed the U.S. market, considering the annual shipments, with 158 million smartphones shipped.

The residential category dominated the VoWiFi market during the historical period (2014–2019), between the two end user categories. The overall rise in the adoption and improvement of voice over Wi-Fi services in homes is attributed to the benefits offered by this technology, such as uninterrupted call service, even without the presence of a cellular network. The rise in the subscription of Wi-Fi connections, due to the expansion of the high-speed fiber-to-the-home (FTTH) network and affordable pricing structure, is supporting the industry growth in this category.

North America generated the highest revenue in the VoWiFi market in 2019, owing to the fact that the U.S. has a significant number of VoWiFi users and high average revenue per user (ARPU). Furthermore, the presence of major telecommunications players in the country, such as Verizon Wireless, T-Mobile USA Inc., AT&T Inc., and Sprint Corporation, is expected to help the market growth in the region during the forecast period. According to GSMA, T-Mobile (Deutsche Telekom) was the first company in the U.S. to launch the voice over Wi-Fi service, in 2007. After several rounds of upgradation and improvement in the service, it started gaining momentum in 2014.

Additionally, the regional players are focusing on partnering with major players, to offer improved products and services to their customers. For instance, in December 2015, under a five-year agreement, Nokia Networks partnered with WIND Mobile, its sole network infrastructure provider and innovation partner, to bring advanced LTE network technology to Canada.

APAC To Be Fastest-Growing Region in Industry

APAC is projected to witness the fastest growth in the industry and surpass North America, to become the largest VoWiFi market, during the forecast period. VoLTE technology’s penetration is the highest in the world in South Korea and Japan. South Korea, Japan, and China are among the early adopters of the VoWiFi technology in the region. Furthermore, China has the world's largest VoLTE subscriber base, with its major telecom operators, including China Mobile, China Telecom, and China Unicom. These operators are advancing their Wi-Fi network across the country, which is helping in the provision of VoWiFi services to the citizens.

Along with these countries, other regional countries such as Australia, Vietnam, and India, are also gearing up to launch the 5G network, which will open new avenues for the growth of the APAC VoWiFi market. India is preparing to participate in the race, with the deployment of Wi-Fi networks in major cities. For example, in May 2019, an Indian telecom company, BSNL, entered into a partnership with Google, in order to expand its Wi-Fi footprint in India. 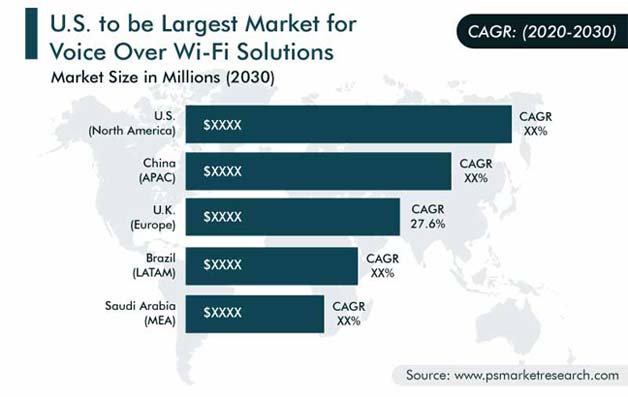 As there is a continuous rise in mobile data usage around the world, the congestion on operators’ networks is increasing. A highly congested network may not offer the expected service quality to subscribers, and thus, there is a trend of offloading the mobile data traffic to the Wi-Fi network. As per research, by 2022, the amount of mobile traffic being offloaded to Wi-Fi networks will reach around 60% of the total mobile data traffic, or approximately 110 exabytes per month.

In North America, 67% of the mobile traffic was offloaded in 2017, which is expected to reach 76% by 2022. A similar trend is expected to appear in the Latin American (LATAM) region, where the offloading data is projected to reach 6 exabytes per month. All these factors will fuel the use of Wi-Fi networks and, in turn, augment the VoWiFi market growth globally.

The rise in the global Wi-Fi hotspot coverage is driving the growth of the VoWiFi market. In the past couple of years, various governments have spent a sizeable amount on the deployment of Wi-Fi hotspots in public places. Back in 2017, there were 124 million public wireless local area network (WLAN) and community hotspots in the world, which are further expected to number 550 million by 2022. Factors such as free access to Wi-Fi (promoting other services), community Wi-Fi hotspots, and higher capacity and speed of Wi-Fi are playing a supportive role in the market growth. The APAC region leads the way in the number of public Wi-Fi hotspots, with projections of around 261 million hotspots being made by the year 2022.

A remarkable improvement is being witnessed in the QoS offered to the subscribers, since the launch of voice over Wi-Fi services. This technology enables users to remain connected over the call, even without a mobile signal. VoWiFi allows users to reliably make and receive calls, without installing any additional app or upgrading the smartphone. Further, voice over Wi-Fi uses the existing subscriber identification module (SIM) security mechanisms to authenticate and protect communications. It also offers a seamless transfer of the network during the ongoing call, from the Wi-Fi to cellular network. Poor indoor coverage problems at homes, shops, and offices and availability of voice over Wi-Fi at low prices enable mobile operators to expand their services further.

As the number of voice over Wi-Fi service launches in countries across the world is continuously increasing, the global VoWiFi market is moving toward a fragmented stage, with the presence of major players such as Verizon Wireless, China Mobile Limited, AT&T Inc., T-Mobile USA Inc., and Vodafone Group Plc.

In order to gain a competitive edge in the market, industry players are entering into partnerships and agreements. For instance: 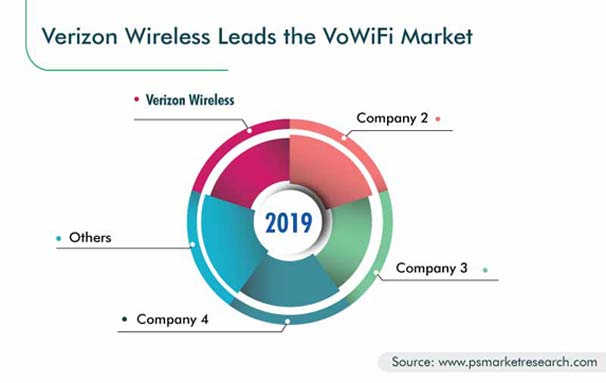 Some of the key players included in the VoWiFi market report include:

The VoWiFi market report offers comprehensive market segmentation analysis along with market estimation for the period 2014–2030.

Based on Voice Client