The global vision sensor market is predicted to register a CAGR of 12.7% during the forecast period (2020–2030), reaching $9.2 billion by 2030 from $2.5 billion in 2019. Among all the regions, Asia-Pacific (APAC) is expected to register the fastest growth during the forecast period. This would be attributed to the growing demand for vision sensors from automotive and packaging industries. 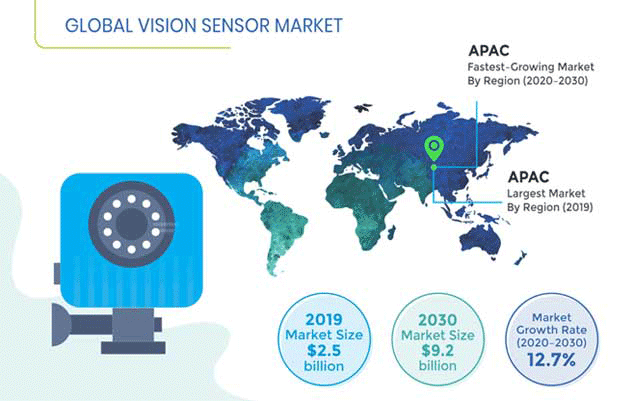 Growing demand for vision sensors from automotive industry is another key factor driving the market. Automotive industry requires vision sensor for inspection, localization, and identification applications. Owing to the rising number of vehicle production across the globe, primarily in developing countries such as Indonesia and Thailand, there is an increasing demand for these sensors for making the manufacturing processes faster in the automotive industry. Moreover, with the expansion of automakers in developing countries, primarily Indonesia, demand for vision sensors is increasing positively year-over-year (YoY). This is because compared to European and North American nations, these developing countries offer raw material and labor at lower costs, which increases the profit margins for automakers.

Apart from this, surging demand for industrial automation solutions is a key opportunity observed in the market. With rising Industry 4.0, demand for automation in several industrial processes is expected to increase in the coming years. Driven by government support, manufacturers are increasingly implementing automation in the manufacturing processes to increase the productivity, efficiency, and thereby to increase their revenues. In industrial automation, sensors play an important role for making the products automatic and intelligent. For instance, vision sensors are used for inspection of manufactured products in automotive, electronics, and food & beverage industries. Hence, growing demand for industrial automation, primarily in developing countries, is expected to create opportunity for the market players during the forecast period. 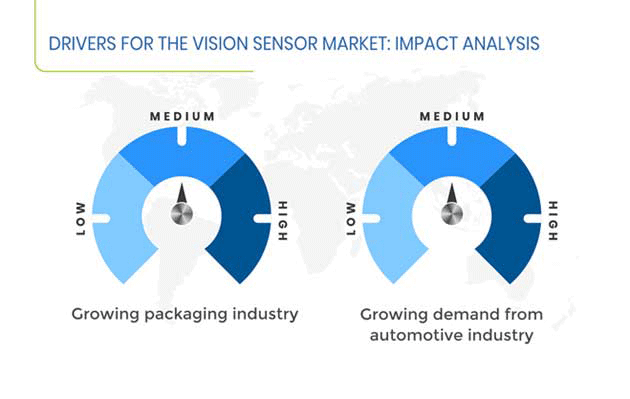 Sales of Vision Sensors To Rise Fastest to Packaging Companies

Among all the industry, packaging industry is expected to be the fastest growing market during the forecast period. This can be attributed to the growing demand for flexible packaging, predominantly in countries including the U.S., and China, owing to increasing advancements in the packaging technology. For instance, according to Flexible Packaging Association, in 2017, the flexible packaging industry increased to $31.0 billion from $23.2 billion in 2009. Additionally, with rising purchasing power and improving standard of living of the populace, along with the demand for packaged goods, the packaging industry is growing at a faster rate globally. The quality of packaging is important in many industries, especially food and beverage and pharmaceutical, as it is instrumental in protecting the products from spoilage.

APAC dominated the vision sensor market in 2019, a situation that is unlikely to alter over the forecast period. This can be attributed to growing automobile industry, rising population, and increasing demand for consumer electronics appliances in the region. In terms of automotive industry, the market is predominantly driven by the adoption of electric vehicles (EVs), wherein, China and Japan constituted largest market share driven by government support. For instance, the government of both China and Japan are offering subsidies to increase the sales of electric vehicles. Further, the Chinese government has allotted a subsidy of over $10,000 per vehicle in 2017, due to which China recorded rise in adoption of EVs by over 42% from 2016. With rising adoption of EVs, automotive manufacturers are increasingly setting-up the manufacturing plants in the region. Due to this, demand for vision sensors from automotive industry is expected to increase during the forecast period. 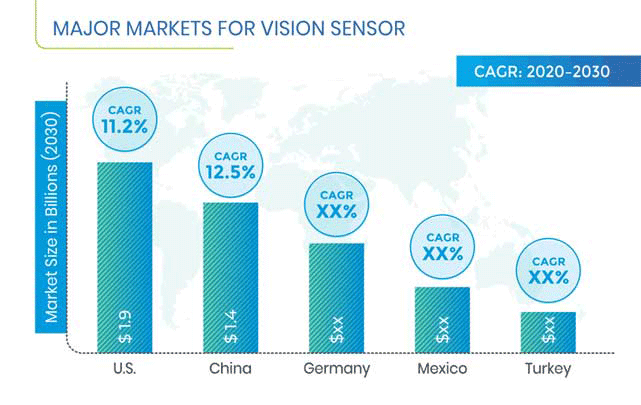 In the recent years, the key players in the vision sensor market have taken several strategic measures including product launches, partnerships, and mergers & acquisitions, to improve their position in the market. For instance, in November 2019, OMRON Corporation launched a 3D vision sensing technology suitable for vision sensors to identify the orientation and position of the target objects three-dimensionally. Using this technology, the industrial robots would enable an accurate and faster assembly of the bulk parts by automating the human-rigorous process in assembly and inspection of the objects.