The global tablet PC market recorded 239 million units of shipment in 2014. The market is mainly driven by increasing consumer interest toward computing gadgets that are smaller than laptops or desktop PCs, but are bigger than smartphones, providing efficient functionalities and portability. The market shipment is expected to grow at a CAGR of 3.8% during the forecast period, reaching 306,307.9 thousand units by 2020. This can be attributed to the advancement in 3D tablets in North America and Europe. 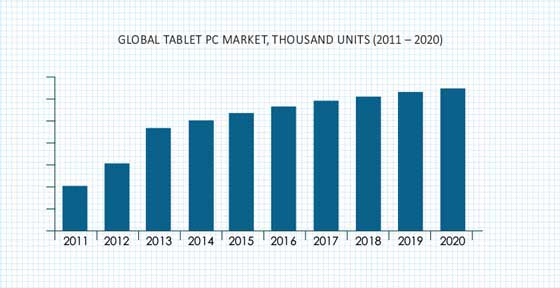 Based on platform, the tablet PC market is classified into iOS, Android, Windows, and others. Among these, the iOS category dominated the market in 2014, in terms of unit sales. This is attributed to the high sales of Apple’s iOS-based devices, such as iTouch and iPads, across the globe.

On the basis of screen size, tablets are categorized into <8 inches, 8–11 inches, and >11 inches. Among these, 8–11 inches category held the largest share in the tablet PC market in 2014. This is due to the fact that 8–11 inches tablets are mid-sized PCs that serve “on the go” purpose and are highly portable.

Geographically, the Asia-Pacific (APAC) region held the largest shipment of tablet PCs in 2014. This is attributed to the increasing demand for these PCs from countries such as China, India, and Japan. Rising disposable income in developing countries, such as India and China, would proliferate the adoption of iOS-based tablet PCs in the coming years.

Growing proliferation of video and gaming content has made 3D a mainstream technology. Advancement in 3D technology has led to the wide adoption of tablets. The 3D tablet market is driven by autostereoscopic technology, which allows viewing 3D images without using 3D glasses. Due to the stylish look and features, such as 3D cameras, 3D games, 3D movies, along with autostereoscopic 3D displays, consumers are opting for 3D tablet PCs. Companies, such as LG, Samsung, Reliance, ASUSTeK, and Sony, are trying to position themselves in the 3D tablet PC market. ASUS Nexus 7, with 3D graphic display, is a recent product launched by ASUSTeK. Swipe Telecom introduced 3D tablet, known as Swipe 3D Life, in 2011. Recent innovations, such as dual-lens 3D cameras and 3D-enabled device applications, are considerably increasing the demand for 3D-enabled tablet devices.

A key trend observed in the tablet PC market is the rising popularity of hybrid tablet over a traditional personal computer. Combination of portability and easiness of using tablet PC, along with its productivity features, is driving the market toward hybrid tablet PC. According to Pew Research Centre (a nonpartisan American fact tank), as of January 2014, every second American adult (over 16 years) possessed a tablet PC, and according to the U.S. Census bureau’s report, in 2013, 78.5% of all the U.S. households had a desktop or a laptop computer. The increasing trend of using tablet PCs is rapidly becoming the preferred choice over the traditional PCs.

The growing healthcare industry is increasing the demand for new and better medical technology products, across the globe. Tablet PCs are gaining popularity in healthcare monitoring systems, owing to the simple explanation of the diagnosis process and reduced paperwork handling, which would otherwise be time-consuming. According to MobiHealthNews survey, adoption of these PCs among physicians rose globally from 30% in 2010 to 62% in 2011 and 72% in 2012. Therefore, the rising adoption of tablets in hospitals would provide ample opportunities to drive the tablet PC market growth.

Laptop, desktop PC, and phablet are direct substitutes of the tablet PC, and different specifications and features offered by these direct substitutes are the major hindrance to the tablet PC market. Modern tablet PCs comes with a storage capacity of 16–250 GB under different brand offerings. Whereas, some of the most sophisticated and advanced laptops offer greater storage capacity, close to 1 TB. The laptop has the advantage of large storage that is not available in tablet PC. Also, other useful features that tablets lack are a physical keyboard, standard universal serial bus (USB) ports, local-area network (LAN) ports, and additional display ports. Lack of such features could hamper the market growth.