Asia-Pacific (APAC) among all regions is expected to witness highest CAGR in the spintronics market during the forecast period. This can be attributed to the growing demand for cloud storage, internet of things (IoT) devices, electric vehicles (EVs), and autonomous vehicle in the region. APAC held the largest EV market share, where 700,416 EVs were sold in 2019, accounting for 44.8% of the global EV market. 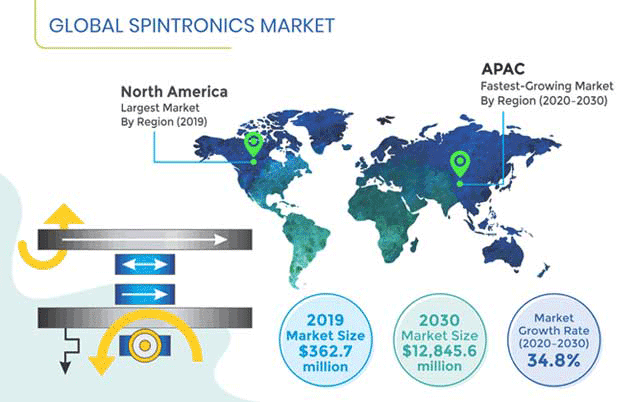 The major trend that is witnessed in the spintronics market is the advancements in the field of spin-transfer torque magnetoresistive random-access memory (STT-MRAM). The conventional toggle MRAMs are implemented with latest technologies to attain high speed, high efficiency, and low operating cost. The new type of MRAM uses STT magnetic tunnel junction (STT-MTJs) to flip the spin of the electron through spin-polarized current. This technology is gaining traction in the market as it offers scalability in terms of memory density, which can be achieved at lower cost as opposed to toggle MRAM. STT-MRAM has the ability to achieve write speed of 14 ns, which is used in different embedded memory applications, such as for cache in IoT and artificial intelligence (AI).

Increasing demand for MRAMs is observed as one of the major drivers for the spintronics market. MRAM is a non-volatile memory technology, which uses electron spinning to reverse the magnetization of a layer and consequently store data in the memory using electrical current instead of applying a magnetic field. Unlike traditional RAMs, MRAM is capable of retaining the data even in the absence of power. Additionally, MRAMs consume less power and exhibit high transfer speeds. Owing to these features, the demand for MRAM is rising significantly. 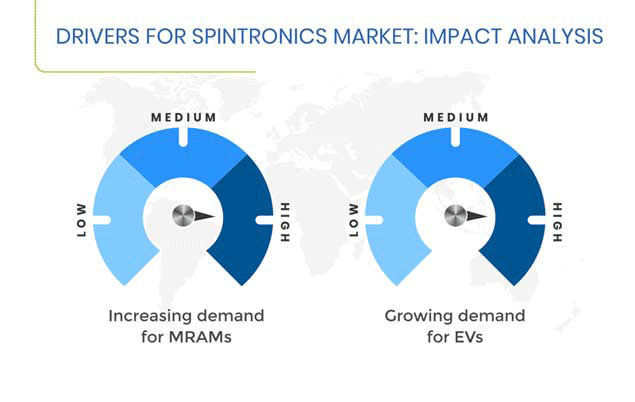 The metal-based category in device type held the largest share in the market in 2019. Metal-based device is made using ultrathin ferromagnetic films, which allow the control of the spin of electrons by using external magnetic field. It ensures high-speed data transfer and low energy consumption. However, with commercialization of spin transistors including field-effect transistors (FETs), growing deployment of 5G, and increase in adoption of IoT, the semiconductor-based spintronics market is projected to witness fastest growth during the forecast period.

The MRAM application category held the largest share in the spintronics market in 2019. MRAM exhibits non-volatility and low power consumption, and also allows unlimited read and write operations, which are not offered by conventional memory technologies.

The IT & telecom was the largest end-use market for spintronics in 2019. Increasing adoption of connected cloud and IoT, and digital transformation of industries have led to increased demand for stable and reliable data center network. However, the healthcare category in the end user segment is projected to exhibit highest CAGR in the spintronics market during the forecast period. This can be attributed to the advancement in spintronic-based magnetic sensors, which are expected to be leveraged for detecting tumor cells in human body. With the development of more advanced sensors, their adoption is expected to increase in healthcare sector during the forecast period.

North America was the largest region in the global spintronics market during the historical period. This is attributed to the growing cloud market in the region. Cloud service providers, such as Amazon Web Services Inc., Microsoft Corporation, and Google LLC, have started deploying MRAM for cloud computing applications. The region is ascribed as major hub of data centers. Additionally, the region has witnessed rising requirement of high bandwidth in data centers, rapid migration to cloud computing, and growing adoption of fiber optic cables for high-speed internet communication, which boost the demand for spintronics products.

During the forecast period, the APAC spintronics market is projected to exhibit highest CAGR. Growing demand for EVs, IoT devices, and cloud storage in the region is projected to spur the demand for spintronic devices during the forecast period. For instance, tunnel magnetoresistance (TMR)-based magnetic sensor can be used for precise current monitoring, where it would provide essential monitoring of information including battery life and health and would also predict excessive loading or faults in machines. 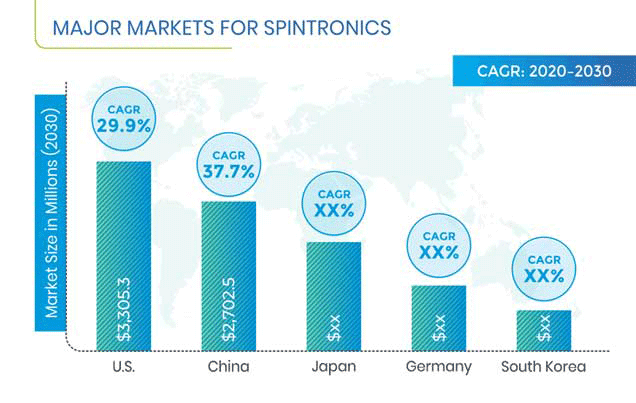 The companies operating in the spintronics market are spending heavily in research and development (R&D) and still working toward full-fledged commercialization. A small number of companies such as Everspin Technologies Inc., NVE Corporation, and Spin Memory Inc. have commercialized the spintronics product on large scale.

The market players are primarily focused on product launches and R&D to gain competitive edge in the industry. For instance, in December 2019, NVE Corporation launched high-field TMR magnetic switch, which is a low-voltage, low-power, and omnidirectional TMR magnetic switch. The new sensor switch has a duty cycle of 3000hz and typical operating point at 350 millitesla (mT). It can operate at high magnetic fields. The switch is sensitive to fields in all directions, and digital output turns on or off depending on the intensity of the magnetic field.

The spintronics market report offers comprehensive market segmentation analysis along with market estimation for the period 2014–2030.