The global radiofrequency (RF) transceiver market size was $3,892.1 million in 2019, and it is projected to witness a CAGR of 0.8% during the forecast period (2020–2030). The growing adoption of mobile communication technologies, such as 4G and 5G, and rising demand for the internet of things (IoT) technology have been observed as the primary drivers for the market. Falling prices of RF transceivers, attributed to increase in economies of scale pertaining to manufacturing and anticipated drop in demand for communication technology such as 2G and 3G in coming years, are expected to lead to decrease in the overall market size during the forecast period.

The COVID-19 pandemic has impacted the RF transceiver market, with key economies, including China, India, the U.S., and European countries, witnessing a temporary shutdown of industries due to the lockdown implemented by the governments. The pandemic has also impacted the supply chain of electronic components for original equipment manufacturers (OEMs), which, in turn, has impacted the manufacturing and market growth of RF transceivers. Asia-Pacific (APAC) countries, including China, Vietnam, South Korea, Taiwan, Japan, and India, are the major manufacturers of RF transceivers, and intermittent lockdowns in these countries have severely impacted production and trade activities. 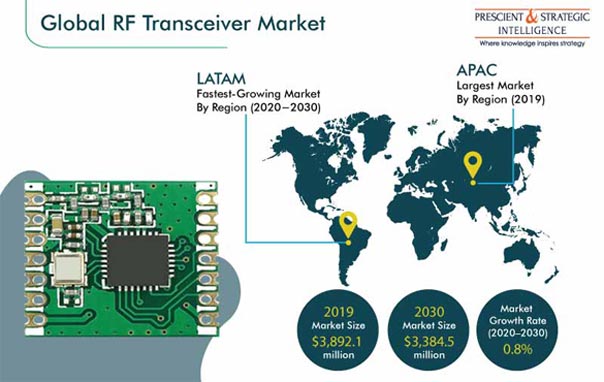 In the RF transceiver market outlook, on the basis of design, the single-chip transceiver category generated the highest revenue in 2019. Single-chip transceivers are witnessing an increasing demand owing to their widespread usage in mobile devices, routers, and modems. These variants consume low power and can work with low voltage in a wireless system.

Within the type segment of the RF transceiver market, 5G transceivers are projected to exhibit the fastest growth during the forecast period. The market opportunities for 5G technology are vast; regions such as North America and Europe would witness a rapid deployment of 5G in the coming years, with several government initiatives and plans regarding the deployment of the technology in various industries having already been implemented.

In the RF transceiver market, the mobile devices category, among applications, is generating a huge demand, owing to the massive production of mobile phones worldwide. With the growing population across the globe and rising dependence on the mobile communication technology, the market has seen a proliferation of mobile devices and adoption of 3G and 4G.

The consumer electronics vertical was the highest-revenue-generating category in the RF transceiver market in 2019. The consistent growth in the adoption of smartphones, tablets, laptops, gaming consoles, surveillance systems, networking equipment, and IoT, along with the rapid infrastructure developments, is catalyzing the RF transceiver market advance in the consumer electronics category.

The Asia-Pacific (APAC) RF transceiver market is growing at a steady rate, owing to the surging demand for smartphones and deployment of 5G in China, Japan, and South Korea. The 5G deployment rate would accelerate in China owing to the ‘Made in China 2025’ roadmap, which envisages 5G as playing a transformative role in China’s ambition to gain a worldwide lead in a range of new technologies, such as industrial IoT, cloud computing, and AI.

Owing to the rising internet penetration and massive adoption of smartphones and 4G and 5G technologies, the LATAM region is expected to demonstrate the fastest market growth during the forecast period. It has been projected that the 5G network would cover more than half the region by 2030. Moreover, mobile operators are heavily investing in their content and media capabilities, along with 5G services and IoT applications. The growth in the market can also be attributed to the upgradation of large and ultra-large data centers from 10 G transceivers to new 40 G and 100 G transceivers, for higher digital signal transmission speed.

Due to the increasing technological advancements and growing demand for reliable, seamless, and secure communication, there is a high demand for wideband transceivers across the world. Wideband transceivers help prevent architecture redesigning issues, besides offering long-range wireless connectivity. In view of this, several market players are increasingly focusing on the launch of new, improved products. For instance, in 2018, Analog Devices Inc., under its RadioVerse technology platform, launched ADRV9009, a wideband RF transceiver. With this transceiver, the company aimed at accelerating the deployment of 5G and offering sustainable 2G, 3G, and 4G coverage.

A key factor contributing to the growth of the RF transceiver market is the surging usage of smartphones across the world. Besides developed economies, their penetration has grown rapidly in developing countries too. According to the Global System for Mobile Communications Association’s (GSMA) State of Mobile Internet Connectivity Report 2019, there are currently 3.5 billion smartphone users across the world, with these devices being the primary medium for internet access. 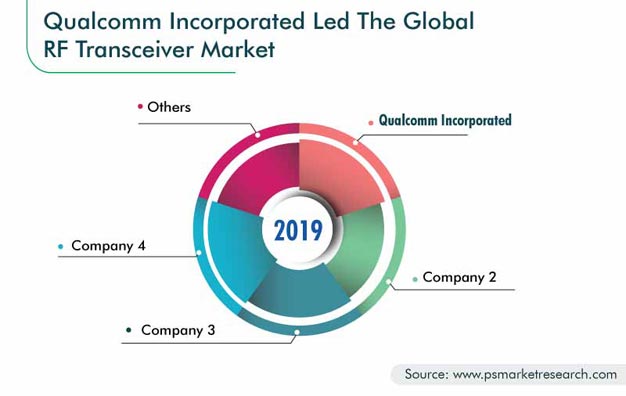 Some of the Key Market Players Listed in the RF Transceiver Market Report are: