From $100.3 billion in 2019, the global pharmaceutical fine chemicals market is predicted to advance at a CAGR of 6.2% during the forecast period (2020–2030). The major factors driving the growth of the industry are the swift expansion of the pharmaceutical domain in Asia-Pacific (APAC) and booming population of the elderly. 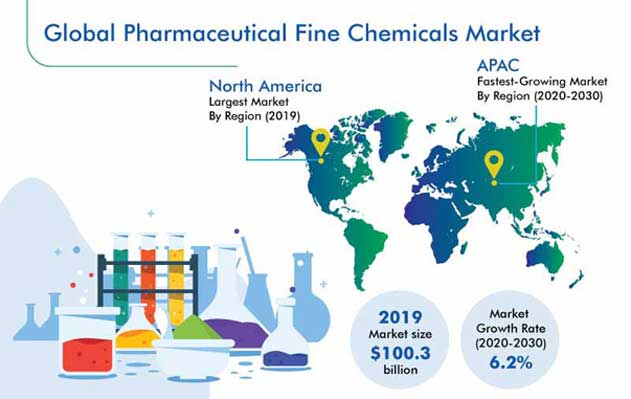 In 2019, the proprietary drug bifurcation, under the drug type segment, generated higher revenue in the pharmaceutical fine chemicals market, as a result of the fact that the production of such drugs entails high capital investment, strong research and development (R&D) efforts, compliance to stringent regulations, and adequate quality control measures. Proprietary drugs are more in demand throughout the world, and pharma firms are mandated to ensure the integrity of the ingredients, to ultimately make the final product effective and safe.

Till 2030, the cardiovascular classification, on the basis of application, would hold the largest revenue share in the pharmaceutical fine chemicals market, on account of the rising prevalence of cardiovascular diseases, including coronary artery disease, arrhythmias, stroke, and hypertension. This is resulting in the rising demand for heart medication, which is, in turn, leading to the heavy consumption of an array of fine chemicals for their manufacturing.

North America dominated the pharmaceutical fine chemicals market during the historical period (2014–2019), as the region is home to the largest pharmaceutical sector in the world, and it also accounts for a high healthcare expenditure. Further, a number of drug manufacturers, including Johnson & Johnson, Abbott Laboratories, and Pfizer Inc., are pursuing R&D to come up with medication for an increasing number of presently-untreatable diseases. 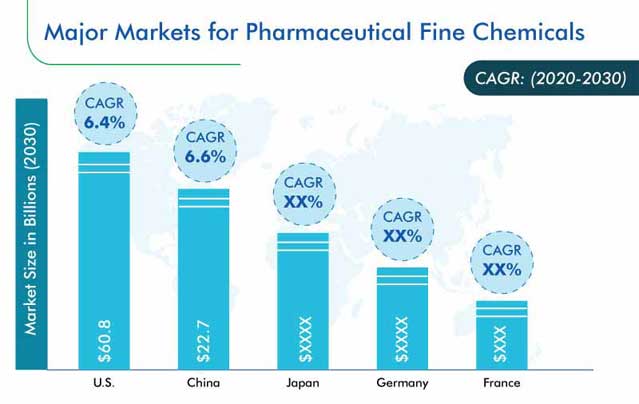 One of the most important growth drivers for the pharmaceutical fine chemicals market is the increasing population of the elderly. As per the latest World Population Ageing report published by the United Nations Department of Economic and Social Affairs (UNDESA) in 2019, there were 703 billion people in the age group of 65 and above in the world in 2019, and their number is on path to rising to 1.5 billion by 2050. Due to their immunocompromised nature and physical weakness, they fall sick quite often, thus create a high requirement for various medical drugs. Therefore, with the increasing demand for different drugs for the elderly, the consumption of the chemicals that go into their production will also go up.

A key opportunity area for the pharmaceutical fine chemicals market is the increasing awareness in several countries of Africa. The government of many regional countries, including Kenya and Nigeria, is promoting the local production of medical drugs, which is aimed at enhancing the accessibility of such products. Countries in Africa are focusing on improving the health of the public, with the ultimate aim to have a large, healthy workforce for the benefit of the national economy. Thus, with continued public and private support for the augmentation in local drug production, the consumption of pharmaceutical fine chemicals has a potential to increase drastically in Africa.

On similar lines, in December 2018, Lonza Group Ltd. signed an agreement with GE Healthcare, under which the latter company would provide the former with a biologics production plant in Guangzhou, China. With this move, Lonza aimed to fulfill the increasing demand for contract manufacturing and developing services in the country. 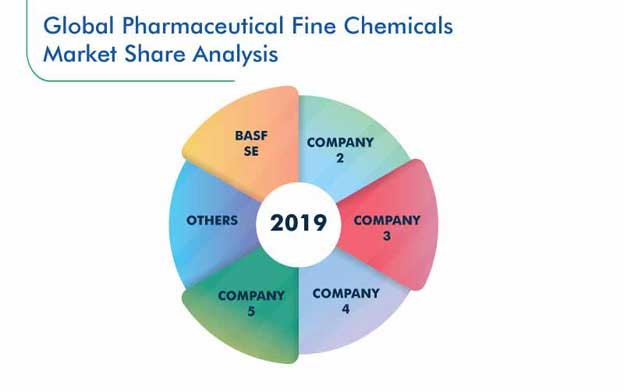