The global music composing software market size stood at $177.4 million in 2019, and it is expected to reach $1,871.5 million by 2030, exhibiting a CAGR of 23.8% during the forecast period (2020–2030). The key factors driving the industry growth include the increasing utilization of online music streaming services, consistent growth of the media and entertainment industry, strong preference for classical music shows, and growing need for effective collaboration among musicians.

The COVID-19 outbreak has resulted in the fast growth of the music composing software market during 2020. Due to the lockdown situation across the globe, all live shows and concerts have been canceled. This has increased the demand for uploading more content on different music streaming platforms, with distributors witnessing an increase of 20–40% in the amount of content being uploaded. As a result, the utilization of music composing software is projected to witness strong growth in the coming years. 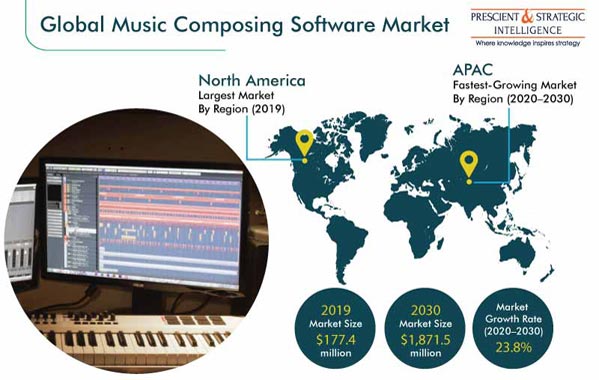 The full orchestra category, on the basis of instrument simulation, is expected to witness the fastest growth in the music composing software market during the forecast period. This can be attributed to the increasing number of live concerts and corporate events across the globe. In addition, the rising focus on virtual orchestra and deployment of digital technologies, such as extended reality (XR) and mixed reality (MR), is expected to result in the high usage of music composing software, thereby resulting in enhanced market growth.

On the basis of deployment, the music composing software market is bifurcated into on-premises and cloud. Of the two, the on-premises category held the larger share in the market in 2019. This can be mainly attributed to the data security concerns pertaining to music leak and increasing focus on sending musical tracks through a secured network and effectively working with other members.

The iOS category, based on operating system, is expected to register the fastest growth in the music composing software market during the forecast period. This can be ascribed to the increasing number of iPhone users, especially in the North American region, availability of digital audio workstation (DAW), and easy synchronization of multiple kinds of applications with the operating system. Moreover, according to StatCounter, the iOS operating system held a 59.3% share among all mobile operating systems in August 2020 in the U.S., which is also expected to support the growth of the market.

Globally, North America led the music composing software market during the historical period (2014–2019). The major factors resulting in the market growth in North America include the rapid growth of the music industry, rising demand for music streaming services, strong focus on the integration of next-generation technologies for music composition, increasing focus of musicians on providing online music, and strong presence of market players in the region.

Moreover, according to the Recording Industry Association of America (RIAA) Music Revenue Report 2019, revenue from recorded music in the U.S. grew by 13%, from $9.8 billion in 2018 to $11.1 billion in 2019, at the estimated retail value. The revenue from recorded music measured at the wholesale value grew by 11%, reaching $7.3 billion in 2019. Additionally, streaming services in the U.S. music industry held the dominating share of 79%, generating revenue of $8.8 billion in 2019. As a result, the demand for music composing software is projected to increase, thus further contributing toward the regional market growth.

APAC is expected to register the fastest industry growth during the forecast period. The market is primarily driven by the growing media and entertainment industry in Australia, Japan, South Korea, China, and India and rising number of live music concerts. Moreover, movies, music albums, and video games have been generating significant revenue in the Chinese media and entertainment market. Though the Indian music composing software market is in the niche stage and accounts for a small share, the country holds immense potential for the adoption of the software, owing to the large number of budding musicians and presence of a number of music schools in the country.

Moreover, various music associations in the region, such as the Japanese Society of Rights of Authors, Composers, and Publishers (JSRACP), Federation of Music Producers Japan (FMPJ), and Music Composer Association of India (MCAI), are taking initiatives to increase the awareness about these music composing software, through conferences, live music concerts, and music summits. 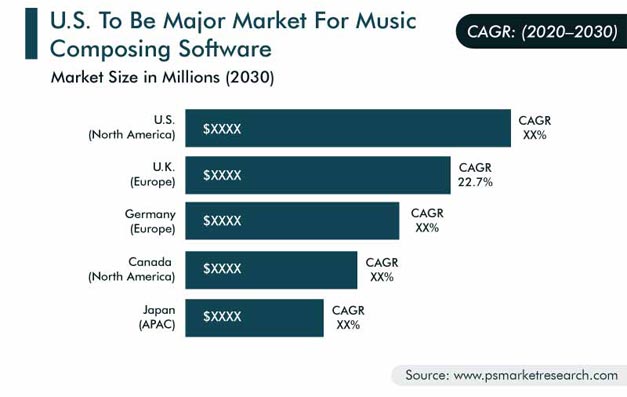 The increasing number of live concerts and music events, due to the growing number of musicians, is driving the growth of the global music composing software market. Another major factor behind this is the increasing initiatives of organizations, such as the American Society of Composers, Authors, and Publishers (ASCAP), to promote musicians, by organizing live concerts, music contests, and conferences. According to Bachtrack Ltd., a London-based international online music magazine, 20,535 classical music concerts were performed in 2019. In addition, listed performances stood at 34,648, which also included opera and dance. With such an increasing number of live music performances, the demand for music composing software is expected to rise in the coming years.

The music composing software market is consolidated in nature, with the presence of established players such as Ableton AG, Apple Inc., Image Line NV, and Avid Technology Inc. The dominance of these market players is mainly due to their brand reputation and availability of customization options for instant playback, different text styles in music scores, and more ways to enter notes in a score. Moreover, these companies, as part of their growth strategy, are focusing on introducing new features and launching upgraded versions of the software as per consumers’ requirements, which further contributes toward their strong market position. 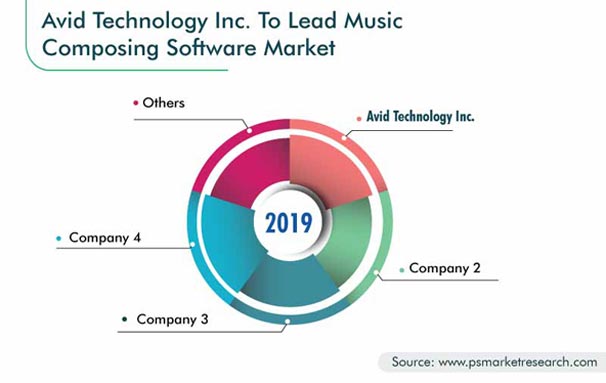 Some of the Key Players in the Music Composing Software Market Report Are:

Based on Instrument Simulation

Based on Operating System