The global muscle relaxant drugs market is predicted to grow at a CAGR of 5.5% during the forecast period (2015–2020). The progress of the market is due to various factors, such as the increasing prevalence of skin diseases and harmful effects of ultraviolet radiation, rise in the usage of neuromuscular blocking agents in surgeries, growing geriatric population, and increase in disposable income leading to an increase in spends on facial aesthetic therapies. 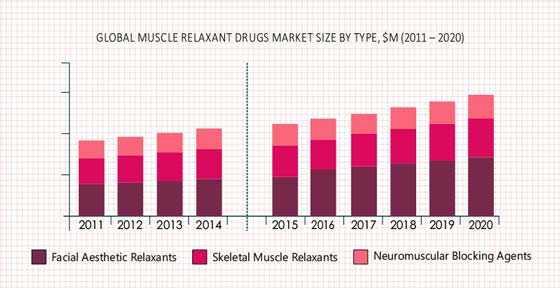 On the basis of type, the muscle relaxant drugs market is divided into facial aesthetics relaxants, neuromuscular blocking agents, and skeletal muscle relaxants. Out of these, facial aesthetics relaxants accounted for the largest share of the market throughout the historical period (2011–2014). Further, this category is also expected to witness the highest CAGR during the forecast period, primarily due to the high safety and efficiency of these relaxants.

Geographically, North America contributed the highest revenue to the muscle relaxant drugs market during the historical period. This was due to the increasing usage of facial muscle relaxants and growing geriatric population in the region. Asia is predicted to witness the fastest growth during the forecast period owing to the rising surgery volume and bettering healthcare infrastructure.

The key trends being observed in the muscle relaxant drugs market are the increasing popularity of muscle relaxant treatments in the cosmetic industry and rising online retailing of such drugs. Muscle relaxant drugs such as carisoprodol, metaxalone, and baclofen, have been made available online to the public by numerous retailers and pharma firms. Online retailing increases the drug accessibility, is more time saving and convenient, and offers discounted prices, thereby becoming a key trend in the market.

Due to the increasing pollution, excessive alcohol and tobacco consumption, and ultraviolet radiation, the skin elasticity reduces and it becomes prone to sunburns. Furthermore, acne, the most common dermatological condition, affects the majority of the world population. Botulinum toxin-based muscle relaxant procedures are used to treat these skin diseases, which leads to the growth of the muscle relaxant drugs market.

Factors, such as the stringent regulatory requirements, risks associated with muscle relaxants, and high capital expenditure, are obstructing the growth of the muscle relaxant drugs market.

The construction of new facilities across the world is being taken up by the major muscle relaxant drugs market players to expand their reach and augment their production capacities. For instance, GlaxoSmithKline PLC commenced building a large tablet manufacturing plant in Vemgal, Karnataka, India in September 2015.