Valued at $3,713.3 million in 2019, the global low strength proppants market size is projected to witness a CAGR of 9.8% during the forecast period (2020–2030). Increasing exploration & production (E&P) activities and technological advancements for crude oil recovery are some of the major factors driving the low strength proppants industry.

The COVID-19 pandemic has impacted the global market to a great extent with the shutdown of rigs and halt in oil & gas operations, across the globe. The total rig count witnessed a steep fall from 2,073 rigs in January 2020 to 1,514 rigs in April 2020. In addition, oil & gas exploration activities are at a standstill across the globe, which, in turn, has impacted the crude oil prices at a global level. 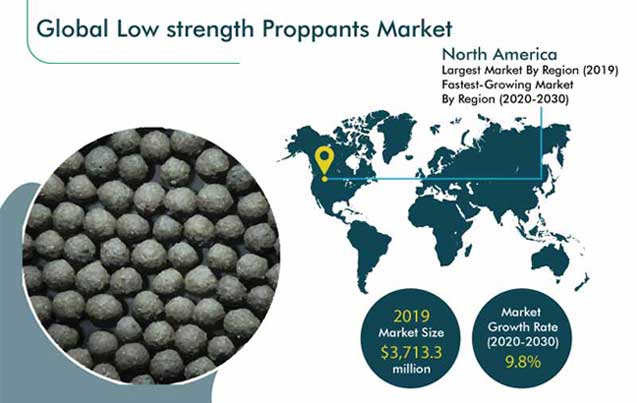 The crude oil category held the largest market size in the low strength proppants industry in 2019 based on end use. This is majorly attributed to the increasing consumption of crude oil and the presence of a large number of unconventional oil reserves across the world. Countries including the U.S., the U.K., Saudi Arabia, and Russia are putting an immense focus on production of unconventional oil in high volumes, which, in turn, is boosting the consumption of low-density proppants.

According to International Association of Energy Economics, unconventional oil is projected to account for 3.0% of the global crude oil production in 2020. In addition, this production volume of unconventional oil is expected to increase from 3.05 million barrels per day (mbpd) in 2020 to 3.75 mbpd by 2030. Owing to such factors, crude oil is projected to retain a large share in the low strength proppants market. With the increase in E&P activities across the globe, the consumption of low-density proppants is projected to increase during the forecast period.

During the historical period (2014–2019), North America held largest low strength proppants market share, which is ascribed to the increase in the number of drilled wells, along with discoveries of unconventional oil and gas reserves, in the region. In addition, the region has availability of both conventional and unconventional resources in abundance, and in order to extract these resources, low-density proppants are required in high volumes.

The North American region is expected to demonstrate the fastest growth on account of rapid increase in E&P activities, along with the increasing investments in the sector by large players. In addition, the region is home to some of the largest players involved in the global market, which include Royal Dutch Shell plc, ConocoPhillips, and Chevron Corporation. Further, North America is one of the largest producers of coal-bed methane and accounted for around 20% share in the global coal-bed methane production in 2019. Hence, such factors are expected to continue fueling the growth of the low strength proppants market. 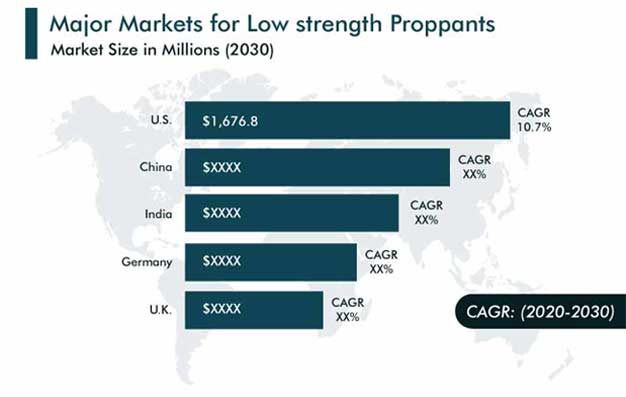 Over the years, the North American region has significantly contributed in conventional as well unconventional oil & gas production. U.S. accounts for nearly 80% of the newly drilled wells in the region. Canada too is garnering pace with the opening up of its shale reserves for commercial exploration. With the increasing E&P activities in the region, the consumption of low-strength proppants is projected to increase, owing to its ability to increase the flow of oil or gas during hydraulic fracturing process. All these factors are expected to drive the growth of the low strength proppants market in the North American region in the forecast period.

Market players across North American and APAC regions are making hefty technological investments in order to enhance exploration of new oil & gas reserves. In addition, energy production, particularly in the U.S., is projected to witness massive growth, on account of which new and improved technologies are being developed to ensure high business growth and easy recovery processes. This, in turn, is expected to ramp up consumption of low-density proppants and thereby boost the low strength proppants market.

In recent years, players in the market are putting immense focus on facility and geographic expansion in order to gain a competitive edge in the low strength proppants market. For instance: 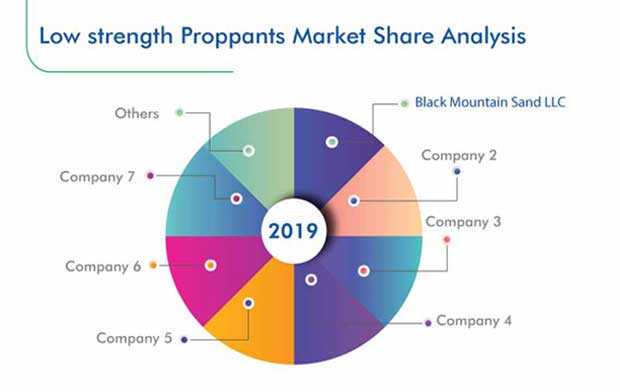 Some of the key market players in Low Strength Proppants Market include: