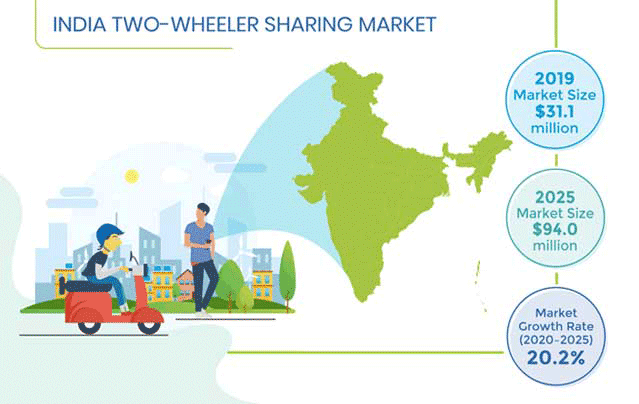 Two-wheeler sharing service is a low-priced convenient solution for commuting, and therefore, its adoption is increasing rapidly in India. People are no more required to spend huge money on the purchase of two-wheelers and bear various costs, such as maintenance costs, insurance costs, parking arrangements, and other similar costs and responsibilities. The service can easily be accessed as users can book and locate two-wheelers through smartphone applications mostly available on google play store and iOS application store. Motorcycle/scooter sharing service is found to be approximately 25–40% cheaper than a cab booking.

In India, government is providing incentives and subsidies for the adoption of electric vehicles as part of eco-friendly mobility program. This provides huge growth potential to two-wheeler sharing service providers as the market is gradually shifting toward the adoption of electric two-wheelers. The electric motorcycles/scooters and bicycles help in reducing the burden of air pollution and also fulfil the demand for self-drive electric two-wheelers for first- and last-mile connectivity.

In terms of vehicle type, the motorcycle/scooter category dominated the Indian two-wheeler sharing market during the historical period, and is expected to continue dominating the market during the forecast period as well. This can be attributed to the significant growth in the bike taxi, sharing and rental category, as it is playing major role in solving the problem of first- and last-mile connectivity issues of people in India.

In the motorcycle/scooter category, the bike taxi category accounted for largest share in the Indian two-wheeler sharing market in 2019, and is expected to witness fastest growth during the forecast period. The category has reported double-digit growth (albeit on a smaller base) in recent years, on account of the expanding operations of market players in several cities and the increasing acceptance of bike taxis in the National Capital Region (NCR) and Hyderabad. In addition, one of the major service providers, Roppen Transportation Services Pvt. Ltd. (Rapido) has been expanding its operations in major cities of India continuously.

Geographically, the southern region was the largest market for two-wheeler sharing service in 2019, and is expected to follow the same trend during the forecast period as well. This can be attributed to the fact that most of the two-wheeler sharing companies are present in cities, such as Bengaluru, Hyderabad, Chennai, and the majority of new start-ups have started and scaled-up their operations from this region.

From the last couple of years, majority of players operating in the Indian two-wheeler sharing market have taken strong strategic measures to remain competitive in the market, such as partnerships, securing investments from various investors and giant shared mobility providers, and new service area expansions. For instance, Vogo Automotive Pvt. Ltd. (Vogo) raised $3.7 million (INR 25 crore) fund, which was led by Alteria Capital Advisors LLP, in June 2019. Vogo will leverage this amount in the expansion of its two-wheeler rental service across India.