The Indian single-cylinder pumpset market size stood at $1,126.8 Million in 2019, and it is set to grow at a CAGR of 5.3% during the forecast period (2020–2030). The rising population leading to an increasing pressure on the agriculture sector, along with the strong government support for the industrial sector, is the key growth factor driving the single-cylinder pumpset industry in India.

The ongoing COVID-19 pandemic has had a negative impact on the Indian single-cylinder pumpset market, owing to the shutting down of commercial spaces and industrial facilities, in order to curtail the spread of the disease. This has temporarily put the production of single-cylinder pumpsets on hold, as well as reduced the demand for these systems. 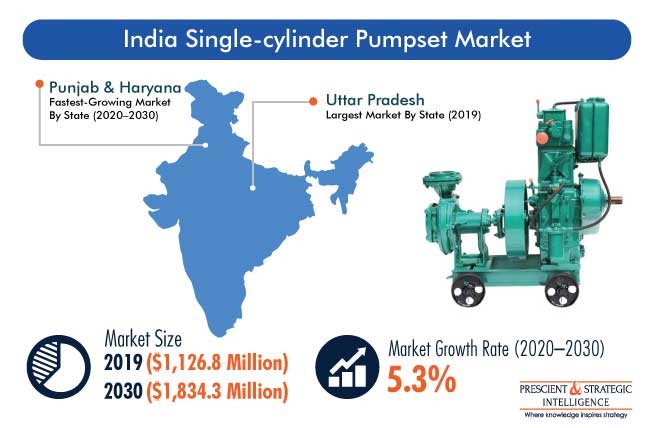 In 2019, the below 5 HP category held the largest value share in the Indian single-cylinder pumpset market, on the basis of power rating. This can be mainly attributed to the increasing adoption of these pumpsets for small-scale commercial applications, along with irrigation and livestock watering purposes in the agricultural sector.

On the basis of fuel type, the diesel category is expected to retain its dominance in the Indian single-cylinder pumpset market during the forecast period. This can be attributed to the high fuel efficiency of diesel pumpsets, along with the lower fuel cost, which, in turn, reduce the overall operational cost of a single-cylinder pumpset.

The agriculture sector is expected to demonstrate the fastest-growing usage of single-cylinder pumpsets during the forecast period. This growth is ascribed to the increasing preference for such pumpsets for irrigation and livestock watering purposes. With the rising crop production in the country, in order to suffice the demand for food, the usage of pumpsets on unused arable land is likely to increase in the coming years, in turn, promoting the growth of the Indian single-cylinder pumpset market.

Submersible pumps witnessed the higher demand in 2019, on the basis of pump type. The demand trend is likely to continue, since submersible pumps are cost-effective and have a higher efficiency, due to which they enjoy a higher preference. Additionally, problems pertaining to cavitation and the elevation difference between the pump and fluid surface are eliminated by submersible pumps.

On the basis of engine capacity, the below 150 cc category is projected to witness the highest volume CAGR during the forecast period, to continue dominating the market. This is majorly attributed to the high preference for these engines for pumpsets ranging between 3 HP and 10 HP. These engines are majorly adopted for pumpsets installed in agricultural fields for irrigation purposes.

In 2019, Uttar Pradesh accounted for the highest demand for single-cylinder pumpsets, on account of the increasing requirement for these systems in the agriculture and industrial sectors. Uttar Pradesh’s economy is based mainly on agriculture, with it being the largest wheat- and sugarcane-producing state in India. With a significant chunk of India’s agricultural activities taking place in the state, the demand for pumpsets is high here.

Punjab & Haryana are expected to demonstrate the fastest-growing adoption of pumpsets with single-cylinders, primarily due to the large-scale agricultural activities requiring groundwater for irrigation purposes. Additionally, the vast availability of unused arable land in the two states offers immense potential for growth to the market in the coming years, with pumpsets being highly important for agriculture. 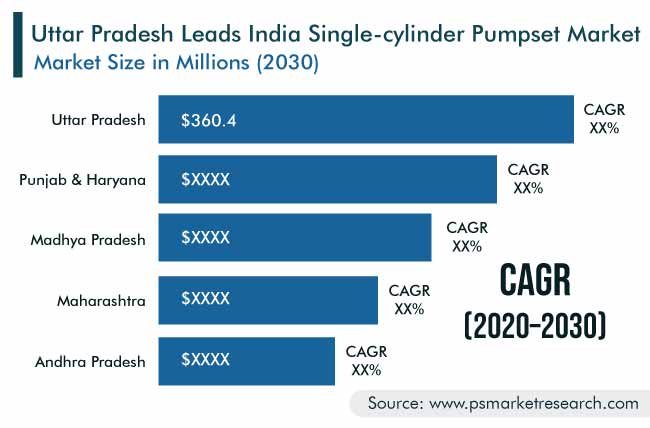 The population in India is increasing at a rapid pace. According to the United Nations World Population Prospects 2019 report, India’s population rose by 1.04%, from 1.35 billion in 2018 to 1.36 billion in 2019. The rising population is expected to create a supplementary demand for food crops, horticulture crops, and cash crops in the coming years. In order to suffice the market demand, the usage of pumpsets on arable land is increasing at a great pace. This, along with the strong government support, is expected to create an addition need for land suitable for cultivation, in order to increase the yield, thereby increasing the demand for pumpsets for irrigation purposes.

Pumpsets are widely adopted in industrial sectors, such as oil & gas, water & wastewater management, metal & mining, and power generation. In recent years, these sectors have showcased tremendous growth, on account of an increase in investments, along with the strong government support. For instance, electrification in India is garnering support under schemes such as the Integrated Power Development Scheme, Deen Dayal Upadhyay Gram Jyoti Yojana, and Ujwal DISCOM Assurance Yojana. With such supportive schemes in the country, the usage of pumpsets in these sectors is likely to increase in the coming years, in turn, promoting the growth of the Indian single-cylinder pumpset market. 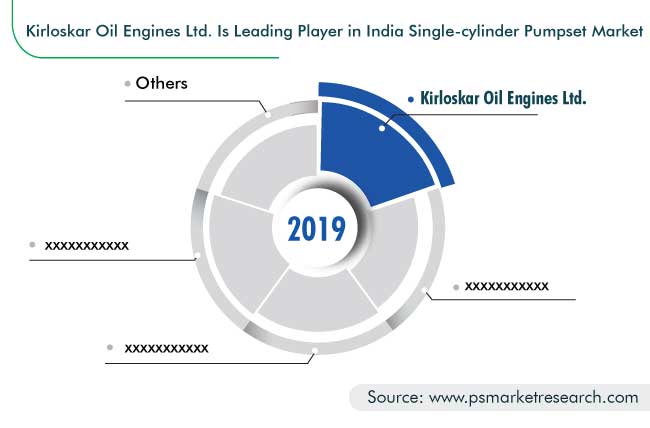 Some of the key players in the India single-cylinder pumpset market are:

Based on Pump Type