The Indian metal bonding adhesives market stood at $198.9 million in 2019 and is projected to reach $343.6 million by 2030, registering a CAGR of 5.2% during the forecast period (2020–2030). The market isprimarily led by the increasing demand for metal bonding adhesives for industrial applications, including ultracentrifuge rotors, base plates, cooling water pumps, reaction injection molding machines, and industrial pumps. 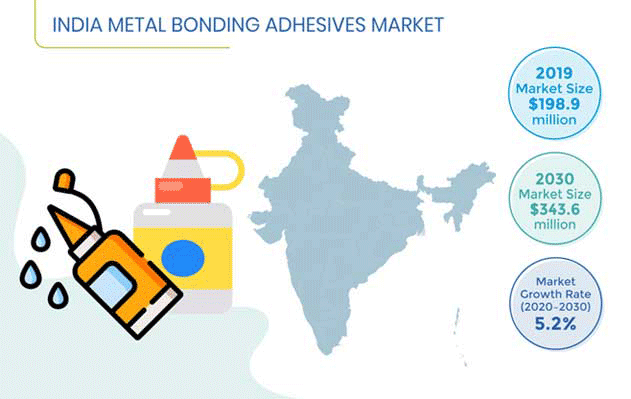 The key trend observed in the Indian metal bonding adhesives market is the consumer shift from traditional fasteners to metal bonding adhesives, driven by their advantages such as low cost, light weight, fuel economy, eco-friendliness, and better aesthetics of the final product. Aircraft and automobile manufacturers are increasingly preferring these adhesives over rivets and other mechanical fasteners, owing to their easy usage and ability to distribute loads evenly. Additionally, with the advent of electric vehicles and the growing focus on vehicular weight reduction and fuel economy, the demand for these adhesives in the country is expected to further increase in the near future.

Growth in the manufacturing sector is a major factor driving the metal bonding adhesives market in India. According to the India Brand Equity Foundation, India’s manufacturing sector reached $91.2 billion during April 2000–June 2019, primarily driven by the rise in foreign direct investments. Besides, various government initiatives, including Make in India, have propelled the growth in the sector, thereby opening new avenues for manufacturing companies and for the adoption of advanced industrial machinery. This has further led to the demand for adhesives that are used for joining metal substrates. The advantages associated with these adhesives have fueled their demand in recent years, and the growth in the manufacturing sector is further expected to positively impact the market for these adhesives in the coming years. 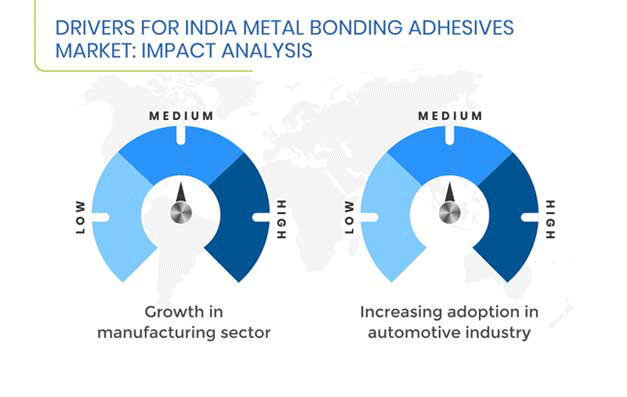 The healthcare industry is offering a huge opportunity for the growth of the players operating in the Indian metal bonding adhesives market. The healthcare industry in the country is projected to reach $372 billion by 2022 and is expected to generate a huge demand for healthcare equipment. Since metal bonding adhesives are widely used during the production of healthcare equipment, including X-ray machines, surgical equipment, biosensors, and implantable devices, the projected increase in demand for medical equipment will broaden the scope for the adoption of these adhesives in the country.

Epoxy adhesives held the largest share in the Indian metal bonding adhesives market in 2019, when the market was segmented on the basis of resin. As compared to other adhesives, epoxy adhesives demonstrate more resistance to extreme temperatures, chemicals, moisture, stress, oil, and other solvents and show compatibility with various metals, including aluminum, zinc, copper, mild steel, and stainless steel.

The automotive category is the largest revenue-generating category in terms of application in the Indian metal bonding adhesives market and is expected to hold more than 30% share in 2030. This can be mainly ascribed to the high volumetric demand for automotive components on account of the growth in the automotive and transportation industries. Owing to advantages such as high bonding strength, chemical resistance, non-flammability, rapid curing speed, and shock resistance, these adhesives are widely used for metal bonding applications in this category.

In recent years, players in the Indian metal bonding adhesives market have taken several strategic measures, such as product launches, partnerships, and facility expansions, to gain a competitive edge in the industry. For instance, in November 2019, BASF SE announced plans to double its capacity for polymer dispersions in Dahej, India. These dispersions serve the construction, coatings, paper, and adhesives markets in the country.

Moreover, in March 2019, Pidilite Industries Limited collaborated with Jowat SE to exclusively handle the sales and distribution of the entire range of Jowat adhesives in India and other neighboring countries, namely Sri Lanka, Bangladesh, and Nepal.