The India gensets market size stood at $554.5 million in 2019, and it is set to grow at a CAGR of 6.8% during the forecast period (2020–2030). This is mainly attributed to the rising demand for medium- and high-power gensets from the commercial sector and growing construction and manufacturing industries.

The COVID-19 pandemic has created a negative impact on the India gensets market, owing to the shutting down of commercial and industrial establishments in order to curtail the spread of the disease. This has not only temporarily put the production of gensets on hold, but also led to a massive slump in demand. 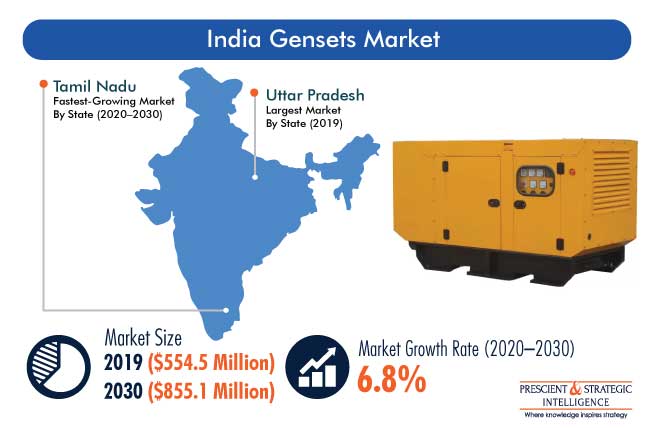 Below 6 kVA Gensets Will Witness Fastest-Growing Demand during Forecast period, Owing to the High demand in Residential and Commercial Applications

During the forecast years, below 6 kilovolt-Ampere (kVA) category will be the fastest-growing category in the India gensets industry, on the basis of power rating. Gensets with a power rating of below 6 kVA are highly suitable for residential facilities, small parties, and get-together events, to help in meeting auxiliary power requirements. With the increasing investments in the construction of commercial complexes and residential societies, the demand for such generators is likely to increase, thereby propelling the India gensets market.

During the forecast period, the backup power category is expected to continue to hold the larger share in the power requirement segment. This is mainly attributed to the rising installation of gensets in houses, retail shops, commercial buildings, clinics, hospitality units, manufacturing facilities, and other facilities, as a backup electricity source. In order to prevent power outages due to the aging electricity grid infrastructure and natural calamities, along with adverse weather conditions, people in the country have started installing generators powered by various fuels, such as diesel, gasoline, and liquified petroleum gas (LPG).

Commercial Application To Generate the Largest Revenue, Owing To Increasing Adoption of Gensets in Commercial Establishments

The commercial category is the largest revenue generating category in the India gensets market during the forecast period, based on application. This is majorly attributed to the high adoption of gensets for power supply in telecom towers, restaurants, malls, hotels, and other commercial establishments, which would drive the demand for gensets in the commercial sector in the coming time.

Telecom Towers To Witness Considerable Demand for Generators within Commercial Applications, Owing To Rising Need for Medium- and High-Power Gensets In Offices and Data Centers.

Commercial applications are subcategorized into retail establishments, telecom towers, hospitals, hotels, and others. Among these, telecom towers are likely to witness the highest demand for generators during the forecast period, on account of the constant requirement for prime power and backup power in such settings. In addition, government initiatives, including the National Digital Communications Policy, are expected to draw investments of nearly $100 billion in the telecom sector by 2022 and facilitate the installation of an additional 100,000 mobile towers, to cater to the requirements of a compounding subscriber base.

Genset engines with a capacity of over 201 cc–400 cc is projected to witness the highest demand in the India gensets market during the forecast period. The growing demand for a higher engine capacity is due to the requirement for gensets with robust and stable performance in heavier-load application areas, including industrial and commercial sectors. In addition, higher engine capacity also enables the genset to respond quickly and positively to sudden load additions.

Diesel Is Most Popular Fuel in Industry, Owing to Highest Efficiency Over Others

Gensets fueled by diesel have been the most popular in the country till 2019, and this category is further expected to dominate the India gensets market during the forecast period. This can be ascribed to the growing requirement for diesel gensets in commercial, residential, and industrial applications, owing to their easy availability and low cost. In addition, the fast-paced industrialization across the country happens to be one of the chief factors inducing growth in the requirement for diesel gensets in India.

Uttar Pradesh, Maharashtra, Tamil Nadu, and Andhra Pradesh Accounted for Major Market Share, Due To Increasing Requirement of Prime and Backup Power in these States

In 2019, Uttar Pradesh, Maharashtra, Andhra Pradesh, and Tamil Nadu were four of the highest-revenue-generating states in the India gensets market. This can be ascribed to the rise in the investments in the telecom sector and development of commercial infrastructure, along with an increase in the prime and backup power requirements in the residential facilities in these states. For instance, telecom operators, such as Bharti Airtel Limited and Reliance Jio Infocomm Limited, plan to augment their telecom infrastructure by installing telecom towers in these states, in a bid to enhance connectivity and acquire a larger customer base, in the process, generating a high demand for gensets.

Other factors, such as the recovery in the Indian residential and commercial real estate sectors, leading to the commissioning of new construction projects, and a resurgence in investments in the manufacturing sector are expected to support the growth of the India gensets market during the forecast period.

Tamil Nadu To Demonstrate Fastest-Growing Demand, Owing To Rising Demand in Metallurgical and Petrochemical Industries in the State

One of the major factors responsible for driving the industry growth in Tamil Nadu is the presence of numerous market players in the state. In addition, the market holds a strong potential for growth, with manufacturers pursuing capacity expansions in the southern part of the country. For instance, in January 2018, Perkins commenced the production of 500 kVA 2506D and 625 kVA 2806D engines at its production facility in Hosur, Tamil Nadu. 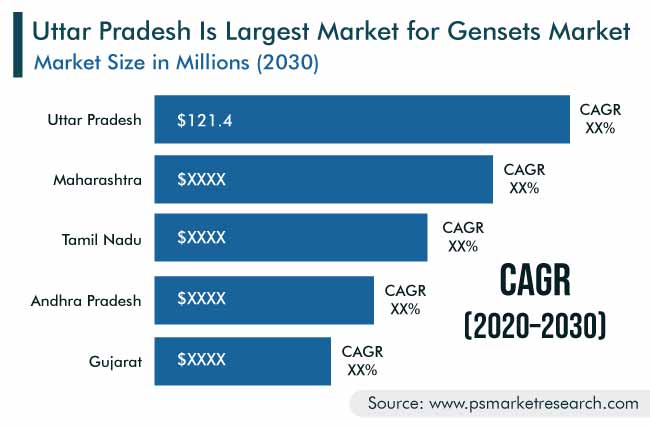 The usage of gensets in India is monitored under a government regulatory framework, owing to the toxic chemical emissions generated during their operations. In recent times, there has been a rise in the concerns regarding the alarming pollution levels in metropolitan cities, such as Delhi, Mumbai, Chennai, and Kolkata. Due to this, the government has implemented stringent laws regarding particulate matter (PM) emissions from diesel generators.

In 2016, the country proposed the rollout of the Bharat Stage VI (BS-VI) emission standards, which were implemented nationwide on April 1, 2020. These standards cover emissions from diesel generators and other equipment with internal combustion engines. Therefore, such stringent regulations are likely to create a negative impact on the India gensets market.

The Indian manufacturing industry is poised to grow on account of government initiatives, such as Make in India, support and outreach programs for micro, small, and medium enterprises (MSMEs), and investments in industrial corridors. This, in turn, is likely to generate a high demand for gensets from the manufacturing industry for meeting centralized, captive, and uninterrupted power supply needs.

With the setting up of new facilities, the sale of generators is likely to rise, in order to meet the demand for continuous power supply. Owing to such factors, the India gensets market is expected to witness growth in the coming years.

The Indian construction industry is witnessing notable growth on account of the investments by private and public players, expansion of urban housing infrastructure, and development of commercial installations, such as telecom towers and logistics centers. This, in turn, is propelling the installation of DG sets in order to provide power at construction sites, where work is conducted round the clock.

In addition, the country is expected to witness the construction and localization of data centers, owing to the supportive government policies and data protection laws. This is further expected to generate a significant demand for power, in turn, augmenting the India gensets market growth during the forecast period.

Lately, players in the industry have developed and launched new products in order to gain a competitive edge in the India gensets market. For instance: 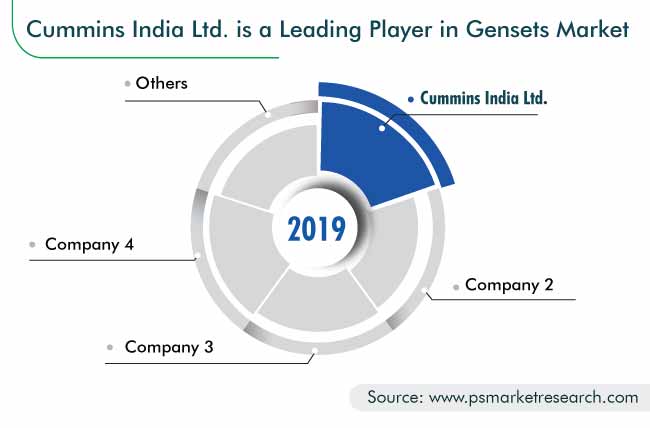 Some of the key players in the India gensets market are:

Based on Power Requirement