The Indian 3D content creation market for media and entertainment industry had a market size of $134.2 million in 2019. The market is further projected to witness a CAGR of 13.9% during the forecast period (2020–2025). The rising adoption of visual effects (VFX) in Indian movies, increasing social media and over-the-top (OTT) platform usage, and expanding Indian gaming industry are the major factors driving the growth of the 3D content creation market in the media and entertainment industry in the country.

The Indian 3D content creation market for media and entertainment industry has shown a slight dip in 2020, owing to the lockdown scenario in India, due to the coronavirus disease (COVID-19). Several factors, such as the halted production of movies and advertisements, have led to the declining purchase rate of 3D content creation software and hardware. 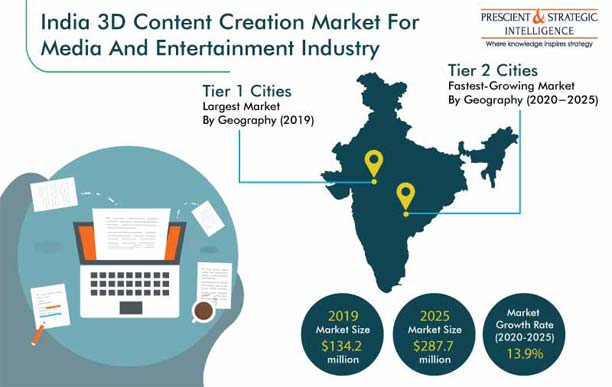 Small- and medium-sized enterprises (SMEs) are projected to witness the faster growth during the forecast period, on the basis of organization. This would primarily be due to the rising number of start-ups that are offering 3D content creation services for small television advertisements, websites, event management or exhibitions, brand or logo designing, print advertisements, digital marketing, and other purposes. Furthermore, SMEs are offering services to regional film industries at a significant level.

The VFX category dominated the Indian 3D content creation market for media and entertainment industry during the historical period (2014–2019), based on end use, and it is further projected to continue being dominant during the forecast period. The country continues to be among the chosen outsourcing destinations for VFX production, as the cost of providing animation or VFX services in India is one-third to one-fourth than that in North American countries. In addition to this, the usage of the VFX technology is also increasing in domestic movies, some of the popular ones among which are 2.0, Life of Pie, Zero, and Shivaay.

Tier 2 Cities To Be Fastest-Growing Geography in Industry

During the forecast period, tier 2 cities, including Ghaziabad, Jaipur, Chandigarh, Nagpur, and Indore, are projected to witness the fastest growth, on the basis of geography, in the Indian 3D content creation market for media and entertainment industry. The fastest growth in the revenue generated by tier 2 cities would primarily be due to the rising number of animation and VFX studios, coupled with the growing number of private training institutes in these cities. A rising number of people in these cities are learning or working with 3D content creation software and hardware, owing to which the number of 3D animation and VFX companies is growing here. 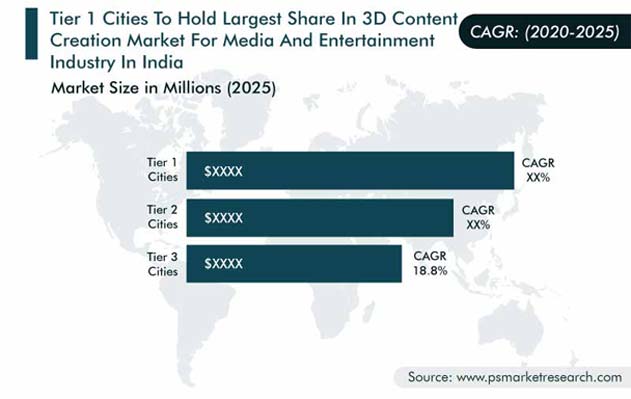 In order to create a more-efficient production process and generate higher revenue, VFX studios are now required to adapt to the latest technological trends. This is especially necessary for SMEs, which don’t have enough capital to operate on the scale of large-sized production studios, and thus experience hurdles in staying afloat. Advanced technologies, such as artificial intelligence (AI), cloud rendering, software-as-a-service (SaaS), light-field capture, and game engines, are finding their way into the VFX space, for enhanced and real-time production. Furthermore, AI and machine learning are being effectively used to bring automation in several areas, such as camera tracking, character animation, and image processing. Thus, the adoption of advanced technologies in VFX and post-production workflows is a key trend that is being observed which is leading to the growth of the Indian 3D content creation market in the media and entertainment industry. 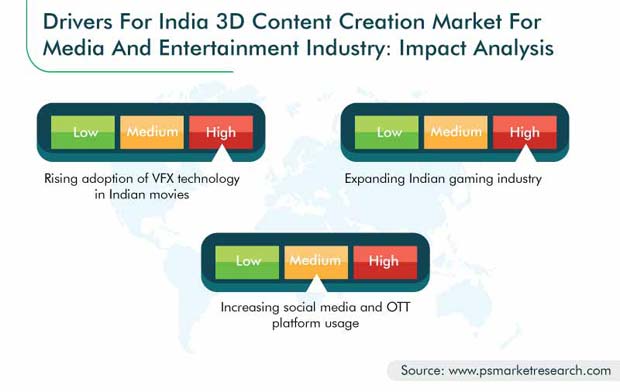 VFX has become a vital element in the post-production of television shows, and the penetration of VFX in Indian movies is also rising. While the film industry in India still requires a lot of improvement, in terms of technology, when compared to international standards, it has made significant advances in the past few years.

The revolution in digital platforms has played a significant role in the growth of the gaming industry in the country. India has been experiencing a rise in online gamers since the past few years, owing to the increasing usage of smartphones with bigger display screens, coupled with an enhanced display pixel ratio, upgraded bandwidth, reduced data cost, advancements in micropayments, and growth in customers’ disposable income.

Additionally, gaming consoles are becoming cheaper, and online games, which offer high-end graphics, are also increasing in number. Additionally, the rapid expansion in the market is inviting foreign investments, which are further boosting the growth of the Indian 3D content creation market for media and entertainment industry.

With the rising penetration of the internet, an increasing number of people are engaging on social media and OTT platforms. People in India are now downloading more applications than the residents of many other countries, with more than 19 billion applications downloaded in 2019 by Indians, accounting for an around 195% growth compared to 2016’s statistics. Furthermore, the usage of OTT platforms, such as Amazon Prime, Disney+ Hotstar, and Netflix, is also experiencing a surge. The subscription revenue for these OTT platforms witnessed an around three-times increase in 2019, from 2018, registering nearly $170 million.

Thus, the rising utilization of social media and OTT platforms is leading to the surging use of the animation and VFX technologies, thus propelling the growth of the Indian 3D content creation market for media and entertainment industry.

In recent years, market participants have launched a number of new and updated software, in order to stay ahead of their competitors. For instance: 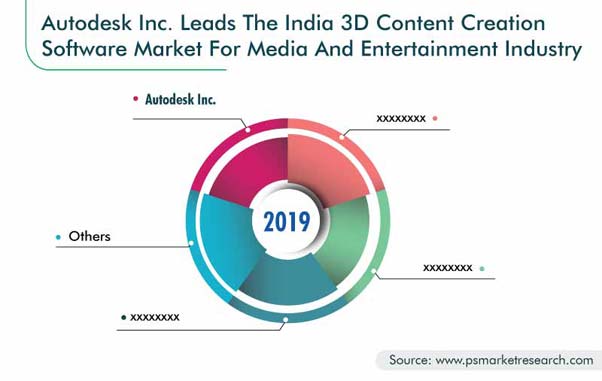 Some of Key Players included in India 3D Content Creation Market for Media and Entertainment Industry Report Are: