Valued at $20.6 million in 2019, the global Huntington’s disease (HD) genetic testing market size is projected to witness a CAGR of 3.1% during the forecast period (2020–2030). The declining cost of genetic tests, high prevalence of HD, initiatives taken by public and private organizations to raise awareness about HD, availability of various types of genetic tests, and presence of a large middle-aged population are the key growth factors driving the market.

The COVID-19 pandemic across the world has impacted the Huntington’s disease genetic testing market negatively in 2020, mainly in the first two quarters. It was mainly due to the lockdowns and closures and restrictions on the movement of people and goods, globally. 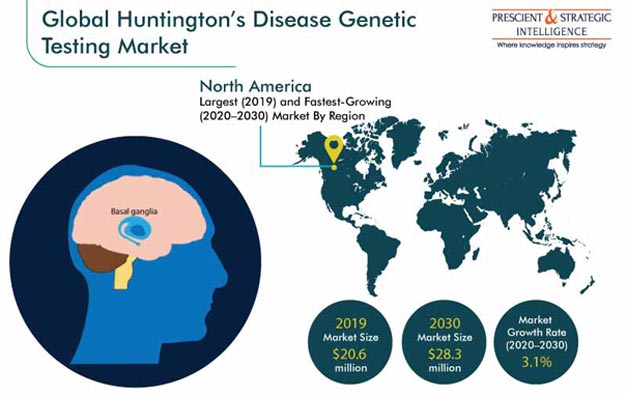 In 2019, the male category generated the higher revenue in the global Huntington’s disease genetic testing market, on the basis of patient gender. This was mainly a result of the slightly higher prevalence of genetic diseases in the male population in many of the major markets. This fact is observable where the prevalence of HD is very high. The category is further expected to witness the faster growth during the forecast period.

On the basis of patient group, the Huntington’s disease genetic testing market was led by the adult category during the historical period (2014–2019). The category is further expected to advance at a healthy CAGR in the years to come, owing to fact that HD is highly prevalent in adults, especially people in the age group of 30–50, who display the highest HD incidence.

North America held the largest share in the Huntington’s disease genetic testing market during the historical period, mainly due to the presence of established market players in the U.S. and high prevalence of genetic diseases across the region. Furthermore, the existence of a large number of places where genetic testing is conducted and high healthcare spending are the other key factors responsible for the region’s dominance on the global market.

The region is further expected to grow at the highest rate during the forecast period, mainly on account of the booming aging population, increasing research on genetic disorders, and rising number of players offering complete genetic testing services in the U.S.

Development and Launch of Genetic Testing Kits Are Key Trend

The industry has been witnessing a rise in the development and launch of genetic testing kits and tests. Several health organizations, companies, and institutes across the world are focusing on research programs for the development of new genetic testing kits for HD. For instance, in January 2019, Asuragen Inc., a molecular diagnostics company that offers easy-to-use products for complex testing in the fields of genetics and oncology, announced the launch of the AmplideX PCR/CE HTT kit. The testing kit detects cytosine–adenine–guanine (CAG) trinucleotide repeats within the Huntington (HTT) gene, which are aberrations associated with HD. The HTT kit has expanded the company’s portfolio of genetic assays. Hence, the development and launch of new and improved genetic test kits and tests can be viewed as a key trend being observed in the Huntington’s disease genetic testing market. 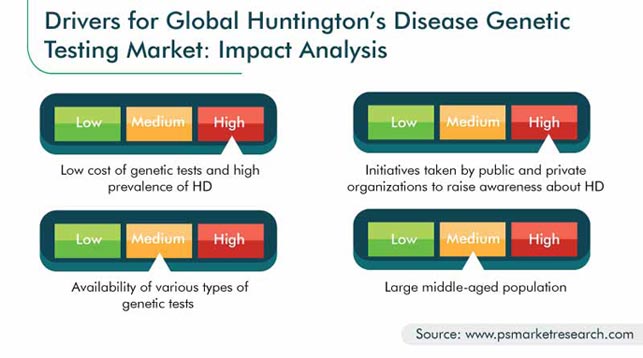 Lowering Cost of Genetic Tests and High Prevalence of HD

The decreasing cost of genetic disorder tests, along with the high prevalence of HD, is driving the global Huntington’s disease genetic testing market. Genetic testing for HD costs between $100 and $200, depending on the nature, complexity, and count of the tests. Due to the low cost of testing and wide availability of test kits for HD across the world, the focus on early diagnosis of the disease has increased substantially. The prevalence of HD is higher in developed countries, such as the U.S., the U.K., and Germany, than the global average. This leads to a high genetic testing volume for HD in developed countries, thus leading to the growth of the global market.

Due to the increasing number of initiatives by public and private organizations to increase the awareness regarding the disease, the global Huntington’s disease genetic testing market is witnessing significant growth. With the increasing focus of researchers on developing new technologies, a large number of public and private organizations are conducting conferences and related events to raise awareness about HD. For instance, the Huntington's Disease Society of America (HDSA) and the University of Colorado, U.S., organized the Annual Huntington's Disease Family Education Day on September 26, 2020. Such initiatives help in creating awareness about the benefits of early disease diagnosis and treatment, thereby impacting the market growth positively.

The large middle-aged population globally is expected to propel the Huntington’s disease genetic testing market. According to the World Bank, the population aged 15–64 reached 5.0 billion in 2019 from 4.5 billion in 2010, worldwide. Symptoms of HD usually develop between the ages of 30 and 50. Therefore, the large base of middle-aged people, especially in developing countries, is expected to drive the market, aided by the advancements in medical sciences and growing focus on genetic testing.

Acquisitions Being Done to Gain Competitive Edge in Industry

Players in the global Huntington’s disease genetic testing market have been focusing on acquisitions and mergers, as part of their strategic move, for increasing their revenue and overall reach in the market.

For instance, in January 2020, Blueprint Genetics Oy announced that it and Quest Diagnostics Inc. will widen the access to actionable insights into rare and genetic diseases and improve patient care, mainly after its acquisition by the latter company. With this, Blueprint Genetics Oy will be able to leverage the capabilities of the latter in next-generating sequencing services.

Some of the key players in the Huntington’s disease genetic testing market include:

Based on Patient Gender

Based on Patient Group