The global horticulture lighting market valued $3.2 billion in 2019, and it is projected to reach $20.3 billion by 2030, witnessing a CAGR of 18.1% during the forecast period (2020–2030). The rising government support for energy-efficient lights, burgeoning demand for agricultural products, and decriminalizing of marijuana use for medical purposes in numerous nations are responsible for the market advance. 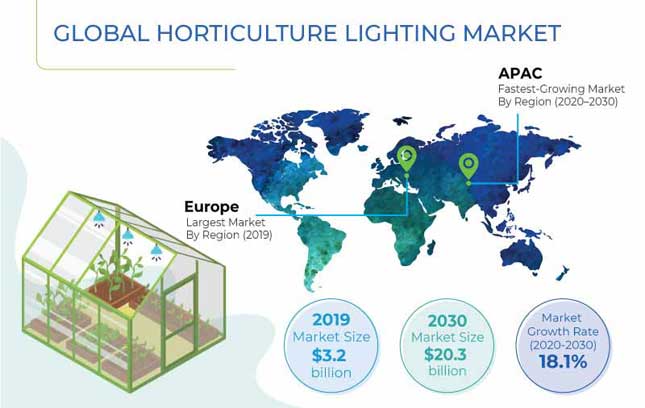 The top lighting bifurcation, under the type segment of the market, held the larger revenue share during the historical period (2014–2019). This is ascribed to the high preference for this way of illumination for indoor and vertical farming around the world.

During the forecast period, light-emitting diode (LED) is expected to be the fastest growing category, based on technology. This is because the usage of LEDs is rapidly rising in greenhouse and indoor horticulture, as they are cost-effective and also offer light of appropriate intensity to promote plant growth, thus resulting in high-quality produce.

The fruits and vegetables bifurcation, on the basis of cultivation, dominated the horticulture lighting market in 2019, as the usage of man-made lighting for the cultivation of vegetables and fruits is significantly higher compared to flowers. Additionally, as per the U.S. Department of Agriculture, the worldwide production of apples, grapes, and pears, in 2019, was 6.7%, 4.3%, and 12.8% higher than 2018, respectively.

Till 2030, the largest revenue share, on the basis of application, would be accounted for by the category greenhouse farming, because most of the horticulture activities happen inside such installations. Compared to 1.21 million acres in 2017, the greenhouse area under vegetable cultivation was 1.23 million acres in 2019. Inside such settings, plants are protected from rain, hail, intense heat and sunlight, and snow.

Asia-Pacific (APAC) would experience the highest CAGR during the forecast period, mainly due to the rising requirement for agricultural products here. APAC is witnessing a robust increase in the population and disposable income, which is why the agrarian community is swiftly turning to indoor and greenhouse farming. 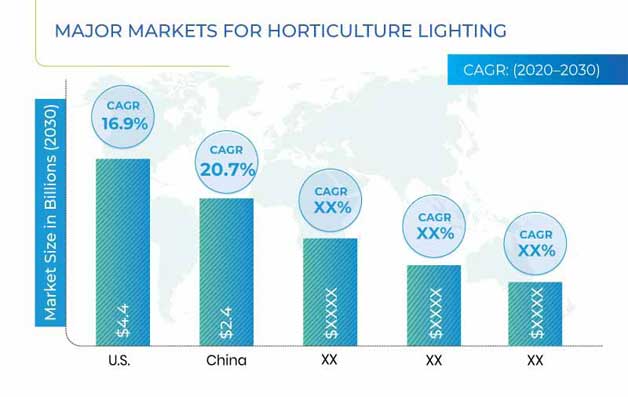 The most prominent trend being witnessed in the horticulture lighting market is vertical farming. Due to the booming population, arable land is reducing, which is pushing farmers to make the maximum use of whatever space they have. Vertical farming involves the growing of crops indoors, in layers stacked atop each other, with artificial light being the only illumination source. This technique can potentially reduce the consumption of water by up to 90% and also help optimize the use of limited space and decrease the requirement for soil. As all these factors ultimately result in less expenditure for agricultural workers, the concept is projected to gain widespread popularity in the coming years.

The most important growth driver for the market is the increasing number of people across the world. As per the latest estimates by the United Nations, the global population would increase from 7.7 billion in 2019 to 8.5 billion in 2030. Due to much of this population boom to be witnessed in China, India, the U.S., and Brazil, these countries would create a heavy demand for food products. This is why numerous nations are focusing on greenhouse and indoor farming techniques to significantly raise their agricultural yield, thereby driving the demand for horticulture lighting products. 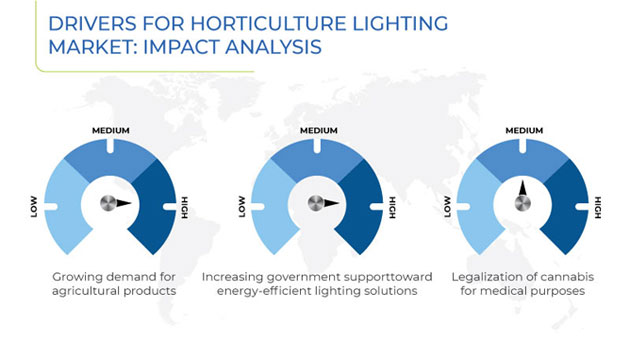 The rapid adoption of advanced agriculture methods in developing countries is a potential opportunity for the industry players. Presently, the usage of artificial lights for farming purposes is quite low, especially in countries such as India, Brazil, and South Africa, but with the growing popularity of the horticulture and indoor crop cultivation concepts, it is expected to pick up swiftly in the coming years. Moreover, with the rising adoption of lighting products, their purchase costs might come down too. Additionally, to conserve energy, the government of numerous countries are extending their support for LEDs, which could be a potential growth area for market players.

In the recent years, numerous innovative and advanced products have been unveiled by the players in the horticulture lighting market, in a bid to increase their customer base and revenue. For instance, in October 2019, the NeoPAR-XO LED was launched by Illumitex Inc., for horticulture. It has an efficiency of 2.6 μmol/J, output of 1,820 photosynthetic photon flux (PPF), and an AI platform which lets farmers track their crops’ development via an integrated camera. 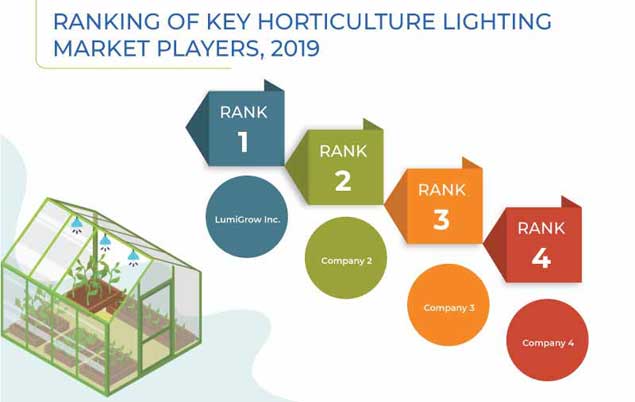