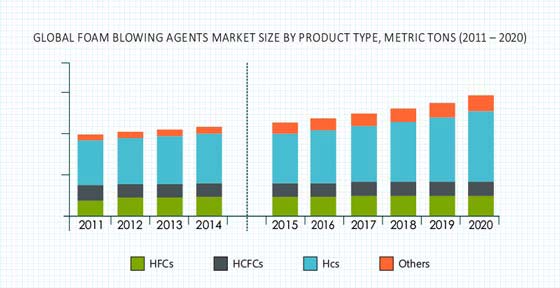 Therefore, CFCs were replaced by another group of blowing agents, i.e. HCFCs, for their low ODP. However, these blowing agents still have ODP, and hence different governments are planning to phase out HCFCs in the coming years. Other alternatives of HCFCs that are being formulated are HFCs with zero ODP; although several regulations are being framed across the world to regulate the usage of HFCs. The reason behind such regulations is high global warming potential (GWP) of HFCs, which is equivalent to CFCs and HCFCs. Therefore, the growth of the HFCs market is anticipated to slow down in the coming years. As of now, the most ecofriendly blowing agents in usage are HCs, HFO, and inert gases among others, owing to their very low GWP and zero ODP.

The global warming and ozone layer depletion are the major environmental challenges across the globe. The government of different countries and international organizations are framing stringent environmental regulations, in order to reduce the emission of greenhouse gases. The conventional blowing agents, i.e., CFCs had high GWP and ODP. These compounds caused severe damage to the ozone layer, following which their usage was banned. HCFCs have been utilized as alternative to CFCs, as their ODP was comparatively low. However, with the development of HFCs (with zero ODP), the consumption of HCFCs started to decline. This was primarily due to the increased government initiatives across the globe. Moreover, HFCs are also not the ideal replacement of HCFCs or CFCs, as their GWP is high and almost equivalent to HCFCs. Such factors accelerated the research and development of very low GWP and zero ODP blowing agents.

The global foam blowing agents market was valued at 332,690.0 metric tons in 2014, and it is expected to grow with a CAGR of 5.3% during 2015 - 2020. The factors driving the growth of the global market include increasing demand for polymeric foams in construction and automotive industries and high demand for foam blowing agents in the manufacturing of polyurethane foam