North America held the largest market volume share, of 29.1%, in 2017. This is majorly ascribed to the stringent fire safety norms in the U.S. and Canada, which make the installation of fire extinguishers mandatory in industrial and commercial spaces. In addition to this, residential spaces are also required to strictly adhere to the fire safety norms. 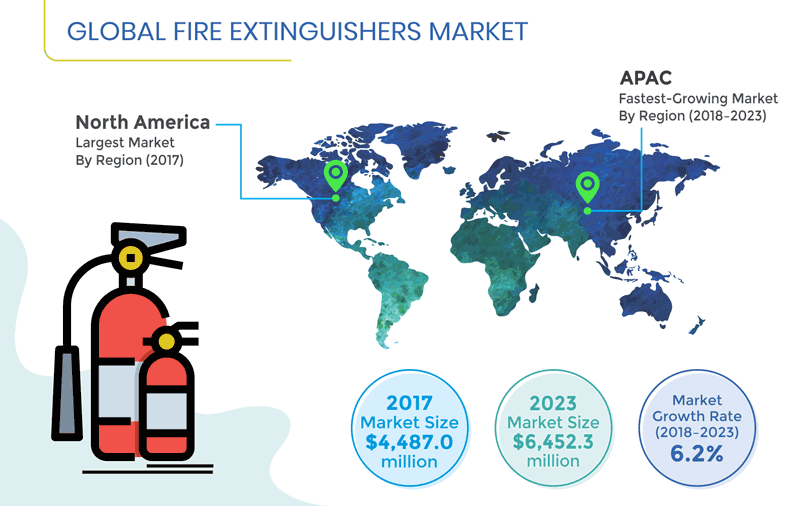 The key trend being observed in the fire extinguishers market is the development of solutions based on new technologies, such as sound. In sound-based fire extinguishers, acoustic waves are produced, which intensify the air velocity, leading to the reduction of the boundary layer of the combustion source. In the coming time, a high demand for such extinguishers is likely to arise for settings such as enclosed spaces, ship decks, and airplane cockpits. In addition, with the development of such new technologies, firefighting practices across the globe are expected to be revolutionized.

The increase in construction activities in developing nations is one of the major factors driving the growth of the global fire extinguishers market. The construction sector has witnessed hefty investments in developing countries, such as China, India, and Indonesia, in addition to those made by developed nations, including the U.S., Saudi Arabia, and Japan. With the swift development of smart cities, industrial plants, and commercial centers, the demand for fire extinguishers is expected to surge, with focus on ensuring safety during fire hazards. 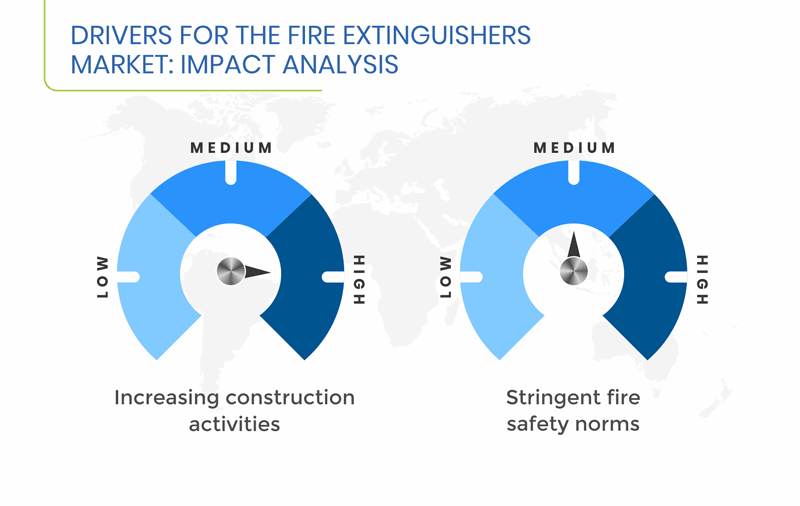 The market for fire extinguishers holds immense potential for growth in developing nations, owing to the high installation rate of such products at residential and commercial real estate projects. With the projected progress of the industry in emerging economies, such as India, China, Brazil, and Thailand, the fire extinguishers market would get ample opportunities for growth in the coming years.

The dry chemical & dry powder category held the largest volume share, of 69.6%, in the fire extinguishers market in 2017, on the basis of product type, and it is projected to reach 78,378.0 thousand units by 2023, demonstrating the highest CAGR, of 5.8%, during the forecast period. Dry- chemical-&-dry-powder fire extinguishers are suitable for different areas, owing to their high effectivity. Since the extinguishing agent in these products is dry in nature, there is minimum damage to electrical appliances at the hazard location. Dry-chemical-&-dry-powder fire extinguishers mostly find application in industrial settings, such as warehouses and manufacturing units.

Portable fire extinguishers held the larger share, in terms of value and volume, both, in the market in 2017, based on portability. Such devices are easy to handle, move, and operate in situations of emergency, owing to which they are highly preferred.

The industrial category accounted for the largest volumetric share, followed by the commercial category in 2017, on the basis of end user. Industrial areas, such as chemical manufacturing sites, have a high chance of fire hazards, owing to circuits bearing high power loads. In order to avoid such mishaps, particularly in developing nations, where the industrial manufacturing domain is witnessing rapid growth, the market demand for fire extinguishers is likely to increase. In addition, the rapid economic transformation, along with large-scale construction of residential, commercial, and industrial units, is expected to create a high-volume demand for fire extinguishers during the forecast period.

Geographically, North America accounted for the largest volumetric market share in 2017. The market in the region is expected to witness significant growth during the forecast period, owing to the large-scale development of new buildings in the U.S. With the construction of residential, commercial, and education infrastructure in the country, fire extinguishers market is likely to prosper.

The market for fire extinguishers in Asia-Pacific (APAC) is expected to demonstrate the fastest growth during the forecast period, owing to the development of smart cities and green buildings, including high-rise commercial and residential buildings. 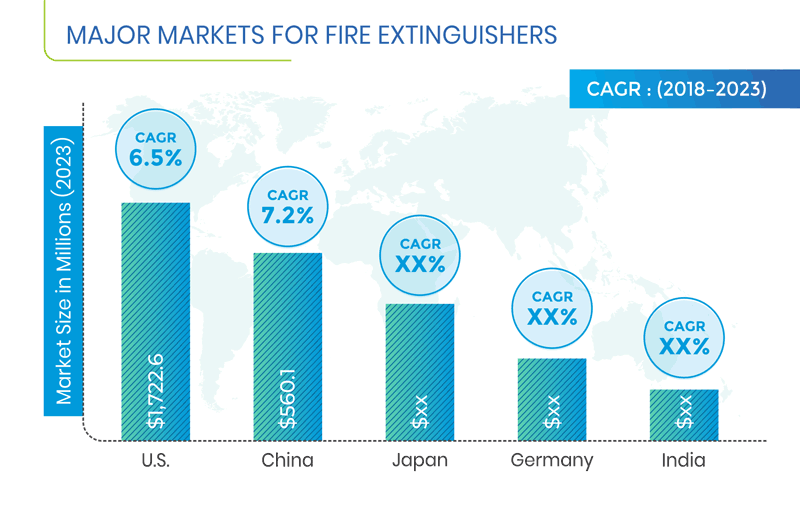 Lately, several players in the fire extinguishers market have taken a number of strategic measures, in order to gain a larger share. For instance, in March 2018, Britannia Fire Ltd. won the contract to install its composite fire extinguishers at the Heathrow Airport. The company would replace around 5,000 traditional fire extinguishers at the airport. Under the contract, Britannia Fire Ltd. would also be invited for product promotion at the Heathrow Business Summit, which would lend the company a significant platform to market its products to potential customers.