The global ethanolamines market stood at $2,933.5 million in 2019, and the market size is expected to demonstrate a CAGR of 5.0% during the forecast period (2020–2030). The rapidly increasing demand for surfactants, along with a surge in the sale of agrochemicals, is propelling the consumption of the compounds, in turn, promoting the growth of the ethanolamines industry.

On account of the ongoing COVID-19 pandemic, the market for ethanolamines has suffered to a certain extent, on account of the temporary suspension of production across downstream plants, particularly in China, in quarter 1 of 2020. However, by late March, production majorly recovered, but downstream ratios were still far lower than Q4 2019. In addition, the European market witnessed a shortfall in imports, owing to plant shutdowns in the U.S., in turn, creating a negative impact on the ethanolamines market 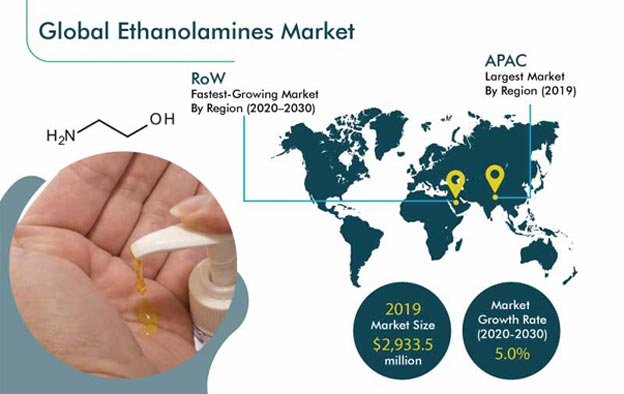 The DEA category held the largest share, based on type, by value and volume both, in 2019, and it is expected to retain its dominance during the forecast period. The high-volume demand is attributed to the vast application base of DEA in soaps and detergents, production of glyphosate, and treatment of refinery products and natural gas. Owing to its wide industrial usage, the consumption of DEA is witnessing an increase. In addition, the increase in the production of herbicides and surfactants across the globe is further propelling the consumption, in turn, promoting the growth of the ethanolamines market.

Surfactants Application To Retain Its Largest Share throughout Forecast Period

The surfactants category witnessed the highest demand in 2019, based on application. The category is projected to retain its dominance in the coming years, on account of the increasing adoption of ethanolamines for the production of industrial detergents, gel-type cleaners, shaving creams, body lotions, shampoos, and soap bars. The demand for the compound, as a surfactant, is primarily driven by its requirement for the production of fatty-acid amides, ability to form foams, upon reaction with lauryl sulfate, and its emulsifying properties. With the increasing consumption of personal care products worldwide, the demand for the chemical is likely to increase, thereby augmenting the ethanolamines market revenue.

Globally, APAC held the largest share in the ethanolamines market in 2019, and the trend is likely to continue during the forecast period. This is majorly attributed to the high-volume consumption of the compound in China. In 2019, the country imported nearly a quarter of its requirement, amounting to 168.4 kilotons, primarily from manufacturers in Thailand and Saudi Arabia.

In addition, a rapid surge in the demand from the end-use industries in regional developing countries, including India, Thailand, and Vietnam, is further propelling the consumption of the compound. With the growth of the end-use sectors in the region, the usage of the chemical is likely to increase, thereby driving the ethanolamines market in the region.

Rest of the World (RoW) To Showcase Fastest Growth

Although the region held a significantly small share in the global market till 2019, it is likely to demonstrate the fastest growth, on account of the opening of large manufacturing facilities in countries including Brazil and Saudi Arabia. With a capacity expansion in such countries, the supply of products has witnessed a rise. In addition, with further expansion plans of manufacturers, in order to leverage the untapped potential of the industry, the ethanolamines market in the region is expected to showcase massive growth during the forecast period. 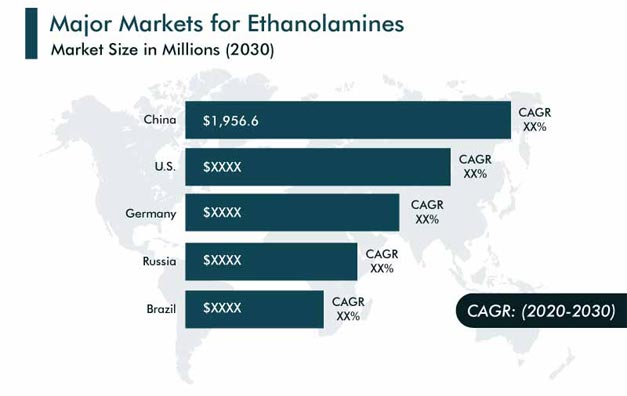 Surge in Demand for Surfactants

The compound is vastly used as a surfactant and emulsifying ingredient in personal care products, such as soaps, shampoos, and laundry detergents. The rise in the disposable income in developing countries has increased the consumption of such products to a huge extent. This, in turn, is propelling the demand for ethanolamines in personal care products. In addition, with the increasing availability and consumer spending, the consumption of such products is expected to further rise, in turn, driving the ethanolamines market.

DEA is vastly used for the production of glyphosate, which is primarily used as a herbicide, in order to prevent unwanted vegetation at farmlands. The consumption of glyphosate has witnessed a surge in countries across APAC, Latin America, and North America, in order to meet the demands for produce being witnessed by the agricultural sector. In addition, the increasing awareness amongst farmers regarding the benefits of using such herbicides is expected to further propel the consumption, in turn, driving the ethanolamines market.

Lately, players in the industry have been putting immense focus on expanding the capacity of their production plants. For instance: 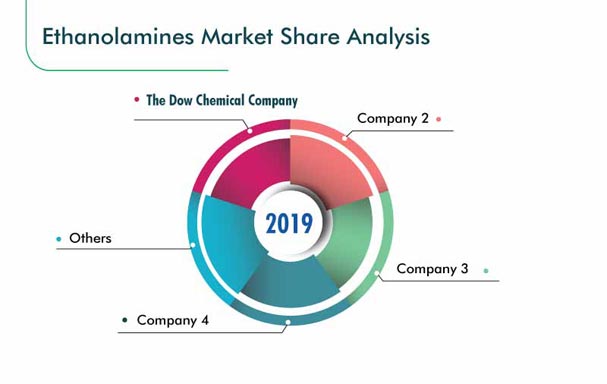 Some of the key players in the ethanolamines market include:

The ethanolamines market report offers comprehensive market segmentation analysis along with market estimation for the period 2015–2030.