Among all regions, the North American EVSE market is projected to witness the fastest growth during the forecast period, in terms of value. The increasing sale of PEVs is leading to the rising number of installations of charging stations across the region. In first three months of 2019, nearly 236,700 PEVs were sold in the U.S., an increase of more than 4,730 units from first three months of 2018. In 2018, the U.S. electric vehicle market was almost doubled to around 360,000 units, with highest sales registered by Tesla Model 3. The sustainable market growth depends on the support of the government in the form of tax credits, incentives, and subsidies. 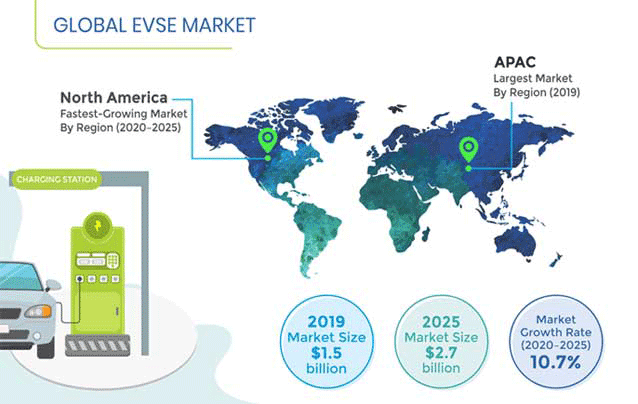 The government is playing a major role in the growth of the EVSE market as it mandates policies and setting targets related to the adoption of electric vehicles and charging infrastructure. For instance, in South Korea, the government has set target to install 10,000 fast electric vehicle chargers by 2022. Similarly, India is targeting to install 2,700 charging stations in cities above four million inhabitants by 2023, including fast and ultra-fast charging stations along major highways. These initiatives are a direct response to the hazardous air quality in these countries, which has been leading to the increasing prevalence of breathing-related diseases, such as asthma and COPD. 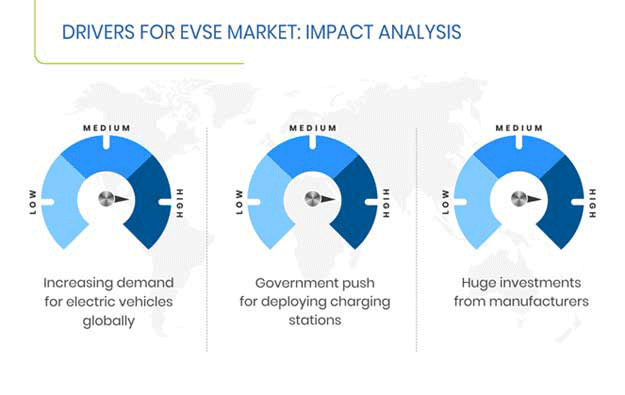 More of AC Chargers Installed till Now than DC Chargers

Alternating current (AC) chargers dominated the EVSE market during the historical period. This is due to the fact that AC charging is the most common charging method for electric vehicle with plug. Charging speed depends on the output power of the charge point and the convertor’s capabilities to convert the power to direct current (DC). Also, these chargers dominate the market due to their low costs, including production, installation, and operation. Due to these factors, it is usually much cheaper to charge the vehicles with AC chargers, which make them more popular for general day-to-day charging. Additionally, most people prefer to charge their personal vehicles overnight, which raises the popularity of AC EVSE.

The market for Level 2 chargers is expected to witness the fastest growth during the forecast period, based on AC charger type. These chargers are comparatively faster, delivering about 15–25 miles of range per hour, wherein Level 1 chargers offer about 4–5 miles of range per hour. Furthermore, Level 2 chargers can fully recharge long-range battery electric vehicles (BEVs) in eight hours and can be found at places like grocery stores, offices, and parking garages.

The DC charger market was dominated by GB/T connector-based charging station. The major reason for the domination of this category is high adoption of these chargers in China. The country has nationwide electric vehicle fast charging standard, known as China GB/T, which was released in 2015. It is mandatory for all new electric vehicles sold in the country to have GB/T connector for charging. Due to this, international vehicle manufacturers, including Tesla Inc., Nissan Motor Co. Ltd., and BMW AG, have adopted the GB/T standard for their electric vehicles sold in China. Hence, the position of China as the largest user of EVs and EVSE has resulted in the highest demand for the GB/T connector.

In application categories, the adoption of public chargers is projected to attain faster growth in the EVSE market during the forecast period. This is majorly due to the robust commitments of governments, automakers, and electric vehicle manufacturers for electric vehicle infrastructure development in different countries. Currently, the biggest issue plaguing mass EV adoption is the range anxiety, which partly stems from the lack of EVSE on roads, highways, and other public spaces. Therefore, governments are installing EVSE, especially DC fast chargers, on roads and other public settings.

Globally, Asia-Pacific (APAC) held the largest volume share in the EVSE market in 2019. This is ascribed to the high adoption of electric vehicles and installation of related charging stations in China in recent years. Furthermore, China held major share in the APAC EVSE industry in 2019. In January 2019, the Chinese Electric Vehicle Charging Infrastructure Promotion Agency (EVCIPA) reported the number of public chargers, which stood at around 330,000 stations (as compare to 67,500 public chargers in the U.S. at the end of 2018). Rising environmental concerns, growing government support in the form of subsidies for electric vehicles and related charging stations, and decreasing total cost of ownership (TCO) are the major factors driving the demand for electric vehicles, which, in turn, is positively affecting the growth of the EVSE market in the region. For instance, under phase II of the FAME India scheme, the Indian government is investing INR 10,000 crore for boosting EV and EVSE adoption. 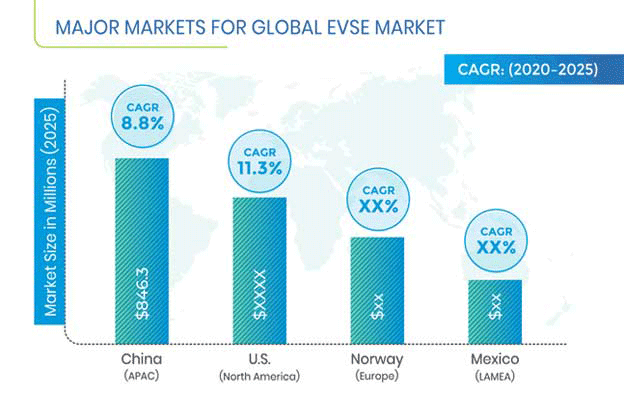 In recent years, the major players in the EVSE market have been involved in product launches, partnerships, and client wins. For instance, in November 2019, ClipperCreek announced the launch of a new plug-in dual electric vehicle charging station, HCS-D40P. HCS-D40P would be a Level 2, 32 A charging station to be installed within a single dedicated 40 A circuit, and would be able to charge two vehicles simultaneously.

In November 2019, Nissan and EVgo entered into a partnership, under which EVgo would offer charging facilities to the owners of Nissan LEAF, under a new program called Nissan Energy Perks. The owner of the vehicle would be provided with prepaid charging credits of worth $250. Moreover, under the program, the customers would be provided the access to more than 1,200 fast chargers across 750 public charging station locations in the U.S.