The global dermatology drugs market was valued at $25,228.2 million in 2019, which is expected to progress at a CAGR of 8.8% during the forecast period (2020–2030). The major factors for the growth of the market include the increasing aging population, rising incidence of skin diseases, escalating disposable income in developing countries, and surging number of research programs.

However, the ongoing COVID-19 pandemic has had a significant impact on the healthcare system. It has reduced the growth rate of the global market due to the rapid shift in focus toward COVID-19 treatment. As a result, the majority of the hospitals have delayed vaccinations pertaining to dermatology, chemotherapy sessions, and other non-essential services. 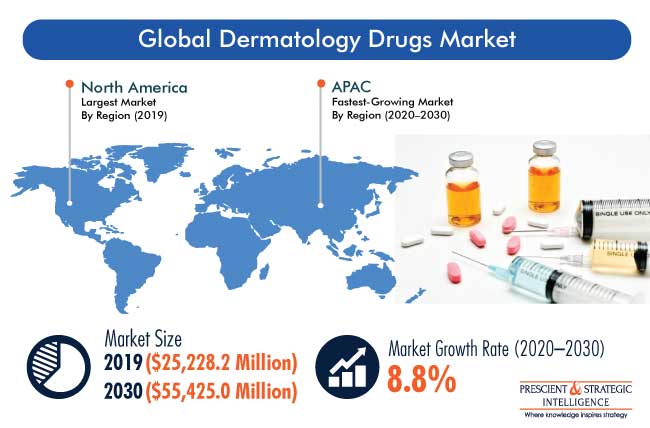 Due to Minimal Side-Effects, Eucrisa Drug Is Expected To Witness Fastest Sales Growth

Based on drug, the Eucrisa category is expected to witness the highest CAGR in the market during the forecast period, as this drug has shown extremely few side-effects as compared to other dermatological drugs. This has acted as a key factor in increasing the demand for this drug for the treatment of mild-to-moderate atopic dermatitis in children and adults.

During the forecast period, the prescription drugs category, under the prescription mode segment, is expected to hold the larger market share. This would be because of the availability of a broad range of prescription drugs, increasing preference for consultation with dermatologists for chronic skin conditions, and growing awareness about skin diseases.

Growing Prevalence of Psoriasis Is Raising Demand for Associated Drugs

In 2019, the psoriasis category accounted for the largest share in the dermatology drugs market, on the basis of therapy area. This was because of the growing prevalence of psoriasis, availability of a broad range of drugs, and rising awareness about the condition.

Based on distribution channel, the direct category held the largest share in market during the historical period (2014–2019), and it will keep doing so during the forecast period. Though over the past few years, e-commerce penetration has increased, the direct mode of distribution still continues to be preferred, as dermatology drugs are majorly sold by the manufacturers themselves.

Hospitals were the largest end user in the industry in 2019, and they are further expected to hold the largest share during the forecast years. This is mainly attributed to the increasing prevalence of skin diseases and rising patient footfall at hospitals for their management. Moreover, with the growing pollution and ozone layer depletion rate, the rising number of skin cancer cases are expected to aid the growth of this category.

North America accounted for the major share in the dermatology drugs market in 2019, and it is expected to continue to dominate the industry throughout the forecast period. This would be due to the increasing awareness on skin diseases and their treatment, presence of numerous established players in the region, high disposable income of the population, and frequent product launches.

Globally, APAC is expected to advance with the highest CAGR in the dermatology drugs market during the forecast period. The major factors responsible for this would be the increasing disposable income, growing number of skin cancer cases, and presence of key players in APAC countries and their engagement in strategic activities to attain a significant market position.

Additionally, the increasing spending in fast-growing economies, such as China and India, on the improvement of the healthcare infrastructure is creating huge revenue generation opportunities for the biopharmaceutical companies in the region. For instance, according to the World Bank, the healthcare expenditure of China was 4.88% of its gross domestic product (GDP) in 2015, which increased to 5.15% in 2017. 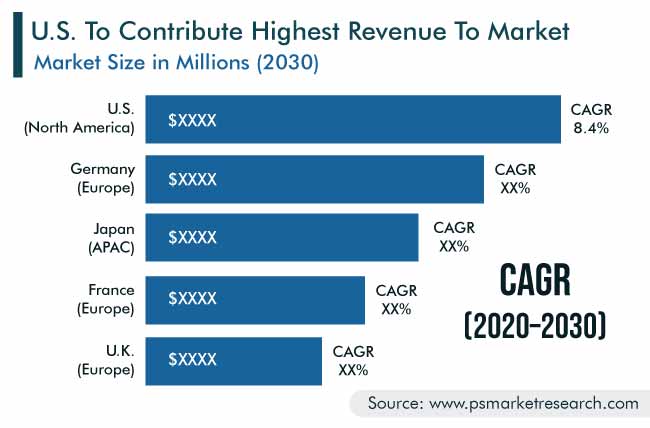 The most-prominent trend in the dermatology drugs market is the product approvals being given by the regulatory agencies. For instance, in May 2020, Sanofi S.A. received the approval of the USFDA for Dupixent (dupilumab) for the treatment of moderate-to-severe atopic dermatitis. Similarly, in April 2020, Bausch Health Companies Inc. and its dermatology business Ortho Dermatologics received the USFDA approval for JUBLIA (efinaconazole) topical solution for the treatment of onychomycosis. 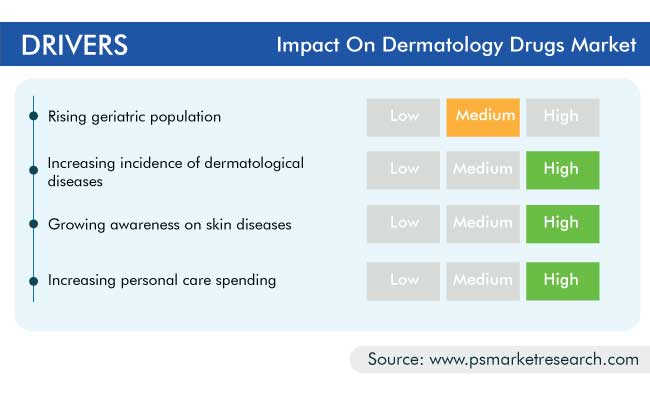 Skin diseases are among the leading causes of the non-fatal disease burden globally. Aging, trauma, and environmental and genetic factors can result in skin diseases. According to the World Health Organization (WHO), skin diseases, which are among the most-common human health disorders, affect almost 900 million people across the world at any given time. Some of the most-common skin diseases reported globally are pyoderma, scabies, acne, eczema, and warts. Acne is the most-common skin condition in the U.S., affecting up to 50 million Americans annually. Furthermore, according to the National Eczema Association, in 2019, 31.6 million people in the U.S. had some form of eczema. Thus, associated drugs are expected to be in a high demand owing to the increasing number of dermatological disease cases, in the coming years.

The increasing awareness related to skin diseases is another key growth factor for dermatology drugs market. Several medical product companies engage in programs to create awareness about skin diseases. For instance, in June 2020, Microbiome Connect Skin USA, a virtual summit, was conducted by Kisaco Research in order to recognize the value of skin-microbiome-based products as the next step in a consumer’s skincare regime. Thus, owing to the rising awareness on skin diseases, the demand for dermatology drugs will increase in the coming years.

With the rise in the disposable income, healthcare spending has increased over time. As reported by the Organisation for Economic Co-operation and Development (OECD), the U.S. recorded a 2.3% increase in its disposable income in 2017 from the previous year. Moreover, the OECD reported that in 2016, around 3% of the total healthcare spending in Germany was for skin diseases. Thus, as people are becoming aware about various skin diseases, they are spending a considerable share of their income on dermatology and related services, which has given a boost to the growth of the dermatology drugs market.

In recent years, players in the dermatology drugs industry have pursued product approvals in order to stay ahead of their competitors. For instance:

The Key Players in the Dermatology Drugs Market Include:

Based on Prescription Mode

Based on Therapy Area