The global denim market valued at $56.1 billion in 2017 and projected to witness 5.8% CAGR by 2023. Asia-Pacific (APAC) is expected to witness the fastest growth in the market, during the forecast period. This can be attributed to the rising disposable income of the people, easy availability of raw materials, and increasing government initiatives for manufacturing of products in the countries such as China, Vietnam, and India. 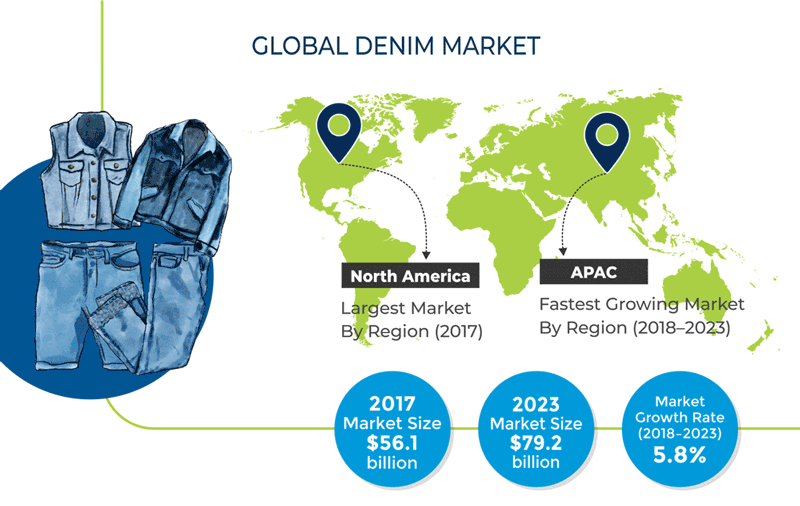 The shifting inclination of consumers toward distressed, cropped, and patched jeans is a key trend in the market. People across the globe are increasingly focusing on trending jeans, including those with cropped hems, as well as boyfriend jeans, two-tone jeans, and skinny jeans. These styles are gaining huge momentum among consumers, especially the younger population, owing to their casual look and promotions through media. Additionally, decorative denims with details such as patches, laces, and embroidery are also being rapidly sold in the denim market.

Proper disposal of used clothes and plastics is becoming a major concern for global environmentalists. The use of large quantities of hazardous chemicals and high emissions of greenhouse gases during the production of denim have been creating a negative impact on the climate. Owing to this, denim manufacturers are now concentrating on effectively controlling the consumption of chemicals, to reduce the degrading environmental effects, by adopting sustainable practices, which is raising the demand for denim recycling across the globe. The concept of sustainable denim clothing is not only gaining popularity in developed nations, such as the U.S. and Germany, but also in developing countries, including China and India. Hence, the growing production of denim from plastic and other recyclable materials is a major opportunity for the denim market players. 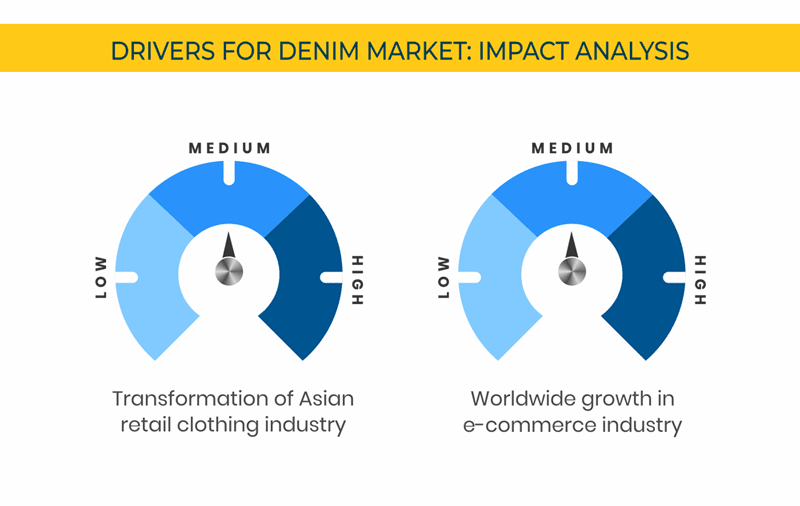 The online distribution channel is expected to register the fastest growth in the denim market during the forecast period. This can be attributed to the rapidly growing e-commerce industry around the globe, with the populace inclining toward online shopping. Additionally, customers now want convenient on-demand shopping, via a platform that lets them choose from a variety of products. Owing to this, the online market for denim clothing is expected to witness robust growth, globally, in the coming years.

Men held the largest share in the market in 2017, due to their high demand for rugged-material and casual clothing. Denim clothing is worn by male consumers for various purposes, such as parties, everyday life, and work.

Geographical Analysis of the Denim Market

Globally, North America was the largest market for denim, in terms of revenue, during the historical period (2013–2017). The growing demand for superior-quality clothing, rising disposable income, and increasing promotion of denimwear by celebrities are the key factors driving the growth of the market in the region.

However, the denim market in APAC is projected to witness the highest CAGR during the forecast period, owing to the improving manufacturing process, swift urbanization, bettering standard of living, increasing disposable income, and expanding working-class population.

The denim market is fragmented in nature. The key players operating in the market include Levi Strauss & Co., The Gap Inc., VF Corporation, H & M Hennes & Mauritz AB, PVH Corp., Kering, Pepe Jeans, S.L., Bestseller A/S, and U.S. Polo Assn. In recent years, the major players in the global denim market have taken several strategic measures, such as product launches, mergers & acquisitions, partnerships, and facility expansions, to strengthen their position in the industry. For instance, in April 2018, VF Corporation completed the acquisition of Icebreaker Holdings Ltd., a privately held merino-wool outdoor and natural-performance outdoor clothing company based in Auckland, New Zealand, for an undisclosed amount. Through this acquisition, the former company aims to become a global leader in merino-wool denim and natural-fiber clothing.

The Denim market report offers comprehensive market segmentation analysis along with market estimation for the period 2013–2023.

Based on Consumer Type