Currently, due to COVID-19, the world economy is facing unprecedented uncertainties. Preventive measures, such as lockdowns and restrictions on mobility, to curb the spread of the pandemic, have led to a significant decline in vehicle sales across all major automobile markets. Electric vehicles have also borne the brunt, but, so far, have been hit less severely. In the worst-case scenario, the electric vehicle industry's gross value added (GVA) could be down by 14–16% (vehicle production) in 2020. 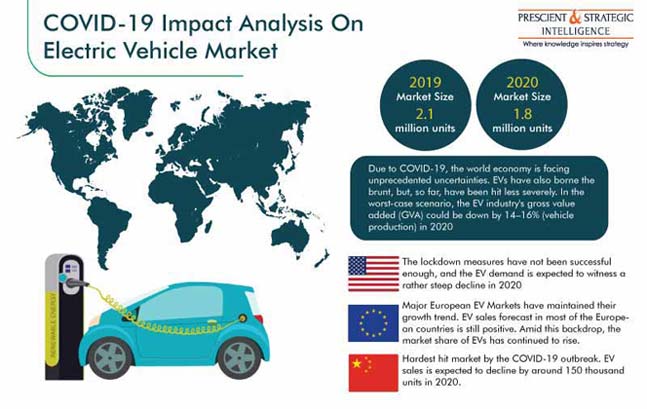 In February 2020, the German government increased the electric car purchase subsidies. In Italy, the impact of the system introduced in 2019 to encourage electric car sales started to positively affect the market. Moreover, 2020 is the target year of the European Union (EU)’s CO2 emission standards, which limit the average CO2 emissions per km for new car sales.

At this moment, electric vehicles are resource guzzlers for original equipment manufacturers (OEMs), rather than something which add value to an already-stressed business. A contraction is inevitable for electric vehicle sales in the short run. A few factors, which have dented the market, are explained below.

On the other hand, a number of factors that suggest the longer-term outlook for the electric vehicle market could remain positive over the next decade and beyond. Opportunities for self-reinforcing cost reductions in electric vehicle production will persist. Resulting from the increasing scale of battery production as well as battery technology improvements, these factors will make it easier for battery electric vehicles (BEVs) and plug-in hybrid electric vehicles (PHEVs) to compete with vehicles using internal combustion engines, in terms of the total cost of ownership.

Furthermore, the interest in and need for policy action on priority objectives, such as mitigating climate change, improving the local air quality, enhancing economic productivity, and fostering industrial development, will continue to be high. These priorities require support for innovation, including industrial progress in the electric vehicle and battery value chains.

OEMs Are Focusing on The New Normal for The Business Ahead