The APAC region is expected to witness the fastest growth in the industry during the forecast period. It can be due to increasing demand for conductive polymers in various applications, such as textiles, capacitors, batteries, actuators, sensors, and display devices. Additionally, the growing economies, such as China and India, with increasing industrialization rate are expected to further drive the conductive polymers market in the region. 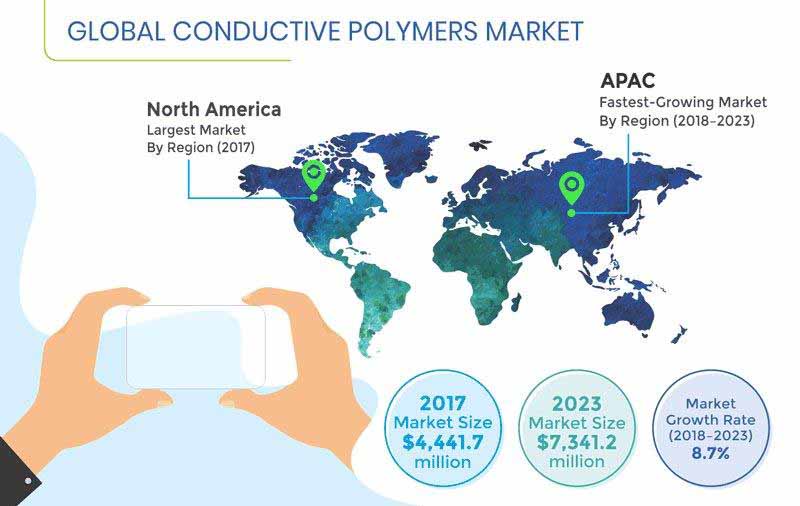 Growing preference for lightweight and high-performing electronic products is a key driver identified in the conductive polymers market. These polymers have high demand for flexible and wearable electronics, displays, other flexible inorganic semiconductors, cell phones, laptops, and other gadgets. With the rising income levels in the developing countries like China and fast-changing consumers’ preferences for lighter and advance electronic products, the demand for conductive polymers used in the production of lightweight electronic items is expected to rise over the coming years. 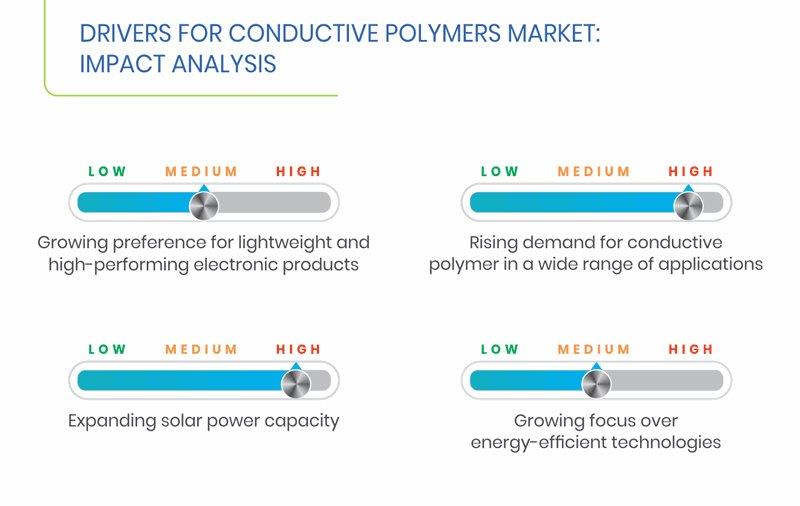 Emerging economies, such as China and India, hold a huge growth opportunity, owing to rise in increased foreign direct investments in different sectors, particularly in industrial manufacturing. Rapid industrialization in these nations over the past few decades has brought a significant change in the use of advanced technology to increase the industrial production. Furthermore, major industries witnessing rapid technological advancements include electronics and automotive where conductive polymers are widely used. With the increasing sales of automobiles and electronic products in emerging economies, the demand for conductive polymers from the end-use industries of these countries is expected to rise in the upcoming years.

The solar cells category under the application segment is expected to exhibit the fastest growth, by value, , with 10.7% CAGR, during the forecast period. This can be attributed to its environment-friendly properties, as it reduces the carbon emission in the production process of electricity.

Globally, North America was the largest market, in terms of value, for conductive polymers during the historical period and is expected to maintain the trend during the forecast period as well. This can be ascribed to the technological advancements by the major industry players for the development of electronic products. Considering the future industry scenario, the U.S. is expected to lead the North American conductive polymers market, generating revenue worth $3,926.0 million in 2023.

During the forecast period, the global conductive polymers market is expected to witness the fastest growth in APAC, mainly on account of the increasing demand for conductive polymers in various applications, such as textiles, capacitors, batteries, actuators, sensors, and display devices. China is expected to lead the APAC market due to expanding electronics industry and increasing demand for electrostatic coatings on door panels and window panes from the residential construction sector. 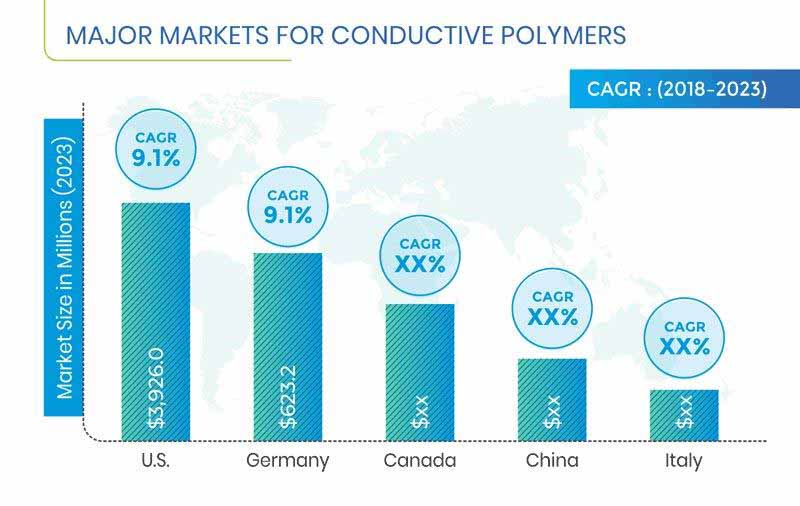 In recent years, major players in the conductive polymers market have taken several strategic measures, such as product launches and facilities expansions, to gain a competitive edge in the industry. For instance, in April 2018, Solvay S.A. launched Evolite F1050 tape for offshore oil and gas applications. Evolite F1050 has chemical and mechanical resistance and is suitable for high temperature applications. It can be used in offshore hybrid flexible pipes and thermoplastic composite pipes (TCPs).

Moreover, in February 2018, The Lubrizol Corporation announced for expansion of its engineered polymers thermoplastics polyurethane (TPU) business, which included new capacity added in North America, Europe, and Asia. The expansion is expected to meet the increased demand for polymers in the different regions.