The global blockchain devices market valued $0.3 billion in 2019, and is expected to register a CAGR of 48.7% during the forecast period (2020–2030), reaching $23.5 billion by 2030. Growing market for cryptocurrencies and increasing demand for blockchain solutions are some of the primary drivers of the market.

Among all regions, North America was the largest market for blockchain devices in 2019, due to an increase in the deployment of emerging technologies, such as the artificial intelligence (AI), augmented reality, and virtual reality (AR/VR), and blockchain. The blockchain technology market in the North America is expected to reach a value of more than $58 billion by the end of 2025. This can be primarily attributed to the growing demand for blockchain solutions from the U.S., where large and medium businesses are investing in adopting blockchain technology. 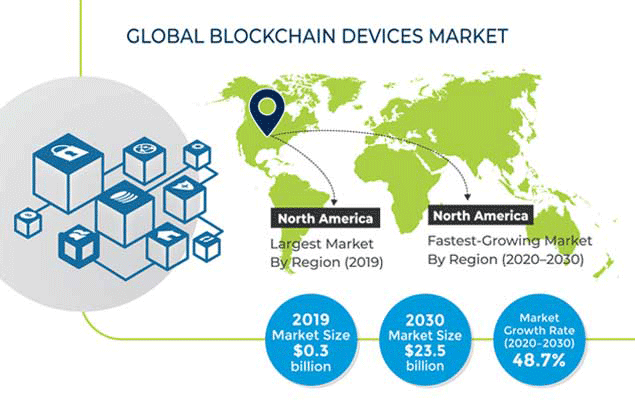 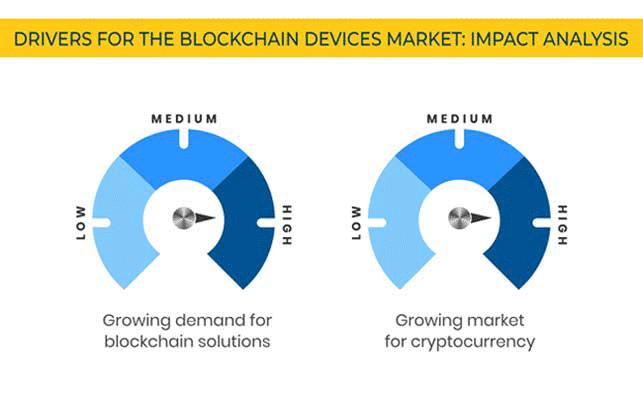 Based on industry, the retail category is expected to register the highest CAGR during the forecast period. Globally, retailers are increasingly adopting the blockchain technology for increasing transparency and consumer confidence, providing guarantee of authentic products, reducing the number of counterfeit products, speeding deliveries, easing logistics, and accepting crypto payments. For instance, currently, in Europe, over 130 coffee shops and more than 80,000 merchants are accepting crypto payments. This is further expected to increase in the near future as more stores would start to install blockchain POS terminals to accept crypto payments.

North America dominated the global blockchain devices market during the historical period. This is owing to the strict government policies regulating the BFSI sector for higher transparency and security. The U.S. held the dominating revenue share in the North American blockchain devices market, owing to the growing spending toward blockchain technology. For example, in 2018, the spending increased by 110%, reaching $1.6 billion, which is further expected to reach $41 billion by 2025. 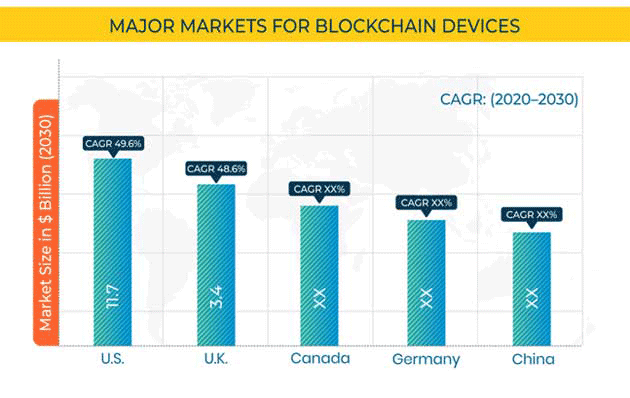 Major players in the global blockchain devices market are focusing on product launches to increase their consumer base. For instance, in September 2019, Samsung Electronics Co. Ltd. launched KlatynPhone, a blockchain smartphone version of its product series Note10 5G and Note10+ 5G for the South Korean market. The smartphone is offered with 2,000 Klay tokens, a cryptocurrency backed by internet company Kakao.

Additionally, in July 2019, RIDDLE&CODE GmbH launched hardware-based blockchain car wallets. These wallets enable users to pay for fuel, parking, and maintenance altogether for a complete journey. Also, to add on to the security, the car wallet would have a function to identify its user using wireless communication technology.