The bismuth nitrate market value was $190.6 million in 2019, and the market is predicted to progress at a CAGR of 5.1% between 2020 and 2030. The growing usage of bismuth nitrate over other bismuth derivatives and expansion of the pharmaceutical sector in the Asia-Pacific (APAC) region are the main factors driving the advance of the market.

The market for bismuth nitrate is predicted to exhibit rapid expansion post the COVID-19 pandemic because of the soaring requirement for the compound in medicated drug formulations. Currently, pharmaceutical companies are increasingly focusing on formulating drugs that can be used in the vaccines for the novel coronavirus. 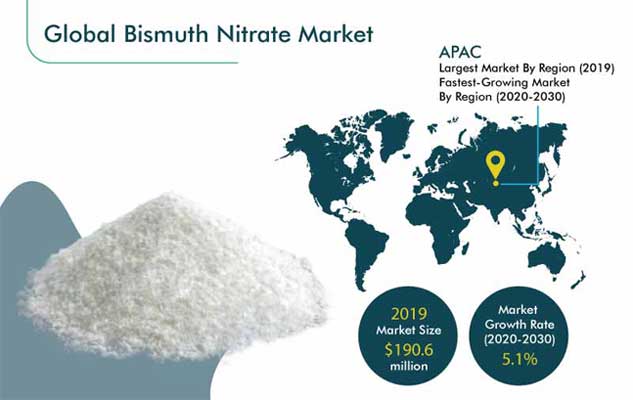 The pharmaceutical grade category generated the higher revenue in the market for bismuth nitrate in 2019, under the grade segment. This is primarily ascribed to the extensive usage of the compound in various drugs. Additionally, the requirement for the chemical is set to shoot up in the coming years because of the huge investments being made in research and development (R&D) activities for discovering new pharmaceutical applications for it in the healthcare sector.

The drug formulation category is predicted to hold the larger share in the bismuth nitrate market in the coming years, under the application segment. This is attributed to the large-scale usage of the compound in the drug formulation processes on account of its ability to prevent damage to the bone marrow and kidneys of cancer patients, which usually happens during cancer treatment. Additionally, drugs made from bismuth nitrate can cure duodenal ulcers. With the growing incidence of these diseases, the usage of the compound as a drug formulator is rising sharply across the world.

Geographically, the APAC region held the largest revenue share in the market in 2019, and this trend is predicted to continue in the upcoming years. The strongest factors fueling this expansion are the soaring investments being made in R&D projects in the pharmaceutical sector for developing drugs for diseases that currently have no cure. Additionally, the increasing prevalence of cancer in the region is pushing up the requirement for pain-relieving drugs, in turn, propelling the demand for the compound.

In this regard, the growing prevalence of cancer is fueling the demand for medicated drugs made from bismuth salts. Thus, in order to meet the soaring requirement for these drugs from healthcare organizations, the consumption of the compound is set to rise massively in the forthcoming years, which will consequently fuel the expansion of the bismuth nitrate market in the APAC region.

Thus, due to the boom in the pharmaceutical sector, the demand for the compound is skyrocketing, especially in India, China, and various Southeast Asian countries. Moreover, the region is a major supplier of medicated drugs to various Middle Eastern and European countries. Due to this reason, many foreign companies are setting up their manufacturing plants and facilities in the region.

Besides the aforementioned factors, the expansion of various end-use industries, especially in the emerging economies of APAC, such as India, China, and several Southeast Asian countries, is fueling the growth of the bismuth nitrate industry in the region.

The increasing usage of bismuth nitrate in cosmetic products, such as lipsticks, nail polishes, hair sprays, and eye shadows, is one of the major trends currently being witnessed in the market. This is credited to the rising public awareness about the benefits of the compound, such as its ability to be used as a source of white pigment in these products. The expansion of the global cosmetics industry is massively pushing up the requirement for the chemical, which is, in turn, augmenting the bismuth nitrate market size. 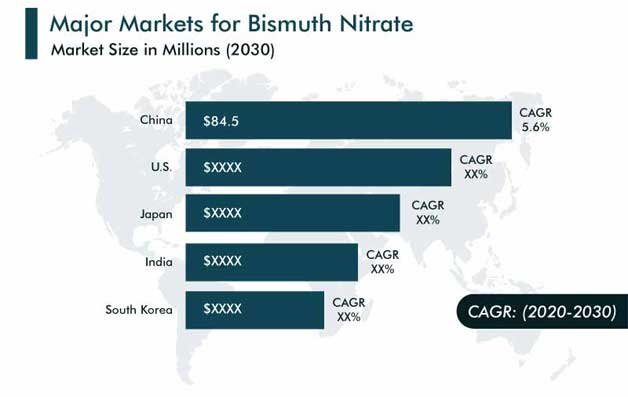 In recent years, several large-scale manufacturing companies have shifted their focus from using bismuth hydroxide, bismuth subcarbonate, bismuth oxychloride, and bismuth subsalicylate to bismuth nitrate, primarily because of the high suitability of the compound as a reagent for the selective oxidation of sulfides to sulfoxides. Additionally, the compound is more affordable and easier to handle than the other bismuth derivatives. Due to these factors, many end users are using the compound as an alternative to organic synthesis, which is required in several applications, thereby driving the consumption of this salt.

The rapid expansion of the pharmaceutical industry in the emerging economies of APAC, such as India, South Korea, and China, due to the macroeconomic growth in these countries, surging R&D investments, and increasing population of geriatric patients, is driving the demand for bismuth nitrate. Moreover, the surging production of pharmaceutical drugs, especially in India and China, due to the soaring requirement for proper access to medication and healthcare facilities, on account of the fact that they are two of the most-populated countries in the world, is also boosting the bismuth nitrate market.

Additionally, the growing incidence of cancer is propelling the requirement for drugs made from this salt in the APAC region. This is because the drugs containing this compound have the ability to treat the kidney damage caused because of chemotherapies. Furthermore, the consumption of these drugs massively reduces the chances of bone marrow damage, which usually happens during radiation, and digestive tract infection (Helicobacter pylori), which can subsequently cause the formation of ulcers.

Market Players Entering into Strategic Agreements Along with Geographical Expansion

In the recent years, players in the industry are entering intro strategic agreements, as well as are expanding their geographical presence, in order to gain a competitive edge. For instance:

In January 2019, The Shepherd Chemical Company announced an $8.5 million expansion of its Mirecourt, France European operation. The projected growth path at the Mirecourt location includes the addition of a third reactor, a new warehouse, and upgraded R&D pilot facilities.

In September 2019, The Shepherd Chemical Company signed an exclusive distribution agreement with Everchem Specialty Chemicals for BiCAT polyurethane catalysts in the U.S. and Canada. This strategic partnership with Everchem Specialty Chemicals will bring the ability to better serve customers with more packaging options, a broad portfolio of urethane raw materials, and improved ongoing technical support. 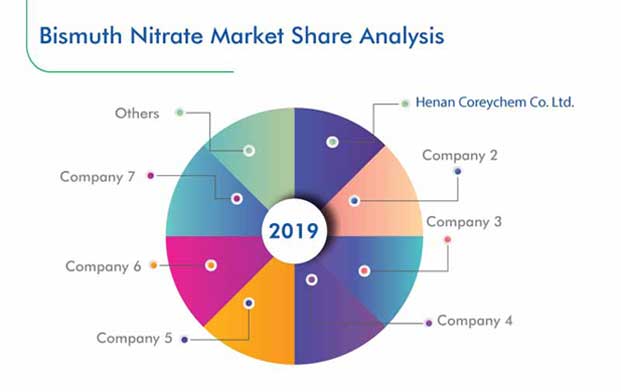 Some of the key market players in bismuth nitrate market include: