In 2014, the global biorefinery market stood at $ 432.4 billion, which is projected to witness a growth rate at a CAGR of 14.0% during the forecast period. This significant growth rate is ascribed to the growing demand of energy independence across the globe.

Biorefinery refers to the facilities, which converts biomass into power, heat, fuels, chemicals and several other beneficial byproducts. It is an analogous to the conventional petroleum refineries which produces a various kind of fuels and other useful products from crude oil feedstock. In addition, refinery utilizes several kinds of biomass, including wood, agricultural crops, residues, weeds, forest, sea, algae, and organic residues. Several types of energy crops, such as herbaceous plants are required to be grown for input in biorefinery. Several techniques, including fermentation, pyrolysis, esterification, gasification acid hydrolysis, and fractionation are used for the conversion of biomass into useful products such as chemicals, materials, and energy. 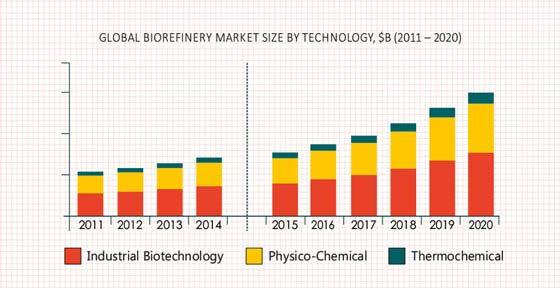 Based on the technology, the biorefinery market is classified into industrial biotechnology, physico-chemical, and thermochemical. Among these technologies, thermochemical technology is projected to witness a highest growth (17.3% CAGR) during the forecast period in the global market. In addition, the industrial biotechnology accounted for the largest market share with value of $ 224.8 billion in 2014, which is expected to reach $ 447.3 billion by 2020, with a promising CAGR of 13.0% during the forecast period. On the basis of region, North American biorefinery market held the largest market value which stood at $311.3 billion in 2014.

Several countries across the globe are trying to gets free from dependence on importing crude oil. As per the Renewable Energy Directive (RED), the European Union alone set a target of at least 20% of its total energy demand generated by renewable energy sources by 2020. Similarly, the U.S. renewable fuel standard program was created to reduce greenhouse gas emissions and expand renewable fuels sector in U.S. In addition, biofuels are the most efficient alternatives for the fossil fuels, as it can be produced locally.

Additionally, the implementation of stringent environmental regulations in several countries, are also generating the demand for the efficient and less polluted energy sources, which in result fuels the growth of the biorefinery market globally. However, the requirement of high initial capital investment and uncertain global economic conditions are expected to hinder the growth of the market to some extent.