The automotive regenerative braking systems market size was $6,555.6 million in 2017, and it is projected to exhibit a CAGR of 18.6% during 2017–2023. The market is primarily driven by the burgeoning demand for environment-friendly and fuel-efficient vehicles. The escalating environmental concerns have impelled automobile companies to adopt certain technologies, such as regenerative braking systems (RBS), that can mitigate the exhaust emissions and fuel consumption of vehicles.

The battery category, within the storage type segment of the automotive regenerative braking systems industry, held the largest share in 2017, of more than 70.0%. The ultracapacitors category is expected to witness the fastest growth in the coming years because ultracapacitors have better charge–discharge capacities than other storage devices, and they can burst a higher amount of power even at –40 degrees Celsius.

The passenger cars category is expected to hold the larger share, in terms of value, in the foreseeable future, on the basis of vehicle type. This can be attributed to the expanding electric and hybrid passenger car market. 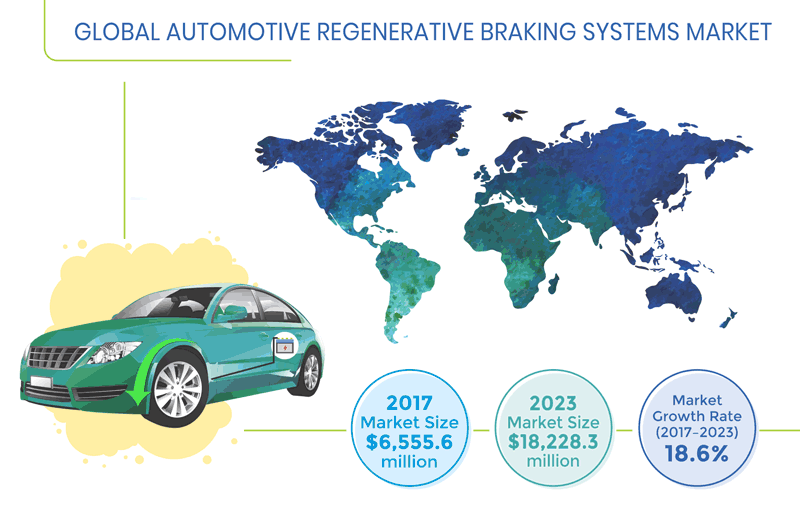 Geographically, the Asia-Pacific (APAC) region held the largest share in 2017, of around 65.0%. Additionally, the regional automotive regenerative braking systems market is expected to advance at a rapid pace due to the soaring demand for fuel-efficient hybrid and long-range battery electric vehicles. Besides, the stringent government regulations regarding greenhouse gas (GHG) emission curtailment in India, South Korea, Japan, Singapore, and China and the escalating demand for RBSs from EV manufacturers are expected to steer the growth of the market.

The stringent government legislations on tailpipe emission by vehicles are one of the major drivers for the market growth. Numerous environmental agencies and transportation departments have implemented emission norms to reduce carbon levels by controlling vehicular pollution. For instance, in 2015, the European Union (EU) drafted regulations for a decarbonized transport system in Europe. These rules aim at limiting the carbon dioxide (CO2) emissions from passenger cars to 95 grams per kilometer (g/kg) until 2021 and those from commercial vehicles to 147 g/km until 2020.

Similarly in the U.S., the Environmental Protection Agency (EPA) has introduced the Tier 3 norms to reduce carbon emissions from vehicles. The increasing compliance with such regulations acts as a catalyst for the growth of the automakers across the world are adopting this technology because it is capable of controlling exhaust emissions to a significant extent.

The progress of the automotive regenerative braking systems market is hindered by the high manufacturing cost of this advanced system. An RBS comprises energy harnessing components, which recover energy from the braking parts, and energy storage reservoirs, including batteries, ultracapacitors, and flywheels. Owing to the critical nature and high functionality of these components, their production cost is higher than that of traditional braking parts. However, technological advancements, the commencement of mass production, and high adoption rate are expected to reduce their manufacturing cost in the future.

The increasing demand for ultracapacitor-based RBS creates a huge growth opportunity for the market. In comparison to batteries, ultracapacitors are 30% more efficient, require low maintenance, and have a 60-times-higher energy storage capacity. Apart from this, ultracapacitors can recharge and discharge quickly, deliver a notable amount of power swiftly, and efficiently work during periods of peak power demands.

The key players in the global automotive regenerative braking systems market are adopting strategies such as partnerships/agreements/collaborations, business expansions, product launches, mergers and acquisitions, among others. Innovative products and services, pricing strategies, market initiatives, and developing and extending the product lines are some of the initiatives undertaken by the market players to maintain competition in the industry. 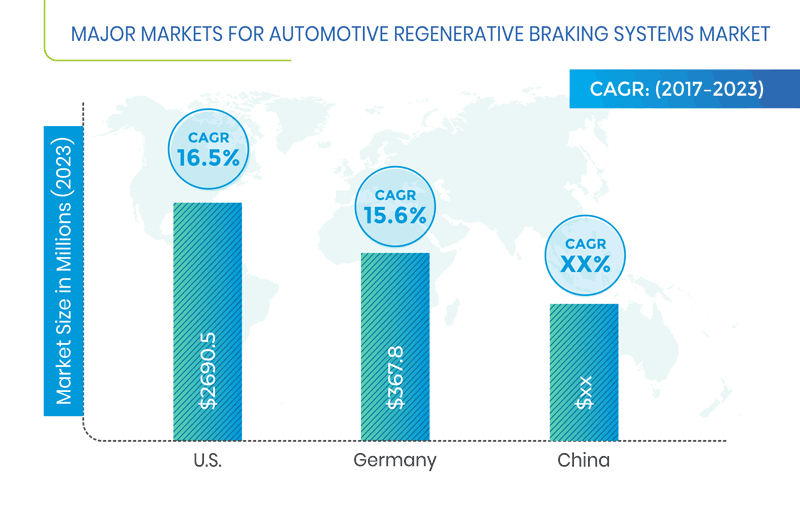