Globally, the aftermarket is predicted to exhibit the fastest growth in the Asia-Pacific (APAC) region from 2020 to 2030. This is credited to the fact that the APAC region is currently the world’s largest passenger car market, and it is, therefore, witnessing the expansion of aftermarket players. India, South Korea, Japan, and China are the major countries offering lucrative growth opportunities to companies offering replacement automotive parts and vehicle repair and maintenance services. 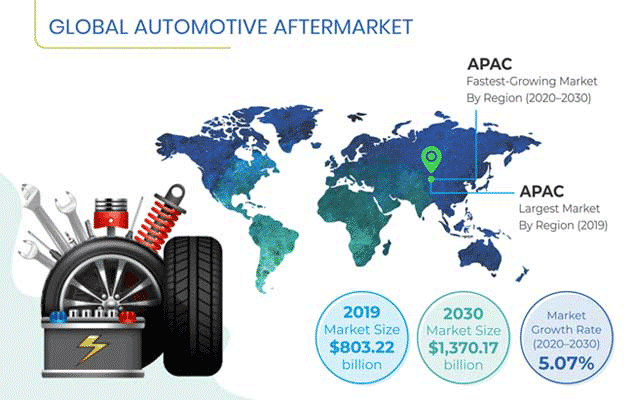 The increasing age of vehicles is one of the major factors driving the advance of the automotive aftermarket, especially in developing regions, such as Latin America, Middle East, and Africa (LAMEA) and APAC. For example, in China, the average age of automobiles is predicted to increase from 4 years in 2010 to 6 years by the end of 2020. This would be because of the provision of stretched car loans in the country for 4–5 years, rapid advancements in the quality of automobiles, and increasing incorporation of technologically advanced components in automobiles.

Apart from China, many other developing nations, such as India and Brazil, are predicted to witness a sharp surge in the average age of automobiles in the coming years, which will, in turn, create lucrative growth opportunities for those offering replacement parts and maintenance and repair services. Aftermarket component manufacturing companies will compete with each other and devise new strategies, such as building a strong e-commerce presence and developing a wide product portfolio, for gaining new customers.

Apart from the aforementioned factor, the growing deployment of electric vehicles and rapid electrification of powertrain systems around the world, on account of their greater eco-friendliness than the conventionally used vehicles and systems, and the implementation of favorable government initiatives are creating growth opportunities for the aftermarket players. 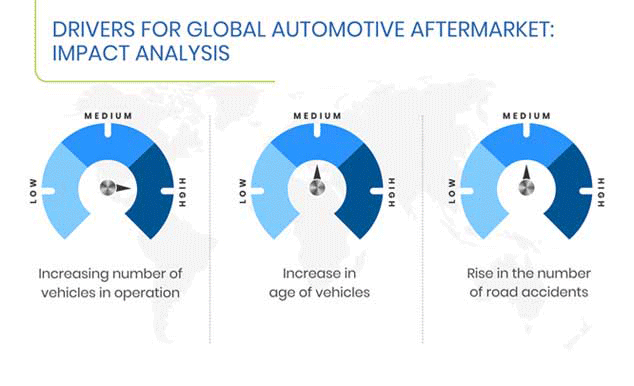 The engine parts component category held the largest automotive aftermarket share from 2015 to 2019. This was because of the enactment of strict government regulations and policies regarding vehicular emissions and surge in the number of vehicles in operation (VIO) across the globe. Out of the different engine parts, the fastest growth in demand is predicted to be experienced by powertrain components and other parts in the coming years.

The equipment category is predicted to register the fastest growth in the market in the forthcoming years. This category includes wiper and washer systems, headlights and lighting components, dashboard instruments, and various other pieces of equipment.

The online category is predicted to demonstrate the faster growth under the distribution channel segment, in the upcoming years. This is credited to the benefits offered by online retailers, such as heavy discounts, home delivery of bulky parts and components, and easy payment options, for attracting customers.

The APAC region held the largest share in the market in 2019, and this trend is predicted to continue in the forthcoming years. The rapidly increasing number of VIO, especially in China and India, is the major factor driving the advance of the automotive aftermarket in this region. With this surge and the existence of prominent tier-1 suppliers, the market is predicted to demonstrate the fastest growth, at a CAGR of 5.64%, in the APAC region from 2020 to 2030. 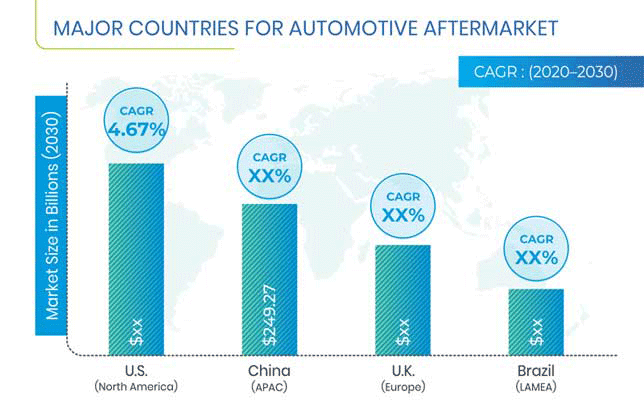 In recent years, the major players in the industry have taken several strategic measures, such as product launches, partnerships, and facility expansions, to gain a competitive edge in the industry. For instance, in December 2019, BorgWarner Inc. announced the portfolio expansion of its original-aftermarket products. In January 2020, the company became the exclusive aftermarket distributor of Beru glow plugs, glow plug controllers, and ignition coils. This will provide more streamlined distribution to its aftermarket customers in Europe. In addition, the company plans to expand its aftermarket portfolio for all-wheel drive (AWD) couplings.

In addition, in September 2019, DENSO CORPORATION announced the expansion of the DENSO Hokkaido Corporation plant. The company will invest about $101.2 million (JPY 11 billion) by 2025, to complete the expansion and increase the production. The construction is scheduled to start in July 2020 and complete in June 2021, after which the increased production will begin in stages, by October 2021. Moreover, the expansion will increase the production of semiconductor sensors, in line with the automotive aftermarket company’s efforts to strengthen its manufacturing system.