Automation as a Service (AaaS) Market

The global automation as a service (AaaS) market was valued at $2.9 billion in 2017, and is expected to generate $10.9 billion revenue by 2023, exhibiting a CAGR of 23.9% during 2018–2023. Greater ease of doing business, surge in demand for virtual workforce, and decreasing cost of automation software and services are the key factors driving the growth of the market across the globe. As per analysis, among all regions, Asia-Pacific (APAC) is expected to witness fastest growth during the forecast period. This can be due to rising economic growth, increasing investment in IT infrastructure, and significant adoption of emerging technologies. 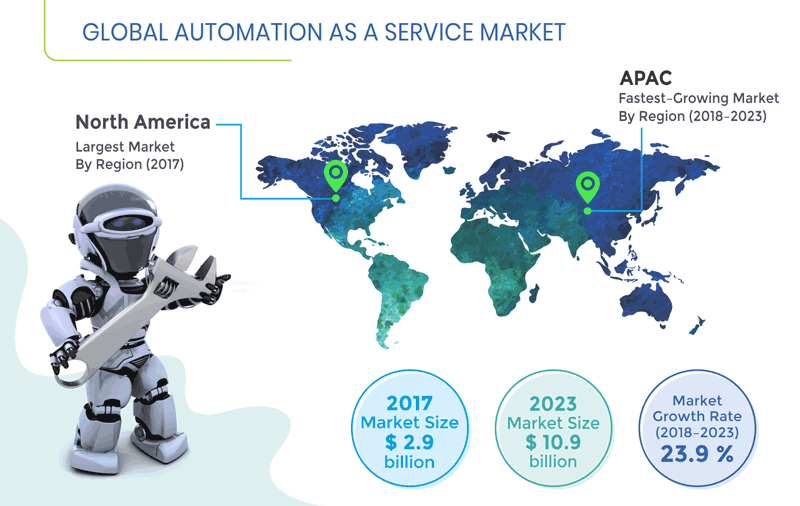 Reduction in workforce cost in one of the major factors driving the growth of the automation as a service market worldwide. AaaS enables enterprises to form virtual workforce, which is capable of performing several tasks with high efficiency, eliminating the need for human intervention. It offers high scalability and reduces operational cost by 25–50%, as virtual workforce has the capability to work round the clock.

Increasing adoption of emerging technologies in the BFSI industry offers immense growth opportunities to the AaaS software vendors in the automation as a service market across the globe. The industry generates a huge volume of data that can be documented and analyzed with precision through AaaS. The adoption of AaaS in the BFSI industry would significantly cut the time spent on accounting, documenting, calculations, invoicing, and other critical functions, resulting in enhanced efficiency of the system and streamlined BFSI operations. 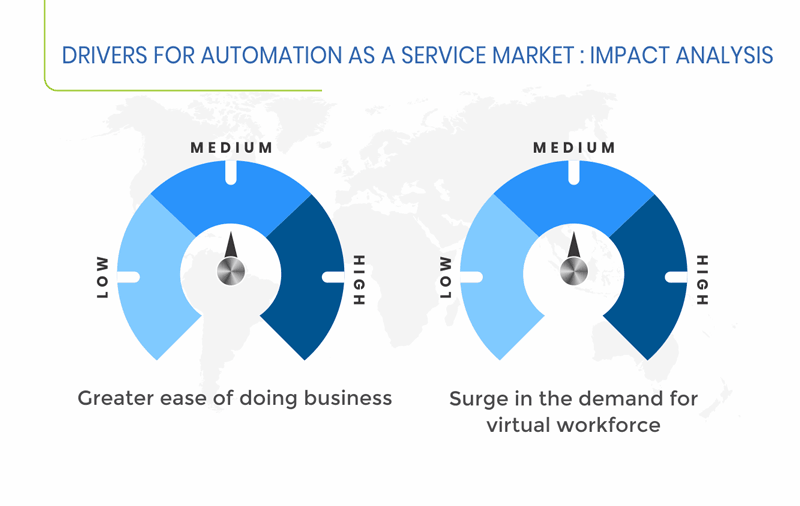 The service offering category is expected to witness faster growth in the automation as a service market during the forecast period. This can be attributed to the consulting services and increasing demand for integration and implementation.

The rule-based category held the larger market share in 2017. This is attributed to the fact that automation programming of the process is the most deployed automation solution due to the higher demand for automating several tasks, which are least complex and do not require high cognitive abilities.

The large enterprise category in terms of enterprise size held the larger share in the market in 2017. Large enterprises have several complex processes, which need to be automated to save time and reduce redundancies as well as errors occurring manually.

The sales & marketing process category is projected to grow fastest during the forecast period in the automation as a service market. This can be due to high requirement of engaging the customers, managing the billing processes, and several other works.

The hybrid category in terms of deployment is witnessing the fastest growth rate, of 26.7%, during the forecast period. This can be attributed to increasing use of AaaS solution with existing on-premise infrastructure for greater scalability and control.

The BFSI industry category held the largest share in the automation as a service market in 2017. Increasing demand for automation in processes, such as customer service, compliance, invoice digitization, credit card approvals, mortgage processing, fraud detection, know your customer (KYC) process, ledger update, report build-up, and account closing process, is driving the adoption of AaaS software in the industry.

Geographical Analysis of Automation as a Service Market

Based on region, North America held the largest share in the global automation as a service market in 2017. This is primarily attributed to the growing service industry in the region. In addition, presence of a large number of big enterprises, large IT spending, and technological advancement are some of the other factors supporting the growth of the market. On the other hand, APAC is expected to witness fastest growth during the forecast period. This can be due to the surging service industry in developing countries, such as China and India, increasing digitalization, economic development, and increasing adoption of new technologies. 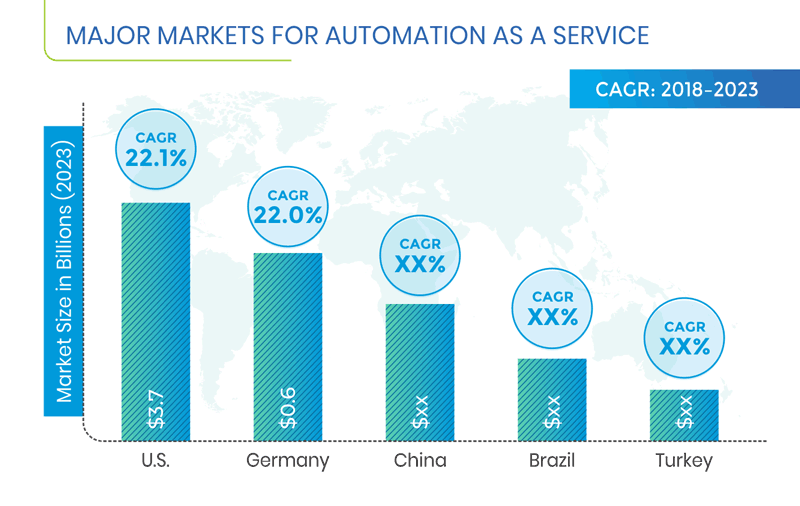 Competitive Landscape of Automation as a Service Market

Recent Strategic Developments of Automation as a Service Players

In recent years, major players in the automation as a service market have taken several strategic measures such as mergers & acquisitions, product launches, and geographical expansions, to remain competitively ahead. For instance, in July 2018, Accenture plc acquired Kogentix, a provider of big data and AI services and solutions, for an undisclosed amount. The acquisition is aimed at strengthening Accenture Applied Intelligence services in North America.

The automation as a Service (AaaS) market report offers comprehensive market segmentation analysis along with market estimates for the period 2013–2023.

Based on Business Process