The global class D audio amplifier market generated revenue worth $975.2 million in 2015 and is expected to advance at a CAGR of 13.8% during the forecast period (2016–2022). The demand for class D audio amplifiers is on the rise globally, on account of their capacity to amplify low-amplitude sound signals to high-amplitude sound signals and increase the battery life of the devices they are used in. Additionally, the growing demand for smartphones, multi-channel audio–video (AV) receivers, premium automotive audio systems, light-emitting diode (LED), liquid crystal display (LCD), & plasma televisions (TVs), and portable hearing aids is supporting the market growth. 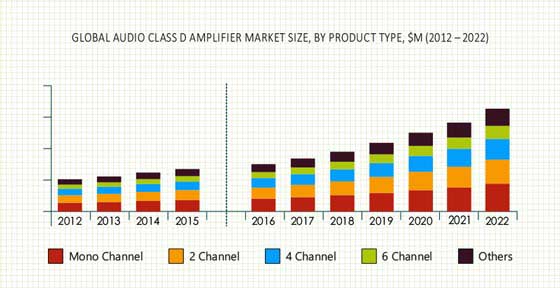 On the basis of market type, the class D audio amplifier market is classified into original equipment manufacturers (OEM) and aftermarket. Of these, the OEM category held the larger revenue share in 2015 and is projected to register higher CAGR, of 13.9%, during the forecast period. This can be attributed to the shift in manufacturers’ focus toward emerging markets and increasing differentiation in customer requirements.

Based on application, the market is categorized into TVs, portable music devices, automotive audio systems, and others. Among these, automotive audio systems held the largest share in the class D audio amplifier market in 2015. This can mainly be ascribed to the increasing rate of car ownership among tech-savvy, younger age groups in addition to the rising disposable income of the people. This, in turn, is propelling the demand for class D amplifiers around the world.

On the basis of product type, the class D audio amplifier market is categorized into mono-channel, 2-channel, 4-channel, 6-channel, and other amplifiers. Among these, the mono-channel category contributed the highest revenue to the market in 2015. This can be mainly imputed to the rise in demand for mono-channel class D amplifiers for cell phones and portable music systems in recent years.

Moreover, the exclusion of the LC filter owing to the advanced modulation technology from class D amplifiers has contributed significantly to their acceptance in high-power audio applications in recent years. The conventional class D amplifier comes with an external LC filter that extracts the audio signal from the pulse-width-modulated (PWM) output waveform. The elimination of the LC filter has helped reduce electromagnetic interference (EMI), board space requirement, and amplifier cost, thus supporting the product adoption in portable and cost-efficient audio devices.

However, despite the increased penetration of class D amplifiers in portable music systems, the system-level design of the amplifier remains a major concern for audio system designers. Besides, ensuring optimized performance of such amplifiers in low-voltage applications remains a challenge for these designers. One of the most speculated design considerations for these amplifiers is the selection of the output filter. With a declining profit margin in the portable audio system market, the trade-off between the cost and the performance of the output filter is a major challenge for system-level designers in the class D audio amplifier market.

Key questions answered in the report